Emma Amaize, Regional Editor, South South
IF there is any project the Delta State governor Dr. Emmanuel Uduaghan has been so maligned for, it is the Asaba International Passenger and Cargo Airport. He was accused not only of inflating the contract sum but also of using it as a conduit pipe to siphon state funds.

In fact, his accusers said the project was a failed project. The foundation for the N17.5 billion Asaba airport was laid on May 7, 2008 by the former national chairman of the Peoples Democratic Party, PDP, Prince Vincent Ogbulafor and its completion date was delayed due to expansion works that were added to the original design. The first aircraft that ever landed theairport was on Overland Airways’ ATR42 (5N_BND), March 23, chartered by the Delta State Government with Governor Uduaghan and other state officials on board. 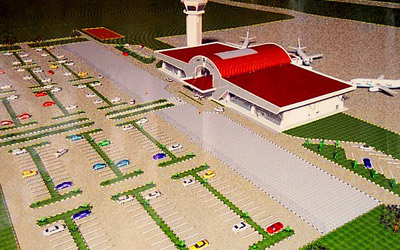 Commercial flights have resumed from the airport since then. Indeed, the administration of Chief James Onanefe Ibori had muted the idea of building a standard airship in Asaba, the state capital as one of its legacy projects aimed at infra structural development of the state. It was intended at completion, to enhance air travels, generate more revenue and thus, increase the financial base of the state.

The scope of works at the airport, which many did not know because they did not find out included, a 3km Runway, 45m wide; 49, 500sq meters of Apron; Parking space for about 200 cars;. Terminal building of approximate total area of 3,600sq meters; Taxiway of 2.0km long; Blast pad of 5,000sq meters; Fire Service Station; and approximately 0.25km of access road from the Trunk road at the Airport and 1km service roads within the Airport area.

Last weekend, Uduaghan spoke to newsmen on his dream about the airport and how he took the various “insults” from some leaders of the state, who particularly accused him of looting the resources of the state with the airport. Excerpts:

How do you see the accusations against your government?

I tried to be focused. I tried to pursue my goal. Once I believe in something, I pursue it. People might talk. You try to explain when they talk but you must be focused at what you are going for because at the end of the day, people will see the product and at that time, you don’t need to argue. Like the airport now, I don’t need to do propaganda; it is there for everybody to see. (Bursts into a religious song of come and see oh, come and see… Long laughter, come and see what the airport is like, that is what is on ground)

People are using the airport now. Every day, flights are coming in. Flights are going out. People are coming. They are seeing. It is no longer oh, it is not airport or it is a small airport and all that. The Minister of Aviation, Mrs. Stella Oduah, came and saw. So, there is nobody who can go and tell her that there is no airport there because she had seen and she gone inside.

What’s your view on politics and propaganda?

Well, what I am saying is that sometimes politics is about propaganda and there had been so much propaganda about that airport. But like I kept saying, just wait until we get to where we are going because we have a vision for the state and we know we are going somewhere. So far, the airport is talking for itself. I read in the papers, I think it was Vanguard that the Minister said the airport is a model and that she would recommend it to other states. Some people did not know what we conceptualized and what was put on ground in the Asaba airport. They did not bother to find out. All they wanted was to criticize us, but you can see the Minister of Aviation, who visited, speaking on what she saw.

The truth about Delta is that there is so much blackmail, so much misinformation, so much mischief that anything can be used for mischief. Some of these people that said all the things about the Asaba airport project and other projects I initiated know that what they say is not right, like somebody saying that the projects were paid for by the preceding government, which they know is not true. But that is what they have been saying and the person who wants to believe what they are saying, they believe them. What is important is God and my conscience. Once I know I am right in whatever I am doing, I go ahead and do it and let the people see the result.

What has leadership taught you?

You see, I don’t want to compare myself with anybody. But if you look through history, even starting from the Bible, when the children of Israel were to be taken from where they were to the Promised Land, they never believed that there was a Promised Land so much so that on the way because of their unbelief, instead of spending 40 days, they spent 40 years to get to the Promised Land. And many of them died, some survived but at the end of the day, they got to the Promised Land.

The biggest example of all in this world that people never believed is Jesus Christ. Even with all his faithfulness, with his sincerity, people did not believe him. How many people believed Jesus Christ when he was alive? But when he was saying that there is life after death. He was crucified but that I am not comparing myself with Jesus Christ. However, in terms of leadership, I have come to know that people only begin to accept their leaders when they are gone. Take my predecessor for instance, when he was here, was this when they were abusing him? But when I now came, some are saying that one na him come better pass (laughs)?. So it is like that, leadership is like that, it is not surprising to me, I do the best I can and let posterity be the judge.