R75m worth of cocaine hidden in oranges, shipped to the UK from South Africa 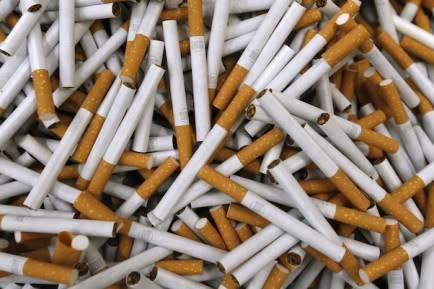 South Africa is no doubt dealing with a lot of problems at the same time, but one of the most disturbing issue facing the country is immigration problems. Our borders are very porous that people can literally walk in and out without interference from appropriate agencies.

Some of our border towns serve as gateway for smugglers who flood our market with illicit and adulterated branded products. This is becoming a huge source of concern for the government and the people of South Africa.

Few days ago, a video started circulating online which revealed the method used by smugglers to move illicit cigarettes into South Africa. The culprits were seen carrying cartons of cigarettes on their head and they were moving into the country on foot.

Reacting to the incident, a Namibian man known as Boogie Boss on Twitter have criticized South Africans for the continuous smuggling happening within their borders. He said that there is high demand for Zimbabwean cigarettes and that’s why these smugglers keep finding new ways to bring it into the country.

He urged citizens of SA to refrain from buying some of this products and they will see a decline in smuggling of illicit goods into the country from neighboring nations.

Actress Jessica Nkosi Talks About Her New Role On Lavish

World Cup 2022: Fixtures Schedule And Kick Off Times For Qatar