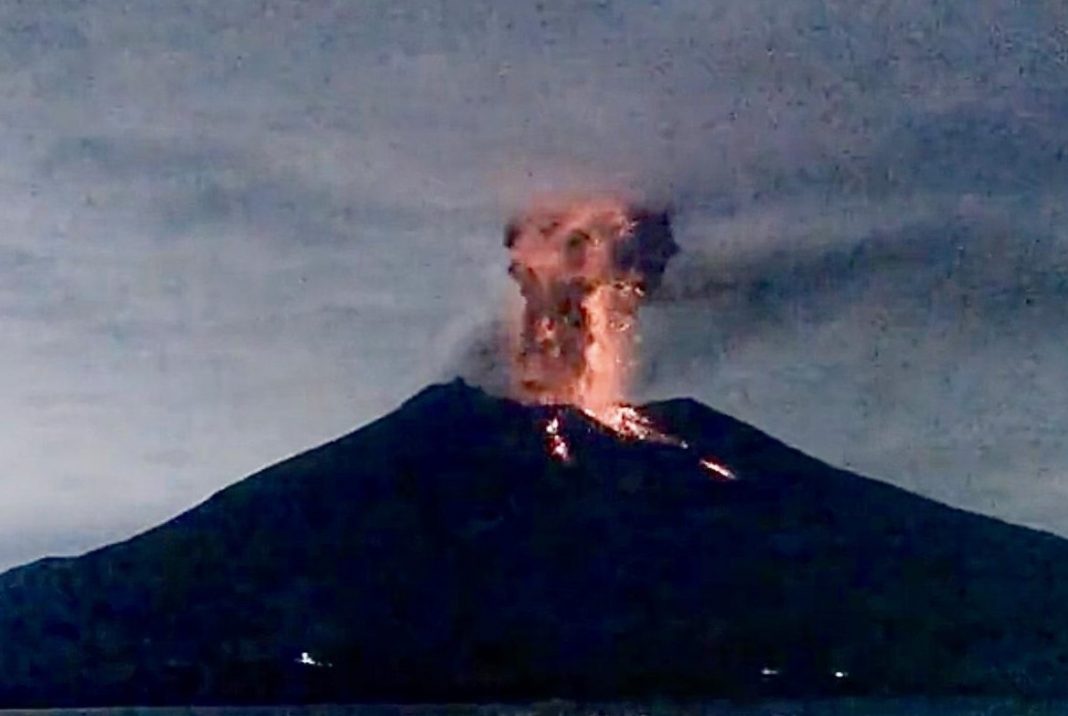 Currently, there are 47 volcanoes around the world that are in “continuing eruption status,” according to the Smithsonian Institution’s Global Volcanism Program. That is more than double the normal number of what are called “continuing” volcanic eruptions, which are intermittent eruptions without a break of more than three months.

Most of the continuously erupting volcanos are clustered around what is called the “Ring of Fire,” which circles the Pacific Ocean. According to the United States Geological Survey, most earthquakes and volcanic eruptions occur where the Pacific Plate meets many surrounding tectonic plates. The “Ring of Fire” is the most seismically and volcanically active zone in the world.

On Saturday, the Hawaiian Volcano Observatory, a division of the USGS, announced it had added webcams showing a livestream of lava erupting from Fissure 3 on the northeast rift zone of Mauna Loa.

“Lava diversion is a tricky thing to do, especially on flat ground,” said Hawaii County Civil Defense Administrator Talmadge Magnoe. “It really comes down to a volume problem. What we’re seeing now is — take 10 of the biggest dump trucks you can think of, we’re getting that many dump trucks of lava every second delivered by this lava flow.”

In addition to Mauna Loa and Kilauea, there are two other volcanoes currently erupting in the United States. Pavlof Volcano in Alaska has been venting gas and ash as high as 20,000 feet since last month and Alaska’s Volcano Observatory has also reported a slow lava effusion from Great Sitkin since the end of November.

Indonesia’s Mount Semeru erupted on Sunday spewing volcanic ash 5,000 feet into the air and forcing the evacuation of nearly 2,000 people.

“A total of 10,000 cloth masks, 10,000 medical masks and 4,000 children’s masks have been distributed to reduce the impact of respiratory health risks due to volcanic ash,” Indonesia’s National Disaster Management Agency said in a statement.

Mount Semeru is one of eight volcanoes currently erupting in Indonesia. The others include Mounts Kerinci, Krakatau, Merapi, Lewotolok, Karangetang, Ibu and Dukono.

Mount Semeru, which is located on the island of Java, is Indonesia’s highest volcano and last erupted a year ago, killing 51 people. There were no casualties in Sunday’s eruption. Geologists blame monsoon rains that eroded the volcano’s lava dome for causing the eruption.

In Italy, a volcano erupted on the small island of Stromboli in October. The volcano billowed ash into the air and sent streams of lava into the sea, with no major damage or casualties.

Italy’s National Institute of Geophysics and Volcanology recorded a lava flow leading from the northern crater of the volcano which oozed out to the Tyrrhenian Sea through a fissure in the earth’s crust known as the Sciara del Fuoco or “stream of fire.”

The Stromboli volcano erupted seven times in 2022. Mount Etna, another active volcano located on the Sicilian mainland, erupted in February and May of this year.

On Saturday, Sakurajima volcano on Kyushu in Japan erupted with a spectacular show of lightning, lava and ash that spewed 6,000 feet above sea level.

Strong explosions accompanied by volcanic lightning were registered at Sakurajima volcano, Japan at 10:30 UTC on December 3, 2022, suring a new eruption that sent volcanic ash at 1.8 km (6 000 feet) above sea level.

The eruption of Sakurajima is one of three ongoing eruptions in Japan that include Suwanosejima last month. Aira in south Japan has emitted 700 tons of sulfur dioxide each day since Nov. 21 when the volcano exploded, sending an ash plume more than a mile into the air.

Chile’s Villarrica volcano, which is the country’s most active volcano, erupted Sunday with two explosions and a plume of lava shooting out of the crater.

Chile’s Nevados de Chillan was also active in October after an earthquake in the area.

In Russia, the Sheveluch volcano on the Kamchatka Peninsula erupted on Nov. 20, with up to 10 explosions per hour. Sheveluch is one of Kamchatka’s largest and most active volcanoes with an estimated 60 large eruptions over the past 10,000 years.

Sheveluch is one of five volcanos currently erupting in Russia, that also include Alaid, Ebeko, Chikurachki and Bezymianny.

Other volcanoes currently erupting around the world can be found in the Philippines, Solomon Islands, Costa Rica, Nicaragua, Ecuador, Tanzania, Peru, Tonga, Australia, Mexico, Guatemala and Ecuador, according to the Smithsonian Institution’s Global Volcanism Program.