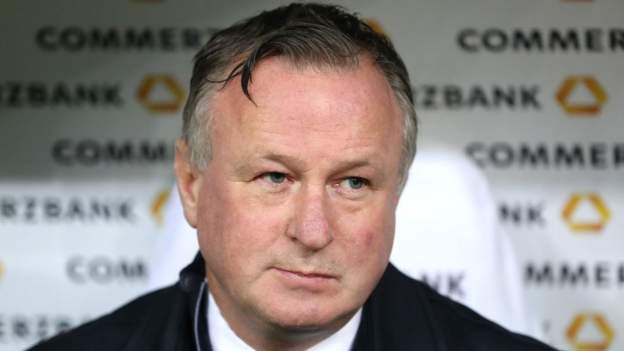 Michael O’Neill has agreed to return for a second spell as Northern Ireland manager after successfully concluding talks with the Irish FA.

The 53-year-old will take charge for the forthcoming Euro 2024 qualifying campaign, succeeding Ian Baraclough who was sacked from the post on 21 October.

O’Neill became Stoke City manager in November 2019 but stayed on as NI boss too until resigning in April 2020.

His appointment could be confirmed by the Irish FA as early as Wednesday.

O’Neill was sacked from his job at Championship side Stoke in August 2022.

The Potters had won one of their first five league games when he was relieved of his duties after almost three years at the helm.

Having been appointed NI boss at the end of 2011, O’Neill’s initial tenure saw him lead the team to the Euro 2016 finals in France, the first time in 30 years that the country had qualified for a major tournament.

At the finals themselves, he guided his side to the second round, beating Ukraine in the process, but ultimately losing narrowly to Wales at the last-16 stage.

Northern Ireland subsequently just missed out on a place at the World Cup finals in Russia when they controversially lost 1-0 to Switzerland in a play-off in November 2017.

Two months later, O’Neill turned down an offer to become manager of Scotland following discussions with the Scottish FA, instead agreeing a new contract to remain at the helm of his native country.

Following his appointment by Stoke, he initially remained as NI manager and intended to stay on for the Euro 2020 play-offs, which had been scheduled for March 2020 only to be postponed by the Covid-19 pandemic.

With the play-offs delayed at least until the autumn of 2020, O’Neill resigned as international team boss on 22 April, with Baraclough appointed as his successor two months later.

The Irish FA will hope that O’Neill’s appointment can revive the fortunes of the national team after a series of relatively disappointing results under Baraclough which yielded just four wins from 22 competitive matches.

Northern Ireland will face Denmark, Finland, Slovenia, Kazakhstan and San Marino in the forthcoming Euro qualifiers which begin in March next year.

Something of a surprise choice ahead of other more experienced managers when appointed for his first spell, Michael O’Neill has been the resounding favourite among Northern Ireland supporters to return as boss almost from the second Ian Baraclough was sacked.

They’ve got their early Christmas present and clearly don’t subscribe to the theory that, in football, you should never go back.

As he did when taking over from Nigel Worthington, the 53-year-old inherits a squad that has come through a tough spell under a manager who never won the hearts of the Windsor Park faithful.

What’s different this time, though, is that it doesn’t feel like the long-term project that it was 11 years ago when O’Neill was afforded time to recover and build after poor results amid a shaky start.

An instant return is almost certainly what the Irish FA will be looking for. A major factor in the association setting its stall out to re-hire O’Neill will have been the unexpected, yet hugely welcome, opportunity presented to Northern Ireland by a Euro 2024 qualification draw that offers genuine hope of reaching the finals for a second time in the country’s history.

O’Neill proved his credentials in leading the team on that joyous journey to France in the summer of 2016 and the IFA clearly feel he is best-placed to repeat that feat. It’s a challenge he will no doubt get to work on immediately, with methodical preparation and attention to detail being the hallmarks of his successful first reign.

And what of the players? There is still a core remaining in the squad who were regulars for O’Neill first time around, and it is likely he will have had conversations with some of them before agreeing his contract.

All eyes will now turn to March and the start of those Euro qualifiers. He couldn’t do it again, could he?