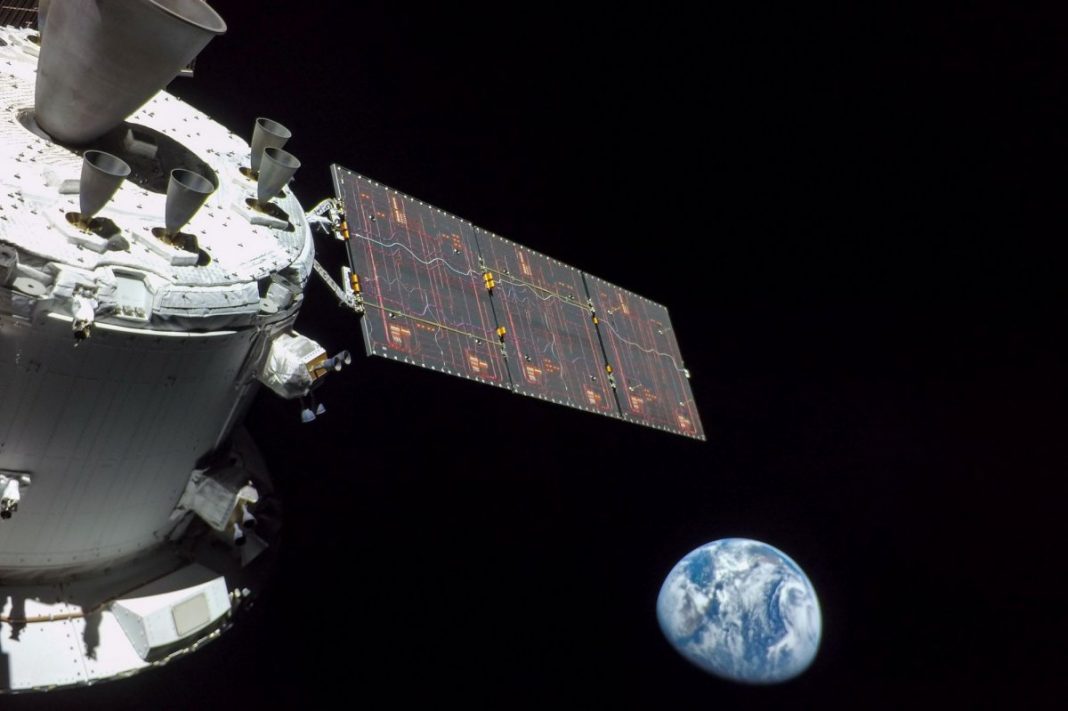 Nov. 30 (UPI) — NASA’s Orion space capsule, which is in day 15 of its Artemis 1 test flight, is scheduled to leave its current distant retrograde orbit on Thursday, as the spacecraft begins the process of returning home to Earth.

Artemis 1 mission management leaders provided a preview on Wednesday, from Johnson Space Center, of the upcoming maneuver that will ultimately send the test flight past the moon and back to Earth on Dec. 11.

“The distant retrograde departure, which is scheduled as part of a planned maneuver on Dec. 1, in the afternoon, and then followed by the return powered flyby scheduled for Dec. 5, in the morning,” Mike Sarafin, NASA Artemis 1 Mission Manager, said at Wednesday’s briefing. “That will begin the process of heading us back toward Earth.”

Orion reached its farthest distance on Monday, at 270,000 miles from Earth, successfully completing the first half of the mission that aims to ultimately return American astronauts to the moon. Orion’s distant retrograde departure burn is scheduled for Thursday at 3:55 p.m.

“That is a minute and 45 second burn and that basically takes us out of the distant retrograde orbit and brings us on a close trajectory to the moon. As we swing by the moon, we’re going to do a return powered flyby,” said Zebulon Scoville, NASA Flight Director.

During Wednesday’s press briefing, Artemis 1 team members applauded the success of the mission and announced they will add more objectives after meeting earlier in the day. On the return flight, the team said it will now test extended burns, thermal systems, navigation systems and other boundaries of the spacecraft that will ultimately carry humans.

“This has been an incredible mission to fly,” Scoville said. “The flight control team is enjoying themselves while they’re learning about the vehicle. We’re taking it out and really testing it to its limits and trying to understand how it performs.”

“Pushing the thrusters through longer duration burns. In fact, we just completed one several minutes ago that was our longest duration burn out of the RCS system,” Scoville added.

“This is a ship that’s going to take humans to explore the solar system,” Scoville said. “This vehicle needs to be thought of as a human craft that will take humanity to the moon on Artemis 2 and 3 and subsequent missions.”

“We are continuing to collect flight test data and buy down risk for crewed flight,” Sarafin added.

The Artemis I team is also looking ahead to the weather forecasts and the Navy’s recovery effort once Orion splashes down on Dec. 11.

“The weather forecasts this far out are not that reliable, but the actual observed conditions are consistent with the climatology data and that is actually giving us an early look at what the conditions may look like,” Sarafin said.

“The team that is performing the recovery operations is at sea right now and performing ‘just in time’ training with the Navy and they’ll return on Dec. 3,” Sarafin added.

As Orion begins its journey back to Earth, the team also previewed the spacecraft’s flyby of the moon. The team said upon close approach, it expects to lose its signal with Orion as it goes into darkness for about 40 minutes.

“The face of the moon that faces Earth, is what we will see lit up. So we’ll see familiar features like the man on the moon, perhaps, and more specifically the craters and lava beds we went and explored during the Apollo program,” Scoville said.

The Artemis 1 mission, which launched from Kennedy Space Center on Nov. 16, sets the stage for astronauts to return to the moon for the first time since 1972, which will happen sometime in 2025 or 2026 as part of the Artemis 3 mission.

Next year, astronauts will board the Artemis 2 capsule, which will circle the Earth and moon as part of the mission’s first manned test flight.

Artemis would ultimately pave the way for mankind to reach Mars.

“The service module has been built in Europe and the service module is providing critical function for Orion to fulfill its feat,” Philippe Deloo, Orion European Service Module Program Manager for the European Space Agency, said during the briefing, while noting that Europe is already building service modules through Artemis 6.

“And last week, our ministers have approved the funding to start the manufacture of the service modules for the Artemis 7 and 9 missions,” Deloo added. “So, we are really on board with NASA to make this exploration to the moon, to Mars and beyond a success.”