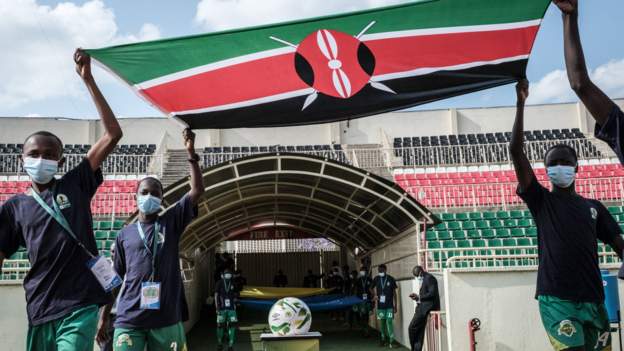 Kenya’s ban from global football has been lifted by world governing body Fifa.

The suspension was imposed in February after Kenya’s sports ministry disbanded the country’s football federation (FKF) over alleged misappropriation of funds and appointed a caretaker committee in November 2021.

The sanction meant the East Africans were barred from qualifiers for the 2023 Africa Cup of Nations.

However, Ababu Namwamba, the cabinet secretary for Youth Affairs, Sports and the Arts, has helped resolve the issues created when predecessor Amina Mohamed installed a 27-person caretaker committee to run the FKF 12 months ago.

FKF vice-president Doris Petra and general secretary Barry Otieno have been reinstated to their positions and control of FKF offices handed back to its board – as demanded by Fifa.

A letter to Otieno from Fifa secretary general Fatma Samoura said the ban had been discussed by the bureau of the Fifa Council last Friday and confirmed the suspension had been lifted.

A joint mission from Fifa and the Confederation of African Football (Caf) will visit Nairobi to “define the next steps” for the FKF and meet with Namwamba, with details to be arranged in due course.

Samoura’s letter added the suspension is lifted “without prejudice to the ongoing investigations and court proceedings at national level”.

FKF president Nick Mwendwa remains suspended from his post because of a long-running court case against him, regarding fraud charges which he denies.