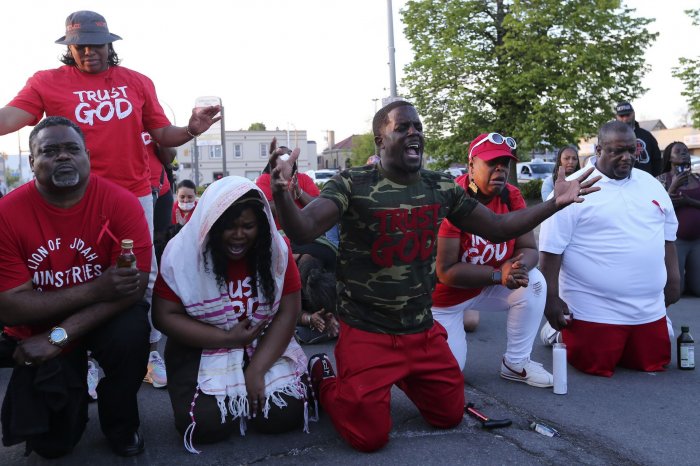 Nov. 28 (UPI) — Payton Gendron pleaded guilty on Monday to shooting to death 10 Black people at a Buffalo supermarket in May.

“Thank God the families and the victims who survived this and this community don’t have to endure a long, protracted trial,” Erie County District Attorney John Flynn said after the hearing.

“Nothing will ever bring back the 10 beautiful people who lost their lives on that day. This past Thursday on Thanksgiving, there were 10 empty chairs at the Thanksgiving dinner … I can never provide full closure. There’s never going to be full closure for the families.”

The attack, motivated by race, marked the first time a defendant in New York was found guilty of murder charges motivated by hate. He faces life in prison without the possibility of parole. He also faces federal hate crime charges for the shooting massacre at the Tops Friendly Market that was mostly frequented by African Americans.

A group prays in the street on Sunday near the site of the mass shooting on Saturday at a Tops supermarket in Buffalo, N.Y. Photo by Aaron Josefczyk/UPI | License Photo

Gendron live-streamed his shooting on May 14 while armed with a semi-automatic AR-15. Federal and local prosecutors said despite efforts to purge it from the Internet, copies still manage to pop up.

Flynn said Gendron illegally modified his weapon and wrote 180 pages of racist statements that also showed his admiration for other mass shooters.

Federally, Gendron faces 26 counts of committing a hate crime resulting in death and a hate crime involving bodily injury. The suspect is also charged with using a firearm to commit murder during a crime of violence.

Gendron’s public defender entered a not-guilty plea for him in July on those charges.