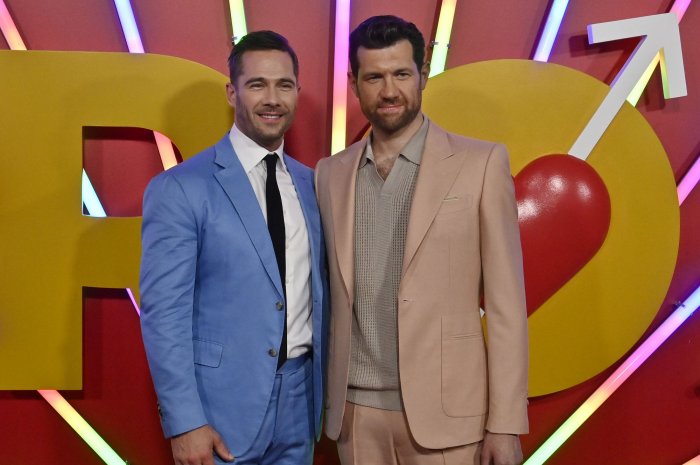 Nov. 28 (UPI) — Bros is coming to Peacock. The first LGBT+ rom-com ever to be released by a major studio is heading to the streamer after its theatrical release.

Co-written by Billy Eichner and Nicholas Stoller, and directed by Stoller, the movie centers around two gay men who may or may not be heading toward true love. Originally released in September, Bros featured a completely LGBT+ main cast including Luke Macfarlane (Killjoys), Ts Madison (The Ts Madison Experience), Monica Raymund (Chicago Fire), Guillermo Díaz (Scandal), Guy Branum (The Other Two) and Amanda Bearse (Married …with Children).

“We’ve had many romantic comedies over the years that I’ve loved about straight characters — men and women falling in love, falling out of love — and I love those movies,” Eichner said in an interview with the filmmakers via Zoom in September. “They made me laugh. They made me cry. I grew up with those movies, but we’ve never had one released on this scale about a gay couple and with this many LGBTQ+ characters and this many LGBTQ+ actors playing the roles, including the straight roles.”

The synopsis reads: “From the ferocious comic mind of Billy Eichner (Billy on the Street, 2019’s The Lion King, Difficult People, Impeachment: American Crime Story) and the hitmaking brilliance of filmmakers Nicholas Stoller (the Neighbors films, Forgetting Sarah Marshall) and Judd Apatow (The King of Staten Island, Trainwreck, The Big Sick), comes Bros, a smart, swoony and heartfelt comedy about how hard it is to find another tolerable human being to go through life with.”

Though the film was released to great fanfare due to its groundbreaking subject matter, it was a disappointment in theaters, earning just $4.8 million in its opening weekend. Eichner was vocal about his feeling that homophobia was behind the lack of box office for the movie.

“Last night, I snuck in and sat in the back of a sold-out theater playing BROS in LA,” he posted on Twitter. “The audience howled with laughter from start to finish, burst into applause at the end and some were in tears as they walked out. It was truly magical. Really. I am VERY proud of this movie.”

Last night I snuck in and sat in the back of a sold out theater playing BROS in LA. The audience howled with laughter start to finish, burst into applause at the end, and some were wiping away tears as they walked out. It was truly magical. Really. I am VERY proud of this movie.— billy eichner (@billyeichner) October 2, 2022

“That’s just the world we live in, unfortunately,” Eichner continued on Twitter. “Even with glowing reviews and great Rotten Tomatoes scores, an A CinemaScore, etc., straight people, especially in certain parts of the country, just didn’t show up for ‘Bros.’ And that’s disappointing but it is what it is.”