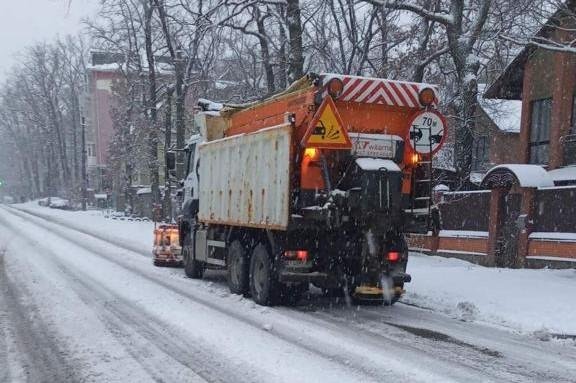 Nov. 27 (UPI) — Crews have nearly restored power, water and internet in Kyiv as workers plow streets in Ukraine’s capital after a freezing rain and snowstorm that has impacted Russia’s war in the country.

The city’s military administration said that crews are in the final stages of repairing the power grid and that the water supply, heat and communication “works normally,” CNN reported.

The Kyiv Regional Military Administration said in a statement that freezing rain and ice conditions on Wednesday and Thursday “led to massive, downed trees and downed power lines.”

In another statement, the Kyiv Regional Military Administration said that the cleaning and de-icing of roads in the region continued Sunday.

The Ukrainian Hydrometeorological Center warned Sunday that “dangerous meteorological phenomena” will be observed in the Kyiv region through Monday, as forecasters predict light sleet and rain as well as fog limiting visibility to about 656 feet with temperatures hovering just above freezing.

Crews are also working to restore infrastructure damaged by Russian forces near Kyiv earlier this year before Russian troops fled the region, the Kyiv Regional Military Administration said in another statement on Telegram.

“In Irpin, the residential infrastructure destroyed by the occupiers is being restored. Currently, more than 30 high-rise buildings are being repaired in the city. Among them are apartment buildings on Turgenivska Street,” the Kyiv Regional Military Administration said.

“Windows and doors are being replaced at the objects, and the roof is being repaired at one of them. Even in inclement weather and power outages, work continues. All of them will be completed within the specified time. We are rebuilding Kyiv region!”

Despite the inclement weather, Belgium’s Prime Minister Alexander de Croo visited Kyiv on Sunday and visited the site of a mass burial of people who were allegedly tortured by Russian forces before they were killed in Bucha, Ukrainian officials said in a statement.

The Institute for the Study of War, a think tank based in Washington, D.C., said in an analysis on Saturday that “overall pace of operations along the frontline has slowed” because of the deteriorating weather.

“Ukrainian and Russian reporting from critical frontline areas throughout eastern and southern Ukraine, including Svatove, Bakhmut, and Vuhledar, indicates that operations on both sides are currently bogged down by heavy rain and resulting heavy mud,” the Institute for the Study of War said in its analysis.

Temperatures are forecast to drop throughout Ukraine over the next week, which will likely freeze the ground and expedite the pace of fighting as mobility increases for both sides.”