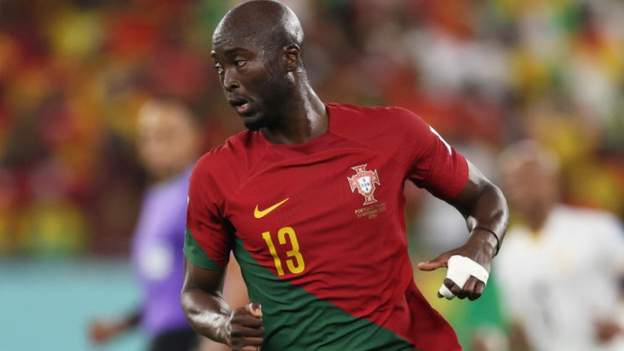 Portugal manager Fernando Santos said the team “do not understand how” midfielder Danilo Pereira fractured his ribs in training this week.

The Paris St-Germain star, 31, is expected to sit out the rest of the group stage at the Cup, including Monday’s match against Uruguay.

Pereira was in the starting line-up for the 3-2 win against Ghana on Thursday.

“It is a type of injury that no one can explain. We don’t understand how that could have happened,” said Santos.

“It’s normal these injuries happen but we didn’t see how it happened exactly. Initially we did not think it was a very serious one.

“We had a few exams to see if he was breathing properly and apparently that was the case, but afterwards we saw it was more serious. We are following it up.

“I am not a doctor so can’t talk about it in detail but as far as I know he is evolving positively. We are expecting to have him [back] soon but if not we have three other midfielders who can replace him.

“We do not need to have any drama or cry over it. We are very sad for him. We have to think of him as a human being beyond being a player.

“He is someone with very positive energy and I’m sure he will be sending good vibes our way.”

Portugal have no other fresh injury concerns besides Pereira.

Uruguay centre-back Ronald Araujo, who underwent thigh surgery at the end of September, is still not expected to feature on Monday.