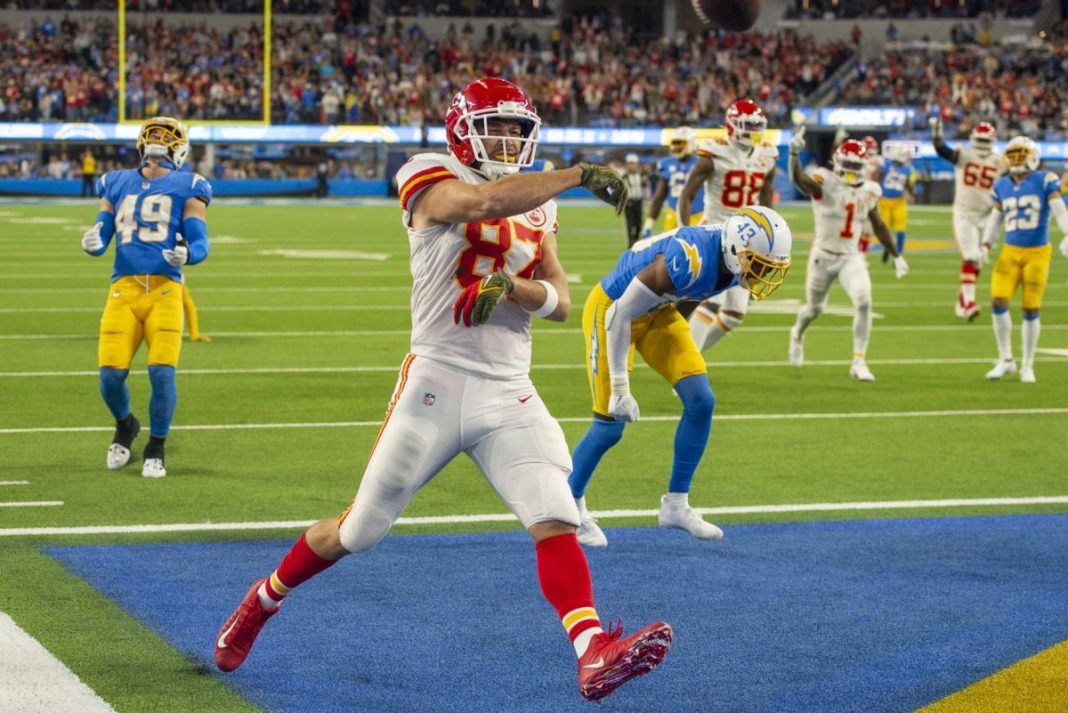 Nov. 21 (UPI) — Travis Kelce’s third touchdown catch of the day also proved to be the game-winner, with the All-Pro hauling in a 17-yard pass with 37 seconds remaining to lead the Kansas City Chiefs past the Los Angeles Chargers.

Kelce totaled six catches for 115 yards in the 30-27 win Sunday at SoFi Stadium in Inglewood, Calif. Mahomes completed 20 of 34 passes for 329 yards and three scores.

“We’re a part of it, and that’s the fun part,” Chiefs coach Andy Reid told reporters, when asked about Mahomes and Kelce.

“You’d like it to last forever, but these guys grow old and it’s not. So, what I do is I try to enjoy every minute of it, every play. Their chemistry is ridiculous. You know, coming into this game, that they had a plan for Kelce and he and Pat were able to work through it and make some nice things happen.”

The Chiefs out-gained the Chargers 485 to 365 in total yardage. They also totaled five sacks and forced two turnovers. Chargers quarterback Justin Herbert completed 23 of 30 passes for 280 yards, two scores and an interception.

“We do this a lot,” Mahomes said. “Coach Reid prepares us for these moments. We knew we had a lot of time on the clock. We knew we had some time outs, so we didn’t rush. We just kind of went through what we do every single day at practice and everything like that, and we executed.

“Travis is Travis. He is the greatest tight end of all time. He makes plays like that that win games.”

The Chiefs scored points on each of their first three possessions and led 13:10 at the start of the second quarter. Chargers running back Austin Ekeler ran for a 1-yard score about 3:30 before halftime. Kicker Cameron Dicker added a 21-yard field goal on the Chargers next drive for a 20-13 lead at the break.

The Chargers punted to start the second half. The Chiefs answered with a 9-play, 56-yard drive. Kicker Harrison Butker made a 30-yard field goal to end that possession, which cut the deficit to four points.

The Chargers punted again on their next drive. That led to a 10-play, 86-yard touchdown drive for the Chiefs. Mahomes threw a 32-yard touchdown pass to Kelce to end that drive. Butker followed with an extra point to give the Chiefs a 23-20 edge.

The Chargers regained the lead with a 10-play, 64-yard touchdown drive. Hebert threw a 6-yard touchdown pass to Joshua Palmer to end that possession. The score and extra point gave the Chargers a three-point edge but left nearly two minutes of the clock for Mahomes and the Chiefs.

Mahomes started the final drive with an 18-yard pass to Marquez Valdes-Scantling. He then ran for six yards, threw a 13-yard pass to Skyy Moore and scrambled for another 13 yards to get the Chiefs to the Chargers’ 17-yard line.

Mahomes then took the next snap with about 37 seconds remaining. He caught the snap just as Kelce shook off safety Derwin James at the line of scrimmage. Kelce then flashed over the middle and caught a pass between the hash marks. He then stuck his foot in the ground and raced into the end zone for the go-ahead score.

Chiefs linebacker Nick Bolton intercepted Herbert on the Chargers’ first play of the resulting drive to seal the victory. Bolton also logged a game-high 14 combined tackles and a forced fumble in the victory.

Chiefs running back Isaiah Pacheco ran for 107 yards on 15 carries. Chargers running back Austin Ekeler totaled 100 yards and a score on 21 touches. Palmer caught eight passes for 106 yards and two scores in the loss.

“You should be frustrated,” Chargers coach Brandon Staley said. “We just lost to a good team at home. We had the lead. We weren’t able to close it out.

“That’s an outstanding team that we played. To not beat those guys is disappointing because we felt like our level was good enough to win, but we didn’t finish plays in that fourth quarter to get it done. That group in there has a lot of pride. We have played two really tough ones in a row against two fantastic teams. Now, we have to get our rest and we have to move on. We have to go to Thanksgiving and we have to get ready for the Cardinals.”