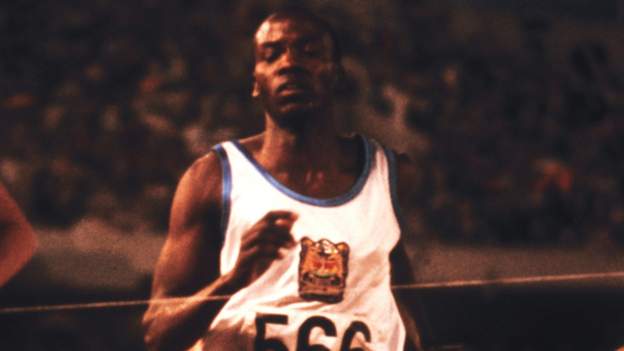 Wilson Kiprugut, Kenya’s first Olympic medallist, has been hailed as a pioneer following his death at the age of 84.

Kiprugut won a bronze medal in the 800m at the 1964 Olympics in Tokyo and followed that up with a silver over the same distance in Mexico City four years later.

“It is a sad day for our sport. He was one of our greatest runners,” double Olympic and world 800m champion David Rudisha told BBC Sport Africa.

“Being the first Kenyan to win a medal in Olympic Games, and the race being 800m, is really a great inspiration.

“You can see the 800m has been a race for the Kenyans ever since. We have been performing very well, but I can say it’s because of people like Wilson Kiprugut.

“He made our country proud.”

Athletics Kenya said Kiprugut, who died in Kericho county on Wednesday after a long illness, was one of the country’s “pioneering athletes”.

“We will surely miss the presence of a truly loveable and kind person who selflessly made the country proud on the global stage,” a statement from Athletics Kenya added.

A trailblazer and icon

Kenya has won six of the past nine Olympic gold medals on offer in the men’s 800m, starting when Paul Ereng triumphed at the 1988 Games in Seoul.

An athlete from the East African country has been on the top step of the podium at every Olympics since 2008.

“Especially for those who want to run fast, breaking world record or attempting to break the world record. You have to get the calculations right.

“We feel very inspired by Wilson Kiprugut. He was one of Kenya’s special athletes.”

As well as his success at the Olympics, Kiprugut won two gold medals, in the 400m and 800m, at the first All-African Games held in Congo-Brazzaville in 1965.

The following year he picked up silver in the 880 yards race at the Commonwealth Games in Kingston, Jamaica.

The president of Kenya’s National Olympic Committee hailed Kiprugut as a “trailblazer”.

“He opened the way for our athletes and country to establish the rich tradition and status within the Olympic movement of Kenya’s athletic and sporting prowess,” Paul Tergat said.

“As we celebrate this icon, we note with pride that his legacy is immortalized as our athletes continue the winning tradition he established.

“We join the family and the rest of the sporting fraternity in mourning this great athlete.”