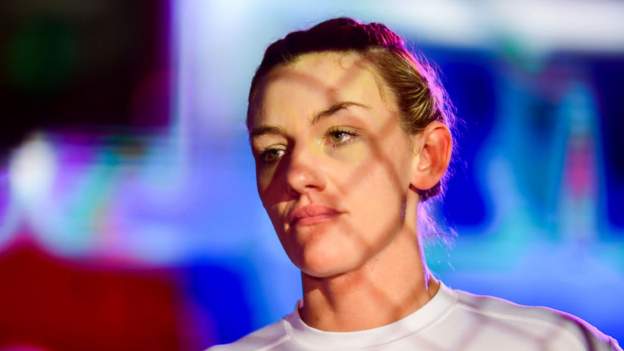 Leah McCourt’s bout against Sinead Kavanagh in Dublin in February was billed as the ‘biggest Irish fight of all time’.

It pitted two friends against each other in Belfast’s McCourt and Dublin’s Kavanagh, in front of a vociferous Irish crowd.

The event was a remarkable occasion, but for McCourt the pressure proved to be too intense as she was outpointed over a gruelling three rounds.

Following the defeat, which came just 16 days after she tested positive for Covid-19, she collapsed.

“I was sick for days, I couldn’t breathe for long stretches. I pushed my body to the extreme limits. I left everything I had in there,” McCourt, 30, tells BBC Sport.

“As much as I was excited for the fight, I definitely feel like there was a lot of expectation going into it.

“I don’t want to take anything away from Sinead because that was her night but I wasn’t 100% myself physically and it definitely took its toll.”

McCourt will face Brazil’s Dayana Silva in a featherweight bout at Bellator Dublin on Friday in her first fight since that loss to Kavanagh.

Unlike previously where she would train in Ireland, McCourt has opted to prepare for this bout at Next Gen gym in Liverpool alongside the UFC’s Molly McCann and coach Paul Rimmer.

McCann will be in McCourt’s corner on Friday night. McCourt says Rimmer has been a big influence and taught her to enjoy fighting and all the associated challenges.

“I sometimes feel like I’ve got the weight of the world on my shoulders, juggling fighting, promotion, Isabella [her daughter], my businesses, travelling, training – I do it all on my own,” she says.

“He [Rimmer] said I needed to enjoy it, enjoy training, enjoy sparring, otherwise what’s the point of doing it?

“Instead of worrying so much about the outcome, enjoy the process. I think it’s helped me perform a lot better in this camp.

“This fight I feel I am actually looking forward to going in there and fighting and I’ve never really had that feeling before.

“I’ve always just wanted to get it over and done with. I want the weigh-in done so I can get to fight and get it done. I’d always train to try and get a first-round finish. But, [this time], I want to be in there to the end if I have to.”

‘The energy in Liverpool is amazing’

McCourt’s loss to Kavanagh was only her second in eight professional bouts and followed a six-fight winning streak.

In 2020 she became the first woman to headline a major MMA event in Europe when she beat Judith Ruis at Bellator 240 in Dublin.

McCourt had planned to train in Liverpool before her loss to Kavanagh, but the Covid-19 pandemic made it logistically impossible.

Now coming off the back of a loss, she says the way McCann has rebuilt her career in the UFC, to go on a three-fight winning streak following successive defeats, has inspired her.

“Molly’s had her losses and look at her now, she’s come back and learned so much from those,” says McCourt.

“I’m logical. I understand your career isn’t going to be just an upward spike and you’ll have set-backs. You have to try and take what you can from that and build on your performance and training and add to everything.

“[The camp] was amazing. The energy in Liverpool, it’s just salt of the earth people. It’s quite similar to Belfast. My dad’s from Liverpool, my nan lives here so I stay with her or most of my camp with Molly.

“We’re best friends. We both crawl out of bed in the morning, sore and crying, but still dragging each other into training.”

‘Silva is a good test for me’

McCourt’s opponent Silva comes into the bout having beaten Janay Harding in April.

The 32-year-old has won 10 fights and suffered seven defeats during her 13 years as a professional and McCourt is weary of the threat she poses inside the cage.

“I think she’s an extremely tough opponent. This is a tough fight,” she adds.

“She is aggressive and she just beat Janay Harding. [She lost to Julia Budd but] I don’t think she lost that fight. She’s definitely a good test for me.”

McCourt’s says beating Silva could set up a mouth-watering rematch with Kavangah.

“I’d love to win this fight and fight her [Kavanagh] again in February,” she says.

“Me and her put on such a good thing, such a good performance. We deserve a main event slot, in Belfast maybe this time.

“It’s not about getting the win back, it’s just because it was such a good fight, why wouldn’t we do it again? But we’ll see.”

First, though, a Friday night in Dublin.