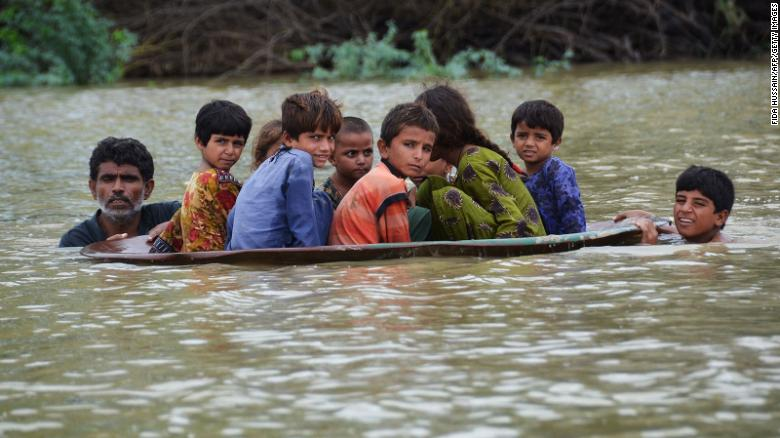 Striking new satellite images that reveal the extent of Pakistan’s record flooding show how an overflowing Indus River has turned part of Sindh Province into a 100 kilometre-wide inland lake.

Swaths of the country are now underwater, after what United Nation officials have described as a “monsoon on steroids” brought the heaviest rainfall in living memory and flooding that has killed 1,162 people, injured 3,554 and affected 33 million since mid-June.

The new images, taken on August 28 from NASA’s MODIS satellite sensor, show how a combination of heavy rain and an overflowing Indus River have inundated much of Sindh province in the South.

In the centre of the picture, a large area of dark blue shows the Indus overflowing and flooding an area around 100 kilometres (62 miles) wide, turning what were once agricultural fields into a giant inland lake.

It’s a shocking transformation from the photo taken by the same satellite on the same date last year, which shows the river and its tributaries contained in what appear by comparison to be small, narrow bands, highlighting the extent of the damage in one of the country’s hardest-hit areas.

This year’s monsoon is already the country’s wettest since records began in 1961, according to the Pakistan Meteorological Department, and the season still has one month to go.

In both Sindh and Balochistan provinces, rainfall has been 500% above average, engulfing entire villages and farmland, razing buildings and wiping out crops.

While mostly dry weather is expected in the region in coming days, experts say the water will take days to recede.

Pakistan’s climate change minister Sherry Rehman said Sunday that parts of the country “resemble a small ocean,” and that “by the time this is over, we could well have one-quarter or one-third of Pakistan under water.”

In a interview with CNN Tuesday, Pakistan’s Foreign Minister Bilawal Bhutto Zardari said he had visited Sindh and seen first-hand how the flooding had displaced entire villages and towns.

“There is barely any dry land that we can find. The scale of this tragedy … 33 million people, that’s more than the population of Sri Lanka or Australia,” he said.

“And while we understand that the new reality of climate change means more extreme weather, or monsoons, more extreme heat waves like we saw earlier this year, the scale of the current flood is of apocalyptic proportions. We certainly hope it’s not a new climate reality.”

Satellite images from Maxar Technologies from other areas of the country show how entire villages and hundreds of plots of verdant land have been razed by the rapidly moving floods.

Images from Gudpur, a locality in Punjab, show how the floods have damaged homes, and replaced land with snaking trails of of bare Earth.

The province has logged most of the latest deaths after water levels rose exponentially, said the country’s National Disaster Management Authority.

Sharif said Tuesday the flooding was the “worst in Pakistan’s history” and international assistance was needed to deal with the scale of the devastation.