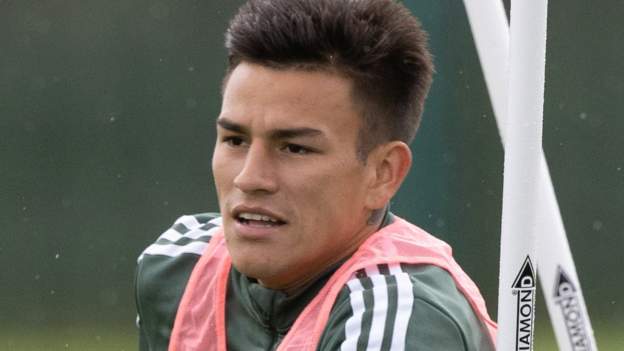 Ange Postecoglou has confirmed Celtic left-back Alexandro Bernabei is available for a debut against Hearts on Sunday after being charged over an alleged road traffic offence.

Bernabei has yet to play since joining for a reported £3.75m from Lanus.

“He is training and available,” said manager Postecoglou.

“There was an incident earlier in the week and now there are processes taking place both externally and internally. When they come to a conclusion, we will take the appropriate measures.”

Celtic have been strongly linked with a move for Montenegro winger Sead Haksabanovic, who is seeking to leave Russian club Rubin Kazan, but Postecoglou was giving nothing away.

“We have been linked with a player every time I have done one of these,” he said. “When and if we announce it, we will announce it.”

The Celtic boss is keen to sanction a loan for winger Mikey Johnston, who has been restricted by injury to just three appearances in 2022, while other fringe players such as James McCarthy, Albian Ajeti and Christopher Jullien could also move on.

“Without talking about specific players, it’s about trying to find opportunities for these guys to play if they are not going to get opportunities here,” Postecoglou said.

“It’s got to be driven by themselves as well, if they want to find somewhere to get more opportunities, we will certainly help in that regard.

“Mikey I’m really keen to get some game-time. He’s an outstanding talent and just hasn’t been able to get a good run of games.

“A different environment for him, I think he can start realising the potential we know he has.”