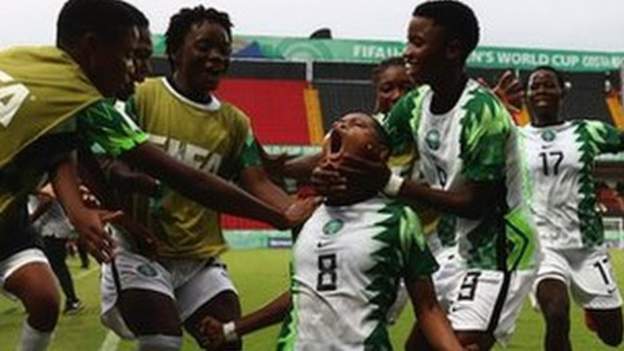 Nigeria came from behind and beat Canada 3-1 to finish the group stage of the Under-20 Women’s World Cup in Costa Rica with three wins from three.

Already-eliminated Canada led through Kaila Novak in the second minute following a goalkeeping blunder, before Onyenezide equalised from the spot in the 22nd minute after Mia Pante handled the ball in the box.

Nigeria won another penalty seven minutes later and it came as Mercy Idoko was fouled by Simi Awujo inside the box, a decision given after the referee consulted the pitch side monitor.

Onyenezide converted again to make it 2-1 and substitute Chioma Olise then added a third goal late on to confirm a resounding victory in Alajuela.

The Falconets, who lost in the tournament’s final in 2010 and 2014 to Germany, will face the Netherlands in Sunday’s quarter-final after the latter beat Africa’s other representative, Ghana, 4-1 in San José.

Ghana had already suffered defeats to United States and holders Japan, which meant they could not qualify for the quarter-finals. The Black Princesses were once again punished for goalkeeping and defensive blunders in this year’s tournament.

Goalkeeper Cynthia Konlan Findib failed to handle a cross, which allowed Liz Rijsbergen to put the Dutch ahead before the half-hour mark. Ziva Henry made it 2-0 six minutes after the restart, tapping in after more uncertainty from Konlan Findib.

Doris Boaduwaa grabbed Ghana’s first goal of the tournament with a lovely finish in the 53rd minute, but Rijsbergen blasted in her second in the 65th minute before Marit Auée sealed the 4-1 win for the Europeans.

Ghana have now failed to go past the group stage of the global tournament in six appearances.