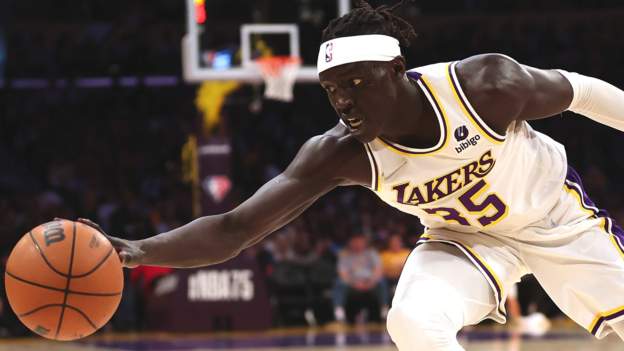 Los Angeles Lakers power forward Wenyen Gabriel wants to use basketball to unite people in his native South Sudan after its bitter experience of conflict.

The 25-year-old is keen to tap into the country’s potential, as he believes it has the “tallest and most resilient people” in Africa.

Gabriel organised a basketball camp in the capital Juba, an initiative he funded himself, on a recent visit to the country.

“I pray that we continue to have peace in South Sudan and I want to use basketball to help unite us,” Gabriel, a dual American-South Sudanese national, told BBC Sport Africa.

“When you share a basketball court, you look at the person next to you and that is your brother. It’s important for that to trickle on to your regular life.

“Coming home here was important. I want to help in rebuilding this country, because nobody is going to build the county except for us, the youth, and people like myself who have learned different skills abroad.”

After gaining independence from Sudan in 2011, South Sudan saw five years of conflict which was ended by a peace agreement signed in September 2018.

However, insecurity remains rife in different parts of the country.

“The country has also been dealing with climate change – with floods which have affected 33% of the country,” Gabriel said.

“There are also land disputes and different conflicts, and different ethnic battles. It’s sad to see my people fighting each other. But I think sport has the power to change the world.

“Sports bring a lot of positive energy and we need to shift our mind-set away from the negative to a more positive one.”

Gabriel paid for flights and accommodation for his travelling party as well as the facilities and kit used by local players at his camp in Juba late last month.

“Hopefully in the future I can get some more support from outside. But this was an initiative that I felt really strongly connected to, and that I needed to get rolling,” added Gabriel.

There are numerous challenges regarding sporting facilities in South Sudan, although Gabriel has held discussions with local government officials in his home town of Rumbek, the capital of the country’s Lakes State.

“We need to start first of all with an outdoor court [in Rumbek] we need to renovate, because a lot of these facilities have really run down,” he said.

“After that, in the whole country there is not even one indoor basketball facility. We need to start making a recreational centre and eventually, one day, to start a stadium. Those things will bring us together.”

Gabriel says some land in Rumbek has been granted to develop, and he is aiming to work with the president of the country’s national basketball federation to boost the sport.

“We have to connect the 10 different states, starting with home-grown training, to advance Rumbek and all of South Sudan, which has vast potential,” he said.

Reconnecting with roots in Rumbek

Gabriel’s parents are both from Rumbek, but he was born in Khartoum, Sudan, in 1997.

An older sister, born a year earlier, died in infancy and Gabriel was given the name Wenyen, which means ‘wipe your tears’ in his native Dinka language.

Five months after he was born, Gabriel’s mother Rebecca Gak moved with him and his three siblings to Egypt to escape the violence of the second Sudanese civil war.

Two years after moving to Egypt, the United Nations granted an appeal to move the refugee family to Manchester, New Hampshire, an American city with a large South Sudanese population.

“This trip was very important to me because we have a very big family and I needed to re-connect with my roots. I am a child of this soil and I came with my mother,” Gabriel said.

“I feel a very close connection knowing that I have many more family members in South Sudan than I do in America. I needed to return home.

“Other refugees like myself feel this longing to return home, sometimes feeling a little excluded from society.

“But the fact that America accepted us and helped me get to where I am now and gave me different blessings, I am really very grateful.”

Gabriel has played for several sides in the National Basketball Association including the Sacramento Kings, Portland Trail Blazers and New Orleans Pelicans.

A move to 17-time NBA champions LA Lakers in March has seen him rub shoulders with one of the sport’s all-time greats LeBron James, and Gabriel thinks he is able to raise the profile of the world’s youngest nation.

“I am blessed for that and the different attention that came to me, and I am happy to shine that light on South Sudan,” he said.

“I have learned a lot from LeBron. It was amazing to be able to witness him, how he cares for himself and the type of person he is as well.

“To see him in a game and how he performs consistently is something that inspires me to work even harder and makes me want to get to the next level. It’s motivating.”

The influence of James – an 18-time NBA All-Star and four-time NBA Finals MVP in Lakers championship wins – has stretched all the way to Gabriel’s home town of Rumbek.

“Everywhere I went, everyone has LeBron jerseys on,” he said.

“I wish he could have seen that. Even in Juba there are many young people who are wearing LeBron jerseys.”

South Sudan are in the hunt to qualify for the 2023 Basketball World Cup, but Gabriel says it is “not the right time” to join the national team as he concentrates on performing for the Lakers.

“I have considered playing for South Sudan,” he said.

“If anything I think my services to the country would be more important over in LA right now, where I can hopefully continue to get my next contract and then bring those blessings back [to South Sudan].

“I can help support the community here, and continue to build (basketball) at the grassroots level. I think this is important.”