Veteran actor Raghubir Yadav’s first salary was not more than Rs 250. This was including his NSD scholarship and the tiny roles he got to do for then producers Saba Zaidi and Ved Sinha, who made shows for Doordarshan that had a satellite telecast.

“They gave us work in some project or the other. I had some connection with music, so I sang songs. Others including Raj Babbar, Sudhir Kulkarni, Ajit Vachani, Ranjeet Kapoor and Anil Chaudhary played some instruments. We were jointly paid Rs 150 for that. None of us had a bank account. So we encashed it at a shop in Connaught Place. All of us got a share of roughly Rs 30 each,” Yadav recalls.

The 65-year-old actor’s portrayal of Brij Bhushan Dubey aka Pradhan-Pati in the hit web series Panchayat got him a new fanbase among the current audience.

Raghubir Yadav is an ardent theatre performer and continues to remain associated with the stage. Infact, he says it was his proximity with plays that became instrumental in helping him bag his first film project, Massey Sahib, way back in 1985.

Here’s what he shared about turning from theatre to films, and if he faced any difficulty.

How did you bag Massey Sahib?

Before passing out from NSD, I was sent to FTII for three months for TV training etc. There, I acted in some student diploma films. I did few scenes for films by Pankaj Parashar and Saeed Mirza. So I got a hang of facing the camera. After NSD, most people came to Mumbai to take up films. But I liked theatre, so I didn’t unless some extraordinary role comes my way. Though Saeed Mirza kept calling me, I took up the repertoire of NSD for seven years. When I saw films by Shyam Benegal and Ketan Mehta, I felt encouraged. That’s when Massey Sahib came up. Director Pradip Krishen asked Barry John to help in its casting. I had worked in Barry John’s plays, so recommended me. Then Pradip met me after watching my plays and cast me.

I had the camera confidence. The only difference was, earlier I enacted in small projects, and Messey Sahib was on film camera. I wrote its dialogues with Pradip Krishen. This film took five years in the making. It was an NFDC film. 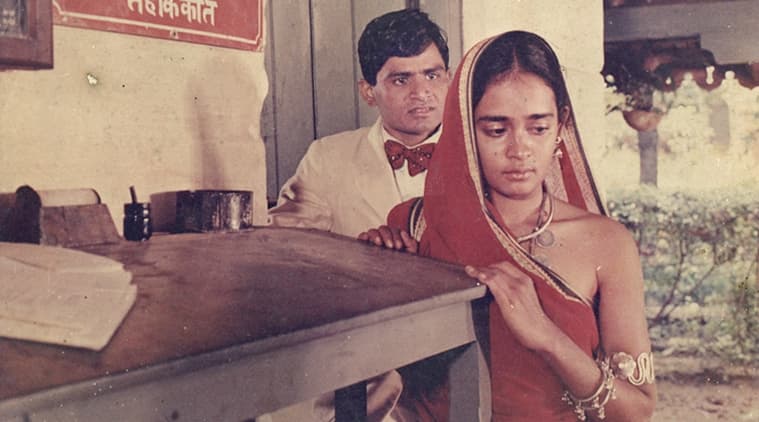 Raghubir Yadav and Arundhati Roy in a still from Massey Sahib.

What do you remember of the first day of shoot?

The film also starred Arundhati Roy, Virendra Saxena and others. The first scene I shot for was when my character is thrown out of the house because he loses his job. I had to leave with my stuff. That was my first scene. The film was set around 1929. My character belonged to the British era, those who hails from a tribal region and work for the British. He knew a bit of English which he kept flaunting. He marries a tribal girl.

It was shot in Pachmarhi in MP. It seemed as if that place was made for that film. We started shooting in 1981, and took 4-5 years to complete it. I was in NSD repertoire then. I took leaves and shot for it. One year we shot, next year we did patch work, then dubbing, editing. It finally released in 1986.

I wasn’t nervous at all, thanks to my experience with theatre audience. Though whenever I got loud, Pradip corrected me. That’s the only issue I faced, that too for 10-15 days. Then I was into the flow.

In theatre, the audience sits a little far away from you and the stage so you can manage with a little bluffing. But you can’t lie in films. A film camera has a sharp eye and can catch even your slightest mistake. Pradip taught me that and I learned that when you’re in a character, you cannot act, you have to live that character. You need to remain immersed in your character. Theatre actors are very impatient.

How’s your rapport with the cast and crew members today?

We are still friends. We’ll have the same rapport if we work even today.

If you get to redo your character today, is there anything you’d like to change?

I wouldn’t redo it, because an intention to improve is a mistake; I might end up making another mistake. I won’t say it was the perfect portrayal because it was my first film. I’m never satisfied with any performance. But I won’t attempt redoing it.

Which film or character inspired you during your growing up years?

We used to watch Dara Singh’s films, though there wasn’t much acting there and I never aimed at doing what he did because I was always associated with music. Later I saw Do Bheega Zameen and Kabuliwala. They left such an imprint that I became a fan of Balraj Sahni. Before that, I considered cinema as a means for commercial entertainment. These films taught me about characters. Then my brush with Parsi theatre happened. All of this motivated me to become an actor. This is the only profession where you need to learn everything, from sweeping the floor to making a tie knot. I belong to a rural background where we ploughed the field. So I only knew of folk songs and music. Parsi theatre gave me exposure to all kinds of music, including classical. That’s when I realised you cannot have a better life than this profession. You get to live so many lives in a single birth if you’re an actor.