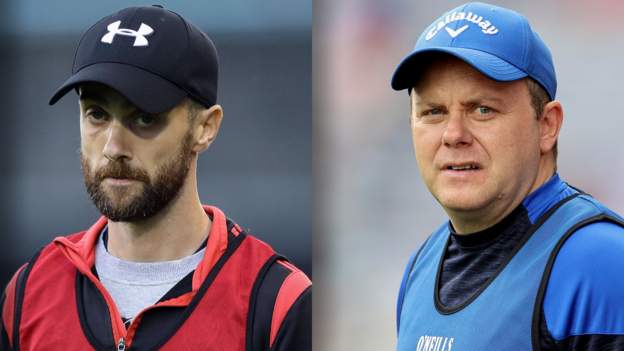 Conor Laverty has been appointed as the new Down senior football manager.

The Kilcoo forward replaces James McCartan, who stepped down in July after returning for a second spell in charge last year.

Laverty’s management team will include former Down All-Star Martin Clarke and Declan Morgan.

Elsewhere, Cavan GAA have confirmed that Ulster-winning manager Mickey Graham will remain in the role for another two years.

Graham, who was appointed ahead of the 2019 season, led the Breffnimen to a shock provincial title in 2020 and also guided the county of Division Four this year.

Under the Cavan Gaels clubman, Cavan reached the inaugural Tailteann Cup final in July, which they lost to Westmeath.

Meanwhile, Fermanagh have confirmed that Kieran Donnelly will remain in charge for the 2023 season.

Former Cavan Gaels and Scotstown boss Donnelly, who succeeded Ryan McMenamin in September 2021, helped retain the Erne County’s Division Three status for 2023 in his first year at the helm.

Laverty to continue as Down U20 boss

A Down GAA statement said that Laverty will also continue in his role as Down Under-20 manager. Laverty led the U20s to the Ulster title in 2021.

Down GAA chairman John Devaney “congratulated Conor and his management team on their appointment” and urged people in the county to give the Laverty “their full support”.

Laverty won a long-cherished All-Ireland Club Football title with Kilcoo last February and his playing career for the county included helping the Mournemen reach the 2010 All-Ireland Final and being nominated for an All-Star two years later.

At club level, he has won 10 Down senior football medals in addition to being joint captain when Kilcoo won the 2019 Ulster title and last season’s provincial and All-Ireland titles.

The highly-regarded coach, who captained his county in 2015, was linked with the Down job last year before opting against accepting the role.

This followed the departure of Paddy Tally and there were suggestions former Donegal manager Jim McGuinness would be part of Laverty’s backroom team.

However, Laverty opted against taking the role at that stage as McCartan, who guided Down to the 2010 All-Ireland Final, was later coaxed into accepting the job for a second time.

During an appearance on BBC Northern Ireland’s The GAA Social podcast in February, Laverty said that “it was not the right time for me to manage the Down seniors on my own”.

Laverty works as a GAA development officer with Trinity College in Dublin and was part of the backroom team of then Monaghan manager Seamus McEnaney in 2020.

The Kilcoo man will be tasked with transforming the Mournemen’s fortunes following a dismal 2022 in which the county failed to win a game.

They were relegated from Division Two of the Football League before losing their Ulster SFC opener to Monaghan.

That was followed by a first-round Tailteann Cup defeat by Cavan.