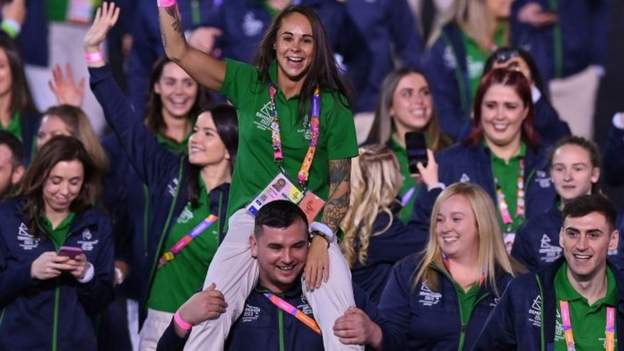 The clues that it was going to be a record-breaking Commonwealth Games for Northern Ireland came early.

The beauty and the curse of the multi-sport event is that you have different sports happening in different venues at the same time.

A glorious melting pot of sport and its unrivalled ability to bring people and cultures together? Yes.

A logistical impossibility for a reporter tasked with covering one nation’s exploits? Also yes.

On day one, this reporter was just getting himself in position at Arena Birmingham to watch Rhys McClenaghan, Ewan McAteer and Eamon Montgomery go in the artistic gymnastics when Daniel Wiffen set a new national record and qualified fastest for the 400m freestyle final at Sandwell Aquatics Centre.

Come on now, Daniel, read the itinerary. You weren’t meant to be the story until the evening.

At this point I should extend my thanks to the gymnasts, who ensured the morning’s narrative would not centre solely around the swimming pool by making it the first time that Northern Ireland would have three gymnasts in apparatus finals.

The very first morning and an important lesson learned: it’s going to be unpredictable, better to just lean into it.

And so it went from there, the records never stopped tumbling.

When the Games schedule was released, Barry McClements and Wiffen couldn’t help but notice that their first medal opportunities both came on the very first night.

Cue generic team-mate ribbing in the build-up to that Friday. Who was going to win NI’s first Commonwealth swimming medal in the pool?

In the end it was McClements, whose bronze in the S9 100m backstroke prompted scenes of euphoria from the small pocket of his team-mates in the stands, who watched the last 25m or so between their fingers.

It hadn’t been a bad night for Wiffen, who missed out on a medal by 0.13 seconds but broke the national record he had set the very same morning.

Call it hindsight, but after the first night there was a palpable feeling that everything was on the table. If day one was anything to go by, NI were primed to go beyond whatever had gone before.

Their cause was aided by the Commonwealth Games’ biggest-ever Para-sport programme, from which the team’s first two medals were delivered courtesy of McClements and Para-triathlete Chloe MacCombe before judokas Yasmin Javadian and Nathon Burns struck bronze at Coventry Arena.

In many ways Bethany Firth’s S14 200m freestyle gold was the least remarkable moment of that Wednesday simply because her dominance of that event, and standing as one of Para-swimming’s biggest stars, was established long before she arrived in Birmingham.

On that same evening, Wiffen and heptathlete Kate O’Connor announced themselves on the global stage with silver medals in two arenas that Northern Ireland have rarely, if ever, had an impact.

O’Connor’s heptathlon silver, behind one of the biggest names in UK athletics in Katarina Johnson-Thompson, was the type of performance that forces the rest of the track community to sit up and take notice.

Similarly Wiffen took second in the 1500m freestyle with a time that would have put him sixth in last year’s Olympic final.

What’s most exciting about O’Connor and Wiffen is that both are 21, and with their best years in front of them have in the last 11 days taken a huge stride towards joining the absolute elite competitors in their chosen field.

This, perhaps, will in time come to be what NI’s performance at Birmingham 2022 is most notably remembered for.

All the while the snowball kept picking up pace. McClenaghan found himself in that peculiar position of being initially disappointed by a major silver medal, but in the context of a disappointing 2021 the Ards man concluded it was evidence enough that he is on the right track.

Meanwhile over in the quaint surroundings of Royal Leamington Spa’s Victoria Park, Northern Ireland’s perfect blend of youth and experience were running amok through the competition in the lawn bowls men’s fours.

Martin McHugh and Ian McClure partied like it was 1998 as they recaptured the title 24 years on from Kuala Lumpur, this time alongside Sam Barkley and Adam McKeown. Then just a couple of hours later Gary Kelly took silver in the men’s singles.

It set things up nicely for the final day, where six NI boxers had advanced to finals after Eireann Nugent had taken bronze.

Carly McNaul, she of two surgeries and a broken femur since 2018, returned to the ring and claimed silver. The 33-year-old has already set her sights on the Paris Olympics.

Then came the fantastic five. On Sunday at the National Exhibition Centre, Northern Ireland’s five gold medallists catapulted their team up the medal table on a day that will go down as surely Team NI’s greatest.

As the madness unfolded at the NEC, Ciara Mageean used all her experience to break clear of her competitors alongside Laura Muir and take a silver which, like her athletics team-mate O’Connor’s achievement, was a display worthy of global appreciation in an immensely competitive race.

Of course for those trying to cover the Games, the only maddening thing was that the athletics and the boxing took place some 10 miles away from each other.

But by this stage, it had long been established that one could not cover every event. The only thing to do was try to take as much of it in as possible and acknowledge the magnitude of what Team NI accomplished.

There is only so many times you can reiterate how impressive their medal haul is.

Although I suppose it’s fitting that in these most historic of Games, it’s rather easy to sound like a broken record.