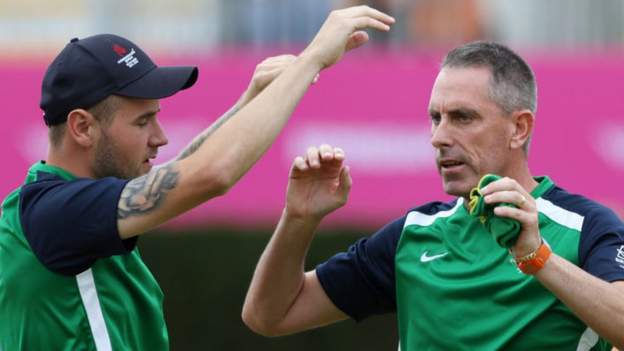 Northern Ireland have secured their best-ever medal haul at a Commonwealth Games as the men’s fours won their lawn bowls semi-final to take Team NI’s guaranteed tally to 16.

Birmingham 2022 overtakes Edinburgh 1986 as their most successful Games, with the chance of more medals to come.

The men’s fours will go for gold against India on Sunday having defeated Wales 18-9 in their last-four tie.

The team includes Martin McHugh and Ian McClure, who won the event in 1998.

Twenty-four years on the experienced duo joined forced with Sam Barkley and Adam McKeown, neither of whom were born when their team-mates won gold in 1998, to deliver NI’s 16th guaranteed medal in Birmingham.

It could get better still with men’s singles bowler Gary Kelly also in a gold medal match on Saturday.

The men’s four win was delivered courtesy of a dominant final five ends, with Wales leading 9-8 after 10.

From then NI took over, winning each of the remaining ends to ultimately run out comfortable winners and set-up a meeting with India, who put out hosts England with the very last bowl of a dramatic game on rink 10 at Victoria Park.

Earlier on Friday NI put out Scotland to advance to the last four, and backed it up with a second straight win over home nation opposition.

“This is one of the best feelings in the world, it really is,” said Barkley.

Kelly one win away from gold

It was a successful day for NI in Leamington Spa, with Kelly earlier booking his place in the men’s singles final in emphatic fashion.

He beat South Africa’s Jason Evans 21-12 to set up a final against Malaysia’s Fairul Izwan Abd Muin on Saturday.

However, the women’s pairs team of Megan Devlin and Shauna O’Neill missed out on a semi-final place in a 15-11 defeat by Malaysia.