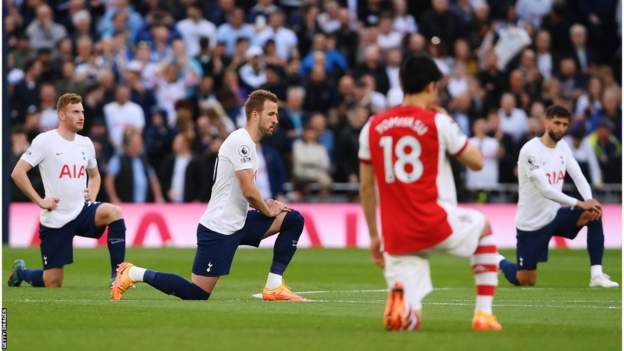 Premier League players will stop the pre-match anti-racism gesture of taking the knee before every match.

Top-flight clubs started taking a knee to support the Black Lives Matter movement, which rose to prominence following the death of George Floyd in the United States in May 2020.

Premier League captains took the decision after consulting with players.

The gesture will instead be seen before certain rounds of games, including the Boxing Day fixtures and Cup finals.

Players and staff will also take the knee before the first and last matches of the 2022-23 campaign.

Captains and players are said to believe that ‘less is more’ – hoping when the knee is taken it will have greater impact.

The gesture was inspired by NFL player Colin Kaepernick, who decided on the silent protest against racial oppression by kneeling during the US national anthem.

However, Crystal Palace forward Wilfried Zaha stopped in February 2021, saying at the time that “at the moment it doesn’t matter whether we kneel or stand, some of us still continue to receive abuse”.

“For two years now the taking the knee has become part of the pre match ritual. The players fear its losing power and momentum and we will see it take place in a different format.

“It’s up to the players to decide themselves and we support them in whatever decision they make as do the clubs.”