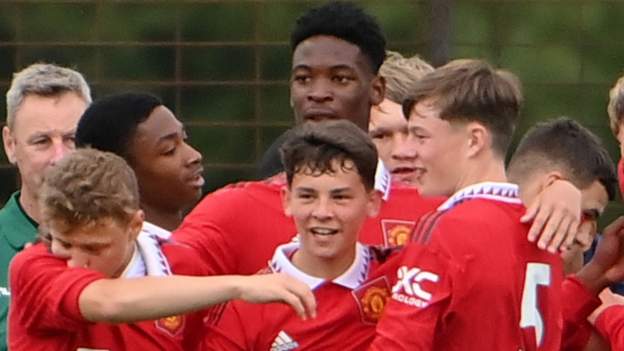 Ipswich Town and Manchester United clinched the Premier and Junior titles at SuperCup NI in Ballymena.

Two superb Sean Moore goals saw County Antrim come from 2-0 down to level against Ipswich in the Premier Final.

But a Jack Manly effort and a Gerrard Buabo goal after a defensive mix-up saw Ipswich secure a deserved 4-2 win.

Both goals came in the first half after Rangers had made a promising start.

Lacey won United’s penalty as he was upended by Bailey Rice in the 17th minute.

Parker doubled United’s lead nine minutes later as he headed home a Lacey corner, which had come after Mason Munn’s magnificent save to deny a thunderous drive from the impressive Adam Berry.

Rangers substitute, Ballymena native, Callum Burnside had a chance to pull a goal back just before half time but was unable to get full purchase on a header, with United holding on to their lead in the second period.

In the Premier Final, outstanding Ipswich playmaker Nico Valentine waltzed his way through the County Antrim defence to put his side ahead on eight minutes.

His run then set up Ben Haddock to double Ipswich’s lead but Moore pounced on a defensive mistake to rifle into the roof of the net and he levelled three minutes before half time with another superb finish.

Both sides hit the woodwork as Ipswich’s Ash Boatswain struck a post and County Antrim’s Lewis Tennant hammered against the crossbar from all of 35 yards.

But seconds after Tennant’s fierce shot, Ipswich were suddenly in the lead again as Boatswain and Finley Barbrook set up Manly to score from close range.

County Antrim keeper Orann Donnelly kept his side in the game with a superb save to deny Valentine but a mix-up between the custodian and centre-back Aidan Lillis then gifted Ipswich’s fourth goal to substitute Buabo.

Ipswich were only late entrants into the competition after Ghanaian football academy, The Right to Dream were unable to travel to Northern Ireland.

US club Surf Select beat Glentoran 3-1 in the Minor Final in Coleraine as two Cristiano Briceno goals and a Mohammad Moustafa penalty saw them cancelling out Joel Kerr’s initial goal for the Belfast club.

The victory saw them become the first US team to clinch a trophy at SuperCupNI and they then secured a double success by winning the inaugural Girls Final as they edged out Rangers 2-1 at Dixon Park in Ballyclare.

Kyleigh Sekulich put Surf Select’s girls ahead before Alexis Leith doubled their advantage before half time.

Mia McAuley pulled a goal back for Rangers late on with one of the goals of the tournament from long range but the Americans held to take victory.

Charlton won the Youth Final in Coleraine by overcoming Glenavon 3-1.

Zach Cooley headed a third Charlton goal on 54 minutes before Harrison Crooks pulled back a late goal for Glenavon.