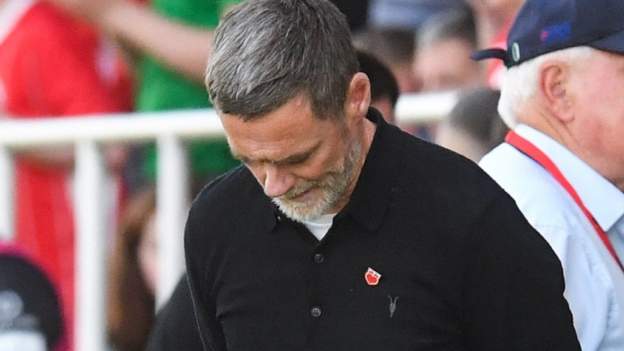 The 50-year-old, who was appointed in January 2021, watched his side go down 3-0 on aggregate to Irish side Sligo Rovers in Europa Conference League qualifying on Thursday.

Despite finishing fifth in the Scottish Premiership last term, the Fir Park side have won just five games in 2022.

Chairman Jim McMahon told the Motherwell website: “Graham asked to speak with us early on Friday morning and everyone agreed that it would be best to make a change.

“Things haven’t gone as well for a spell in 2022 and, although the timing is not ideal, we hope a change will bring about fresh impetus for everyone ahead of the 2022-23 season.”

Former Salford City boss Alexander took over from Stephen Robinson 18 months ago with only goal difference keeping Motherwell off the foot of the table.

The former Scotland defender would steer them to safety before a prosperous start to the 2021-22 campaign had the Fir Park club in the fight for Europe.

However, troubling form and performances blighted the second half of their campaign, recording just three league victories on the way to finishing fifth.

A 1-0 first-leg home defeat by Sligo started their season off last week before they were undone again in a 2-0 reverse on Thursday.

Motherwell have yet to announce who will be in the dugout for Sunday’s Premiership opener away to St Mirren.

Alexander said: “I have thoroughly enjoyed my time at Motherwell and leave with nothing but good wishes for the club in the future.

“I’m proud that we came in with the club joint bottom of the Premiership and, 18 months later, leave having first secured our Premiership status then qualified for Europe in our first full season. Our points tally in that time is only behind Rangers and Celtic.”