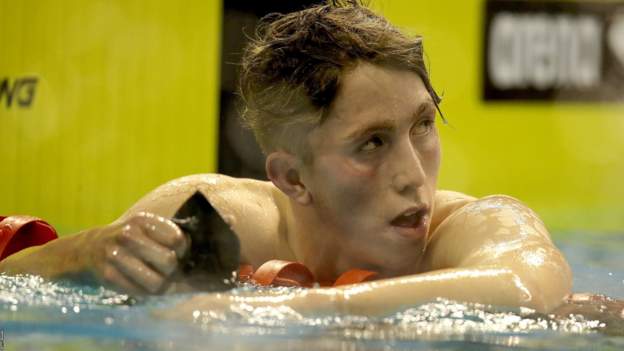 Northern Ireland’s Daniel Wiffen has qualified fastest for the men’s 400m freestyle final at the Commonwealth Games in Birmingham.

The 20-year-old won the second of three heats in an Irish record three minutes 47.43 seconds, 1.3 seconds quicker than he had swum before over the distance.

Wiffen’s best hope of a medal was thought to be the 1500m freestyle.

But his performance in the heats has now made him one of the favourites for Friday evening’s final.

Wiffen holds something of a monopoly over Irish men’s freestyle records, with his name atop the national 400m, 800m and 1500m boards.

Northern Ireland’s multiple Paralympic gold medallist Bethany Firth was also in action on the opening day of competition at the Sandwell Aquatic Centre.

Firth finished sixth in heat three of the women’s 200m freestyle in 2:08.34, but her best chance of success will come in the Paralympic version of the same event later at the Birmingham Games.

Victoria Catterson, 21, from Belfast, swam impressively to make the final as the seventh fastest qualifier in 1:59.86.

Her fourth place swim in her heat represented a new Irish record.

Grace Davison was sixth in the same heat in 2:10.00 but did not make the final.

Barry McClements will compete in the pool in the men’s 100m S9 category on Friday night.