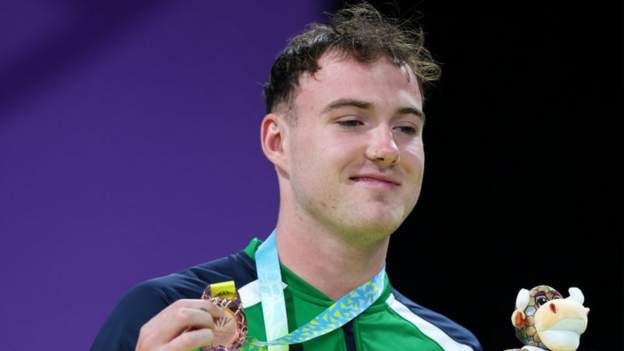 Barry McClements clinched Northern Ireland’s first ever swimming medal at the Commonwealth Games with a stunning bronze in the men’s 100m backstroke S9.

The Ards Para-swimmer clocked 1:05.09 to hold off Australia’s Harrison Vig and take third.

Earlier, Northern Ireland’s Daniel Wiffen missed out on bronze in the men’s 400m freestyle final by an agonising 0.13 seconds.

World champion Elijah Winnington led home an Australian one-two-three with a time of 3:43.06.

McClements made his Paralympic debut for Ireland at last year’s rescheduled Tokyo Games, and looked to carry the experience gained into his Commonwealth campaign.

He produced a fast start in Birmingham and was narrowly third at the turn with Australian Vig gaining ground on him going down the stretch, but not enough to stop McClements claiming a sensational bronze.

“Me and Daniel Wiffen were having a bit of a joke to see who would do it (win a medal) first,” McClements joked.

“To be the first is just awesome. That last 15m I could see (Vig) catching me and I was thinking ‘just hang on, just hang on’.

“I knew roughly if I beat him I’d be in with a good shot so I just tried to hang on.”

Despite the disappointment of missing out on the podium, it was another excellent swim from Wiffen, who shaved nearly a second off the Irish record he set in qualifying on Friday morning.

The Armagh man clocked 3:46.62 but could not get to the wall ahead of defending champion Horton, although his strong showing does bode well for his favoured 1500m freestyle event on Tuesday.

Grace Davison was sixth in the same heat in 2:10.00 but did not make the final while Kaitlin McCaw exited from the women’s 100m butterfly after finishing seventh in her heat.

Northern Ireland’s multiple Paralympic gold medallist Bethany Firth was also in action on the opening day of competition at the Sandwell Aquatic Centre.

Firth finished sixth in heat three of the women’s 200m freestyle in 2:08.34, but her best chance of success will come in the Para-swimming version of the same event later at the Birmingham Games.