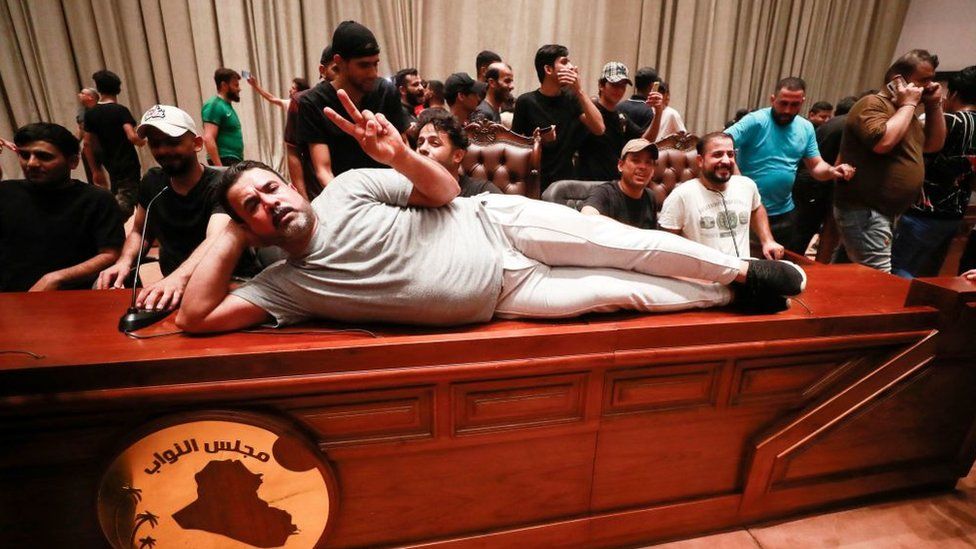 Hundreds of protesters have breached a high-security zone in Baghdad and broken into Iraq’s parliament building.

The supporters of cleric Muqtada al-Sadr oppose the nomination of a rival candidate for prime minister.

Mr Sadr’s political alliance won the most seats in last October’s general election, but it is not in power due to political deadlock following the vote.

Police reportedly fired tear gas and water cannon at the protesters. No lawmakers were present at the time.

The group penetrated Baghdad’s closely-guarded Green Zone – which is home to a number of the capital city’s most important buildings including embassies.

A security source told the AFP news agency that the security forces initially appeared to have halted the intruders, but they then “stormed the parliament”.

Iraq’s current prime minister, Mustafa al-Kadhimi, called on protesters to leave the building while the crowd sang, danced and lay on tables.

The unrest follows nine months of stalemate, during which disputes between the country’s different political factions have prevented the creation of a new government.

But it has proved impossible since then to build a new governing coalition, as Mr Sadr has refused to work with rivals.

He and his supporters have opposed the candidacy of Mohammed al-Sudani for prime minister, as they believe him to be too close to Iran.

Wednesday’s scenes served as a reminder of the multiple crises faced by Iraq, despite its oil-rich status.

Mass protests erupted in 2019 amid public anger over corruption, unemployment and the state of public services.

Hundreds of people were killed by the security forces at the time, according to Human Rights Watch.

On Wednesday, the UN mission in Iraq said protesters had a right to demonstrate – as long as their actions remained peaceful and legal.