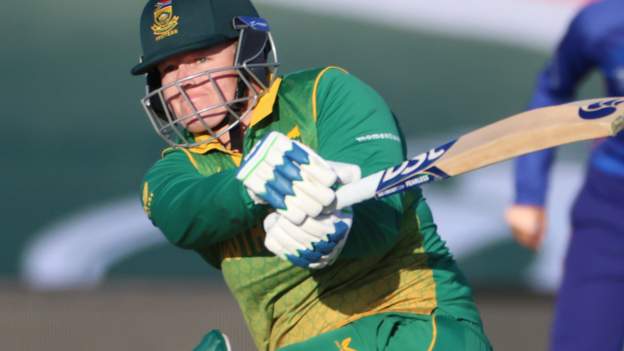 After calling time on her international career, South Africa batter Lizelle Lee still has some regrets despite racking up some prestigious personal awards.

However, having stepped back from the Proteas squad ahead of the ongoing ODI series against England, her thoughts are often drawn back to the World Cup semi-final defeat against the same opposition in March.

Lee was part of the South Africa team that was at the wrong end of a 137-run pasting in New Zealand, in a repeat of the outcome at the same stage of the tournament in 2017.

This year’s World Cup exit, on her 100th ODI appearance, still rankles, more so since the Proteas emerged victorious against England in the group stages.

“The award is something that’s an extra. That’s literally the last thing we think about when playing,” she told BBC Sport Africa.

“Having a repeat of the 2017 World Cup semi-final result wasn’t great, but we have to learn from it and pull ourselves together. Hopefully we can change it around in the next four years.”

The hard-hitting opener was recognized for a stellar 2021 for the Proteas, smashing 632 runs in 11 ODI innings at an incredible average of 90.28.

During the course of her purple patch, Lee registered her career-best international score of 132 not out in the third ODI of the series against India last March.

The Leading Woman Cricketer in the World award, meanwhile, came from Wisden, commonly regarded as the ‘Bible of Cricket’.

Yet despite the 158-year-old annual publication’s place in the sport’s folklore, she is candid enough to admit she had never heard of it before.

“I never knew about Wisden – it was only after I got the award that I found out about the publication and its place in cricketing history,” she said.

“Of course, I feel extremely honoured to have received the award,”

South Africa first played a Test after arriving in England, with the one-off encounter ending in a draw following a rain-affected final day in Taunton.

Lee was out for a first-innings duck before making 36 second time around, a small improvement on her performance in her only previous Test in her career when she was dismissed for four and two against India in 2014.

Last’s month’s Test was just South Africa’s fifth over the format, with Lee saying it was “quite amazing” to face England in the longest form of the game.

Speaking before her decision to step back, Lee said the three-match ODI series against England, which precedes a three-match T20 series, represents a great opportunity for the Proteas.

“You always want to beat the team that beat you in the World Cup semi-final so I think this tour is going to be crucial for us,” Lee said.

Turning away from teaching

It says a lot about the massive growth of women’s cricket that Lee took something of a gamble in 2014 when she stopped short of completing her teaching qualification to focus on playing.

It was in August that year that she was one of 14 women to be handed contracts by Cricket South Africa.

She has not looked back since, securing deals in Australia’s Big Bash and both the Women’s Super League and The Hundred in England, and she will now focus on playing domestic T20 cricket around the world.

“Teaching is something that one has to have passion for,” she said.

“When I look back I don’t regret it, because I can’t see myself standing in a classroom trying to shape the future of young children.”

With an eye on a post-retirement career, Lee is currently doing a course in project management at North West University in Potchefstroom.

“I’m not going to be playing cricket for the rest of my life so it’s important for me to get a degree behind my name. Hopefully, I can complete my degree in a year’s time.”

Born and raised in Ermelo, a small town better known for coal mining in Mpumalanga province, Lee credits her father and brother for developing her interest in cricket.

“They both played the game and I played with them in the back yard,” she said.

“I continued playing when I went to high school and then things happened very fast on my journey to my international debut in 2013. My parents and my brother were probably my biggest supporters and that really helped me to get to where I am!”

South Africa will host the Women’s T20 World Cup next January, and Lee believes that hosting the world’s top women’s cricketers will raise the profile of the game even further.

“I think it’s going to be a special World Cup,” she added. “If you compare it to five, six years ago, the women’s game has grown massively.

“It’s amazing that you can actually, especially in South Africa, tell young women, young girls that when they grow up they can now play cricket for a living.”