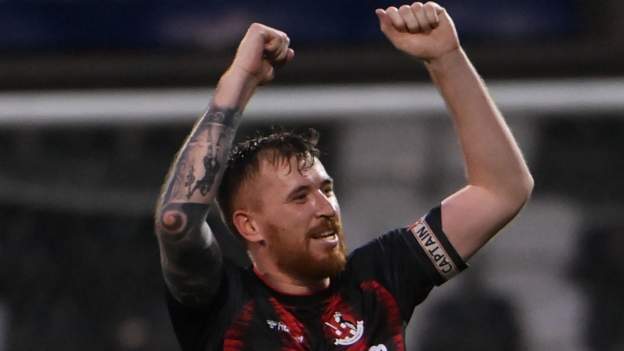 Crusaders hit two late goals to snatch a dramatic victory in the Europa Conference League first qualifying round as Cliftonville and Larne exited.

Billy Joe Burns’ injury-time goal saw the Crues win 3-1 on the night to seal a 4-3 aggregate success over Bruno’s Magpies of Gibraltar.

Another Gibraltar side St Joseph’s beat 10-man Larne 1-0 at Inver Park to win the tie by the same margin.

The Reds lost 3-0 at home to Slovakia’s DAC who sealed a 5-1 aggregate success.

Crusaders levelled the tie on aggregate just after the half hour when Paul Heatley found the net, following up after Magpies keeper Matthew Silva had twice denied Burns.

But Crusaders’ lead only lasted four minutes as Kyle Casciaro restored the visitors’ lead in the tie when he beat the offside trap before firing past Jonny Tuffey.

Heatley forced a second half save from Silva as Crusaders fought to stay in the tie.

Stephen Baxter threw on substitutes Winchester and Johnny McMurray – whose late Irish Cup final winning goal earned Crusaders’ spot in Europe – with 10 minutes remaining and within a minute the pair had combined with great work from McMurray setting up Winchester to put the north Belfast side ahead on the night.

And there was further drama three minutes into injury time when Burns crashed home a spectacular volley to ensure Stephen Baxter’s side’s progressed on a 4-3 aggregate scoreline to see up a second qualifying round tie with Swiss club Basel.

Crusaders’ north Belfast rivals Cliftonville were decidedly unfortunate with the final 5-1 aggregate verdict in their tie.

After Dominik Veselovsky put DAC ahead on 12 minutes, Cliftonville had a couple of great chances to level at Solitude before a magnificent 65th-minute Nikola Krstovic strike put the tie behind reach, with the same player adding a late penalty.

The Reds made a bright start but Norbert Balogh cut inside Levi Ives before squaring for Veselovsky to put the visitors ahead.

An offside call against Reds substitute Joe Gormley also questionable as he chipped the ball into net but the tie was then put beyond reach by Krstovic’s sensational strike from 30 yards after he had been introduced only seconds earlier.

Krstovic completed the scoring on 89 minutes after Talley had tripped the impressive Kacer.

Larne looked well capable of progressing at Inver Park after their goalless first leg in Gibraltar against St Joseph’s but their hopes unravelled in the closing stages as they had midfielder Mark Randall sent off for two cautions.

Almost immediately, the visitors scored the only goal of both legs through Julian Valarino to set up a second round meeting with Czech side Slavia Prague.

It was a hugely disappointing early exit for Tiernan Lynch’s side, who reached the third qualifying round in their maiden European campaign last season.

While Leroy Millar and Lee Bonis combined to fashion a couple of openings for Larne, the visitors once again showed their threat on the break after half an hour as Kevagn Robba was denied by Ferguson.

Larne had the ball in the net from Bonis on 34 minutes following a scramble after a corner but Slovakian referee Michal Ocenáš ruled the effort out for a foul.

And with the home side growing in confidence, they had penalty appeals for handball from a Jeff Hughes cross waved away.

In the second half, Leroy Millar headed narrowly wide from a Randall corner, while Daniel Kearns’ instinctive overhead kick was off target.

But the game swung away from the Irish Premiership side in the final 10 minutes after Randall was dismissed.

Almost straight away, the visitors struck the decisive blow as Valarino, with Larne unable to fashion an equaliser in the remaining minutes.