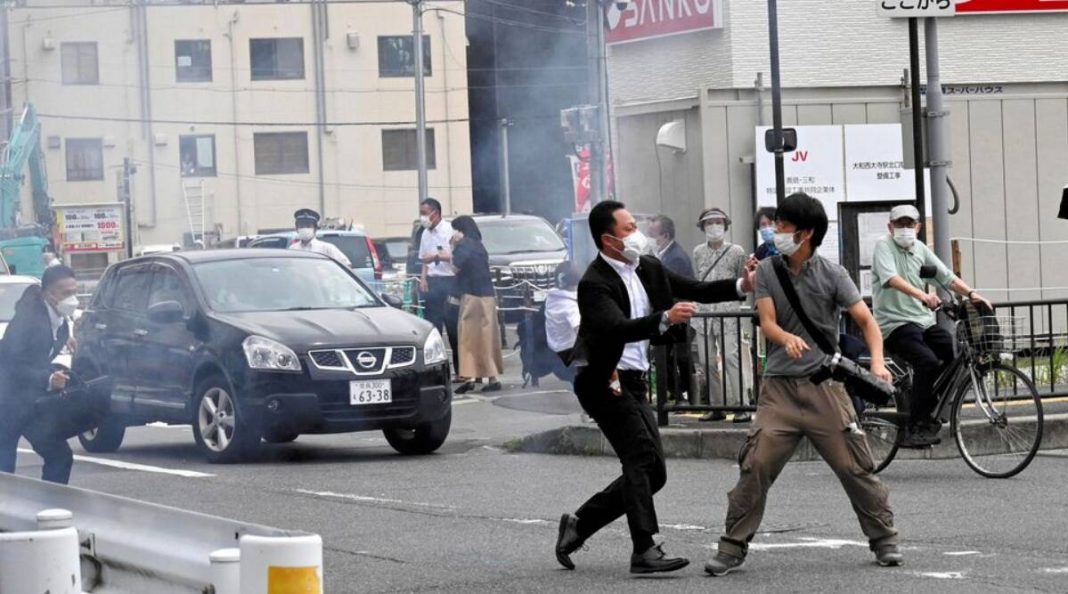 The man who killed Shinzo Abe believed the former Japanese leader was linked to a religious group he blamed for his mother’s financial ruin and spent months planning the attack with a homemade gun, police told local media on Saturday.

Tetsuya Yamagami, an unemployed 41-year-old, identified as the suspect on suspicion of murder on Friday after a man was seen in videos repeatedly shown on Japanese television calmly approaching Japan’s longest-serving prime minister from behind and firing.

Wiry and bespectacled with shaggy hair, the suspect was seen stepping into the road behind Abe, who was standing on a riser at an intersection, before unloading two shots from a 40-cm-long (16-inch) weapon wrapped with black tape. He was tackled by police at the scene.

Yamagami was a loner who did not reply when spoken to, neighbours told Reuters. He believed Abe had promoted a religious group that his mother went bankrupt donating to, Kyodo news agency said, citing investigative sources.

“My mother got wrapped up in a religious group and I resented it,” Kyodo and other domestic media quoted him as telling police.

Nara police declined to comment on the details reported by Japanese media of Yamagami’s motive or preparation.

Media have not named the religious group he was reportedly upset with.

Yamagami jury-rigged the weapon from parts bought online, spending months plotting the attack, even attending other Abe campaign events, including one a day earlier some 200 km (miles) away, media said.

He had considered a bomb attack before opting for a gun, according to public broadcaster NHK.

The suspect told police he made guns by wrapping steel pipes together with tape, some of them with three, five or six pipes, with parts he bought online, NHK said.

Police found bullet holes in a sign attached to a campaign van near the site of the shooting and believe they were from Yamagami, police said on Saturday. Videos showed Abe turning toward the attacker after the first shot before crumpling to the ground after the second.

Yamagami lived on the eighth floor of a building of small flats. The ground floor is full of bars where patrons pay to drink and chat with female hostesses. One karaoke bar has gone out of business.

The elevator stops on only three floors, a cost-saving design. Yamagami would have had to get off and walk up a flight of stairs to his flat.

One of his neighbours, a 69-year-old woman who lived a floor below him, saw him three days before Abe’s assassination.

“I said hello but he ignored me. He was just looking down at the ground to the side not wearing a mask. He seemed nervous,” the woman, who gave only her surname Nakayama, told Reuters. “It was like I was invisible. He seemed like something was bothering him.”

A Vietnamese woman living two doors down from Yamagami who gave her name as Mai, said he appeared to keep to himself. “I saw him a couple of times. I bowed to him in the elevator, but he didn’t say anything.”

A person named Tetsuya Yamagami served in the Maritime Self-Defence Force from 2002 to 2005, a spokesman for Japan’s navy said, declining to say whether this was the suspected killer, as media have reported.

This Yamagami joined a training unit in Sasebo, a major navy base in the southwest, and was assigned to a destroyer artillery section, the spokesperson said. He was later assigned to a training ship in Hiroshima.

“During their service, members of the Self-Defence Force train with live ammunition once a year. They also do breakdowns and maintenance of guns,” a senior navy officer told Reuters.

“But as they are following orders when they do it, it’s hard to believe they gain enough knowledge to be able make guns,” he said. Even army soldiers who serve “for a long time don’t know how to make guns”.

Some time after leaving the navy, Yamagami registered with a staffing company and in late 2020 started work at a factory in Kyoto as a forklift operator, the Mainichi newspaper reported.

He had no problems until the middle of April, when he missed work without permission and then told his boss he wanted to quit, the newspaper said. He used up his holidays and finished on May 15. ($1 = 136.0800 yen)