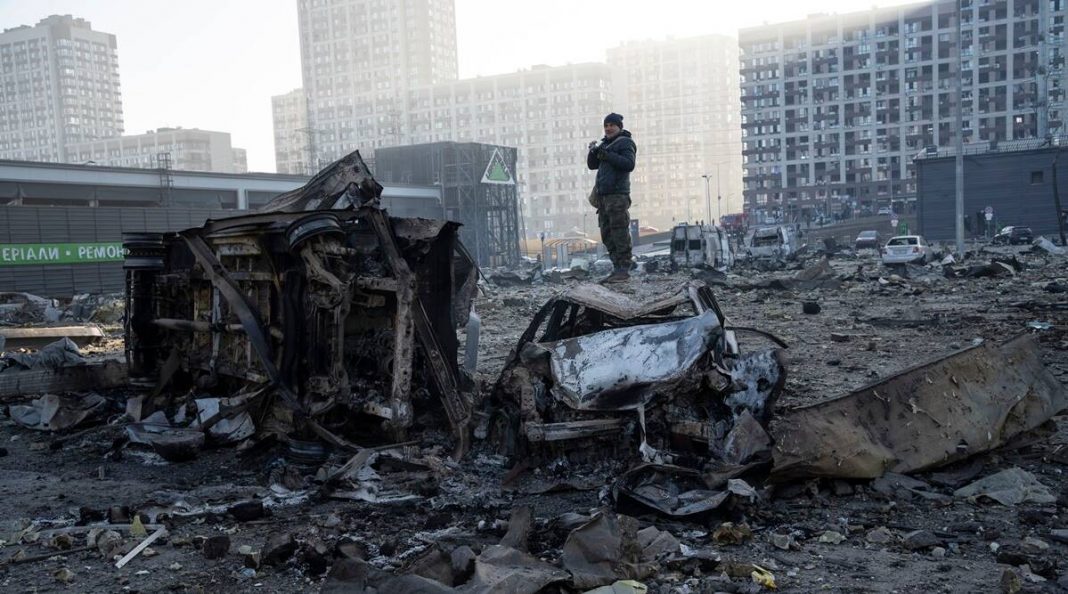 Valentyna Klymenko tries to return home as late as possible to avoid the darkness of her war-damaged home outside Ukraine’s capital. She visits friends, goes to the well for water or looks for a place to charge her phone.

The 70-year-old Klymenko then returns alone to an apartment that used to be noisy and full of life. She is now greeted by dim, damp rooms instead of the voices of her great-grandchildren. Klymenko rarely cooks. She drinks fruit compote and eats canned tomatoes, which she prepared last year, so she doesn’t waste the gas in her portable stove.

She goes to bed quickly, but can’t fall asleep for a long time. Her thoughts revolve around one question: “What will happen to my home? “Russian troops retreated from the area around Kyiv in late March. But they left behind 16,000 damaged residential buildings in the Bucha region, where Borodyanka is located, according to the head of the Kyiv regional administration, Oleksiy Kuleba.

The most affected street in Borodyanka, a town with a population of more than 12,000, was Tsentralna, which was still called Lenin Street less than a decade ago. One of the homes on this street belongs to Klymenko. The shockwave from a Russian airstrike that witnesses say struck the building across the street with two bombs caused a fire in Klymenko’s five-story apartment building.The apartments on the upper floors of Klymenko’s building burned. Four months later, there is no electricity, water, or gas.

Some residents lost everything and ended up on the street without any means to find a new home.“I had a sofa here and armchairs here. But now there are just the springs,” said Tetiana Solohub, pointing to the blackened walls of her home. Nothing is left but a couple of small enamel cups and the suffocating smell of ashes. Solohub’s scorched apartment is located a few floors above Klymenko’s.

They moved into the building at the same time 36 years ago, when it had just been built.“And now, at 64, I am forced to be homeless,” Solohub said. Unlike Klymenko, she even doesn’t have a damaged apartment to live in. Hers is completely gone. Solohub now lives in a camp for displaced people made of shipping containers. It was established in Borodyanka with the support of the Polish and Ukrainian governments.

There are other camps like this in the Kyiv and Lviv regions. It has become a popular way to offer a home to people who can’t return to their own abodes.There are 257 people — 35% of them older residents — living in Borodyanka’s camp. Kostyantyn Morozko, a representative of the military administration in the Bucha region and coordinator of the shipping container camp, said that he expects two containers for 160 people to be added this month. But even this isn’t enough.

He has 700 families waiting. Morozko expects the temporary camp to endure for autumn, winter and spring. He thinks there is a 90% chance that people will remain until then. The first cold weather is expected in early September.The camp’s residents are adjusting to the idea of a long stay. They bring a bouquet of fresh flowers to the shared kitchen every couple of days, the shelves are filled with their belongings, and the tables in their “private” rooms are covered with colourful tablecloths.

But living conditions for older people are challenging. Solohub shares a small, narrow room with plastic walls with two other people. There aren’t many things on her shelf. She didn’t have a chance to rescue her belongings. Because of the summer heat, it is difficult for her to stay in her makeshift home all day. So, she often goes to rest in a small garage with metal walls and no windows near her home. “I have a private space in this garage, and no one bothers me.

I can’t breathe in that plastic house,” Solohub said. ’We want our houses to be restored so we have a place to invite our children and grandchildren.”Klymenko is glad that her apartment didn’t burn down completely. But she doesn’t know when her granddaughter and great-grandchildren will come again. They left for Lithuania in the first days of Russia’s invasion. There, Klymenko’s granddaughter managed to find housing and a job. “It is complicated for children in Lithuania.

They do not know the language. It’s hard for them at school. It’s hard for them in kindergarten. It is tough not to be in your own country. But where can they come back?” Klymenko asked, with tears in her eyes.She was also in Lithuania for several months after being evacuated from her basement the day after the fire in her building. One of the few things she took with her was her great-grandson’s blanket, which she used to protect herself from the cold.

But Klymenko felt uncomfortable outside Ukraine, so she returned to the only place she could at least partially regain her past life.Only she and a neighbor from the same floor now live in the five-story building. It’s bearable in summer, but the cold of autumn will be challenging. Her great-grandson’s blanket lies near her bed. “I’m staying. And I will stay. And I don’t know what will happen next,” Klymenko said.