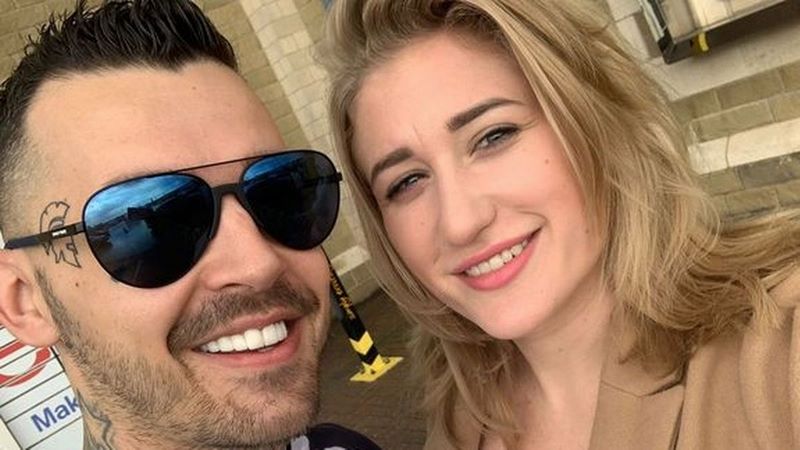 A dad who left his wife for a Ukrainian refugee who was staying with the family says he is no longer allowed to see his kids – but denied being a “monster”.

Tony Garnett, 29, hit the headlines when he walked out on partner Lorna, 28, for Sofiia Karkadym, 22, who had fled her home city of Lviv after Vladimir Putin’s brutal invasion.

He told Yorkshire Live he now faces a torrent of online abuse every day, but said he and his new love are doing “brilliantly” together.

Tony, who owns his own security company, became Sofiia’s sponsor, and just over a week after she arrived at their home he left his partner and children.

He has now made a new life with Sofiia.

He and Sofiia are now renting a house in Bradford and say they are happy with how things have worked out, although Tony says he can no longer see his two children.

Both Tony and Sofiia have been facing a torrent of abusive messages which Tony says are sent by people who do not know the full story. He claims that at no point did he ever say it was “love at first sight” with Sofiia.

He claimed that media organisations have since offered him “silly amounts of money” to speak out but he turned these down.

And he claimed that while Sofiia was in Bradford she had faced “threats and lies” which he had “saved” her from, but said: “No one is interested in the truth.”

“Me and Sofiia are doing brilliantly,” he added.

“To be honest it is going good. We have got our own house; no drama (and) getting to know each other. We’ve had a few obstacles; the house has been rented to us and we are looking for furniture to make it more of a home.”

Family and friends had been supportive because he said: “They know the true story.”

He said: “In terms of the public, they don’t have a clue. I am quite thick-skinned – there’s two sides. I am getting men messaging me saying ‘I wish I could do the same to my wife’ and women asking me to run away with them.

“Sofiia is getting abuse, people calling her a home wrecker, and people talking about petitions to deport her.”

He added: “I want to tell the truth. She is not a home wrecker. I chose to move her here to save her (from the war).

Tony says that he “saved” Sofiia from the clutches of predatory 50-year-old men when she was in Germany as well as “saving” her from criticism when she was living in Bradford.

He says that, because he was sponsoring Sofiia during her stay in the UK, he felt he had to offer her protection and that they had fallen for one another after he had moved out of the family home.

“I didn’t want to pass her from pillar to post,” he added.

“I was making her feel safe and welcome. I felt I had a duty of care.”

And he claimed that his relationship with Lorna had “numerous problems before Sofiia arrived” and had been “on and off.”

Tony says he can no longer see his two children and his relationship with Lorna has broken down.

Another knock-on effect is the amount of abuse he and Sofiia face on social media.

“I don’t reply to no messages, I block them,” says Tony, talking about the ‘hundred’ or so messages he had been sent by members of the public. Not all of them are abusive.

“People have offered support and say they trust our judgment and they understand a man is not going to leave a relationship if something is not going on before.”

He added: “I enjoy banter. I’ve had a few men saying I am an ‘animal’ and that they wish they could do the same to their missus. I am not a monster at all. I sleep very well at night…I saved her from Ukraine and from… abuse. I have done the right thing. Before I put up with things for the sake of my kids. Why did I put up with it?”

And he says Sofiia too has had to put up with abusive messages online, alongside positive and supportive comments.

“She has been called a ‘home wrecking b****’ and that her relationship will end in the same way. People saying that after her visa arrives she will disappear.”

Sofiia told YorkshireLive that she was feeling “okay” and she didn’t worry about what people thought of her.

“I feel okay because when I do something I do the right thing. Of course, there are troubles and some problems. In general, I know why I am doing this.

“I don’t care what other people will say. In general, I will do what I want.”

Sofiia says she speaks to her parents every day.

“They see that we are okay and have no problems. At first, they were shocked of course. But now they see I made the right decision.”

Asked about the future, Sofiia said she wanted to live together with Tony and “hopefully (have a) family like normal people.”

Tony added: “That’s another bridge when we get to it.”