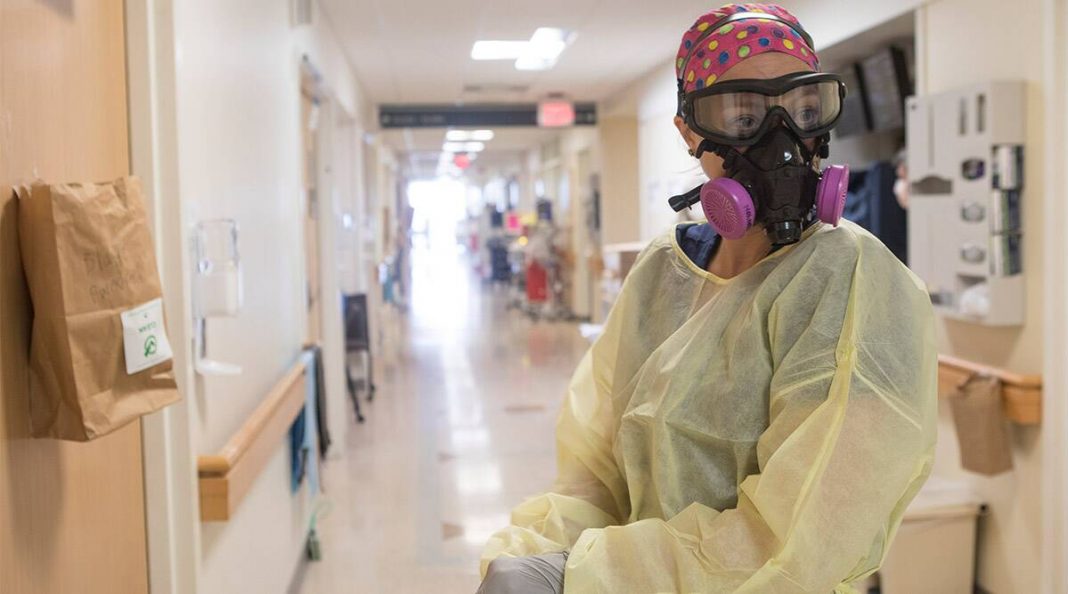 In the early 1990s, long before PPE, N95 and asymptomatic transmission became household terms, federal health officials issued guidelines for how medical workers should protect themselves from tuberculosis during a resurgence of the highly infectious respiratory disease.

Their recommendation, elastomeric respirators, an industrial-grade face mask familiar to car painters and construction workers, would in the decades that followed become the gold standard for infection-control specialists focused on the dangers of airborne pathogens.

The Centers for Disease Control and Prevention promoted them during the severe acute respiratory syndrome outbreak of 2003 and the swine flu pandemic of 2009. A few studies since then have suggested that reusable elastomeric respirators should be essential gear for frontline medical workers during a respiratory pandemic, which experts predicted would quickly deplete supplies of N95s, the disposable filtration masks largely made in China.

But when the coronavirus swept the globe and China cut off exports of N95s, elastomeric respirators were nowhere to be found in a vast majority of hospitals and health clinics in the United States. Although impossible to know for sure, some experts believe the dire mask shortage early on contributed to the wave of infections that killed more than 3,600 health workers.

The pandemic has generated a bevy of painful lessons about the importance of preparing for public health emergencies. From the Trump administration’s tepid early response to the CDC’s bungled coronavirus testing rollout and its mixed messaging on masking, quarantining and the reopening of schools, the federal government has been roundly criticized for mishandling a health crisis that has left 1 million Americans dead and dented public faith in a once-hallowed institution.

Three years into the pandemic, elastomeric respirators remain a rarity at American health care facilities. The CDC has done little to promote the masks, and all but a handful of the dozen or so domestic companies that rushed to manufacture them over the past two years have stopped making the masks or have folded because demand never took off.

Most cost between $15 and $40 each, and the filters, which should be replaced at least once a year, run about $5 each. Made of soft silicone, the masks are comfortable to wear, according to health care worker surveys, and they have a shelf life of a decade or more.

“It’s frustrating and frightening because a mask like this can make the difference between life and death, but no one knows about them,” said Claudio Dente, whose company, Dentec Safety, recently stopped making elastomeric respirators that were specifically redesigned at the request of federal regulators for health care workers.

The government’s tentative approach to elastomeric respirators during the pandemic has largely escaped public scrutiny, even as American mask producers, health policy experts and nursing unions have been pressing federal officials to promote them more aggressively. The masks, they note, are an environmentally sustainable and cost-effective alternative to N95s. Worn properly, they offer better protection than N95s, which, as their name suggests, only filter out 95% of pathogens. Most elastomerics exceed 99%.

The masks have another notable attribute: Most are made in the United States.

Now that hospitals have resumed buying cheap, Chinese-made face coverings and the resurgent American mask industry has imploded, experts warn of the perils of the nation’s continued dependency on foreign-made protective equipment. Many of the U.S. companies calling it quits are startups whose founders jumped into the PPE business out of a sense of civic duty.

Workers inspect the quality of N95 masks on the production line at United States Mask in Fort Worth, Texas, Feb. 5, 2021. Experts say the U.S. government has unintentionally encouraged a dependency on imported masks by failing to promote elastomeric respirators, a reusable mask that is domestically produced. (Cooper Neill/The New York Times)

“It’s sad to see all of this manufacturing capacity come online during a crisis, only to be shut down because hospitals and even our own government would rather save a few pennies buying from China,” said Lloyd Armbrust, president of the American Mask Manufacturers Association. Its membership includes just eight companies that are still producing masks, down from 51 a year ago. He said 17 of the companies have shut down.

Some experts say the CDC’s hands-off approach to elastomeric respirators is unintentionally encouraging a return to the nation’s reliance on disposable masks made overseas. Dr. Eric Feigl-Ding, a public health researcher who heads the COVID-19 task force at the World Health Network, criticized federal officials for inaction despite compelling evidence that elastomerics provide the highest level of protection against aerosolized viruses. “At a certain point, you need to act on the existing science, and the failure to do otherwise is a dereliction of duty,” he said.

To be clear, federal health experts back the use elastomerics but say they are awaiting additional study results before offering full-throated support for their widespread adoption by medical personnel. Emily Haas, a scientist at the CDC’s National Institute for Occupational Safety and Health, or NIOSH, said researchers were still grappling with the need to regularly disinfect them and complaints about muffled communication, although some newer models make it easier for wearers to be heard.

The bigger challenge, she said, is convincing hospitals and group purchasing organizations to embrace the masks given the abundance of N95s, which offer comparable protection during routine medical care and can be thrown away after each use.

“There’s been so much research in the last 10 years that has really supported elastomerics, so in some ways the issue right now is cultural,” Haas said. “No one likes change, and introducing a whole new system of respiratory protection can be a heavy lift.”

Experts say such obstacles could be overcome through more muscular federal leadership. Dr. Tom Frieden, who led an unsuccessful effort to fill the Strategic National Stockpile with elastomerics when he was CDC director in 2009, said the advantages of providing them to frontline medical workers were clear, especially given the nation’s ruinous overreliance on single-use masks. He said health authorities could promote elastomerics by highlighting their cost savings for hospitals and the environmental benefits of a reusable mask to help reduce the tsunami of N95s that end up in landfills. “To me, it’s a puzzle why they haven’t become more widespread,” Frieden said.

Providing an elastomeric respirator to each of the nation’s 18 million health care workers would cost roughly $275 million, according to Nicolas Smit, an expert on elastomerics and executive director of the American Mask Manufacturers Association. By comparison, he noted that the federal government spent $413 million on a disastrous effort to decontaminate N95 masks so they could be safely reused.

James C. Chang, an industrial hygienist, has long been a fan of elastomerics. In 2018, he helped to produce a report on them for the National Academies of Sciences, Engineering and Medicine, and after the short-lived swine flu pandemic of 2009, he persuaded his employer, the University of Maryland Medical Center, to purchase 1,500 masks. The decision was based in part on research that predicted a respiratory pandemic lasting more than a few weeks would lead to catastrophic supply-chain shortages.

“When you ran the numbers, it was pretty clear we’d burn through a six- or seven-digit cache of disposables pretty quickly,” he said. “It’s just not feasible for any hospital to stock that many masks.”

Initially he had a handful of concerns — that their “Darth Vader” look would frighten patients or that disinfecting them would be burdensome. But those fears quickly faded in early 2020 as hospitals across the country scrambled to find N95s, and the CDC issued guidelines saying N95s could be reused up to five times — guidance that evoked widespread skepticism among health professionals.

To deal with the need to disinfect the masks, he set up a system that allowed workers to drop them off after each shift so they could be cleaned before being made available to others.

“It was a real success story on our end because our staff had respirators to wear and they felt more reassured wearing elastomerics than wearing N95s,” Chang said. 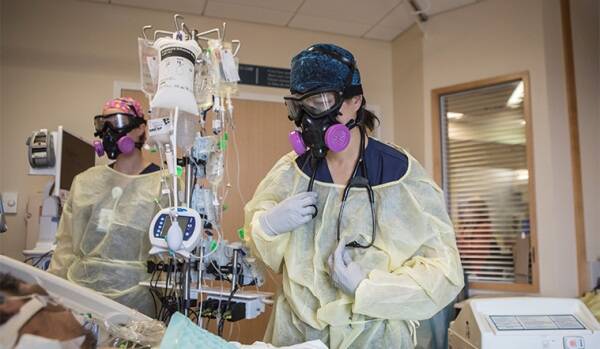 One of the only other hospital systems in the country to adopt the masks on a large scale was Allegheny Health Network of Western Pennsylvania, which early in the pandemic, distributed more than 8,000 respirators at its 14 hospitals. The decision to do so stemmed from a coincidence of geography: Allegheny’s headquarters in Pittsburgh was not far from the manufacturing plant of MSA Safety, a century-old company that got its start producing coal miner protective gear with help from Thomas Edison.

Prompted by an appeal from hospital administrators, MSA began sending over the industrial-grade masks but they quickly ran into a problem. The protruding filters only screened inhaled air, which meant that exhaled air from an infected wearer could pose a potential health risk to those nearby, according to Dr. Zane Frund, executive director for materials and chemicals research at MSA Safety.

Dr. Sricharan Chalikonda, Allegheny’s chief medical operations officer, said he was surprised by just how popular they became among the 2,000 medical personnel who had been outfitted to wear them — a process aimed at ensuring air would not evade the mask’s tight face seal.

According to a paper he published in the Journal of the American College of Surgeons, none of the employees went back to wearing N95s. The cost benefit of relying almost entirely on elastomerics became irrefutable: Outfitting the workers was one-tenth as expensive than supplying them with disposable N95s. A separate study found that after one year, the filters were still 99% effective.

“Elastomerics for us really were a game changer,” Chalikonda said. “When I think of all the millions of dollars wasted on N95s and then trying to reuse them makes you realize how much elastomerics are a missed opportunity.”

This article originally appeared in The New York Times.