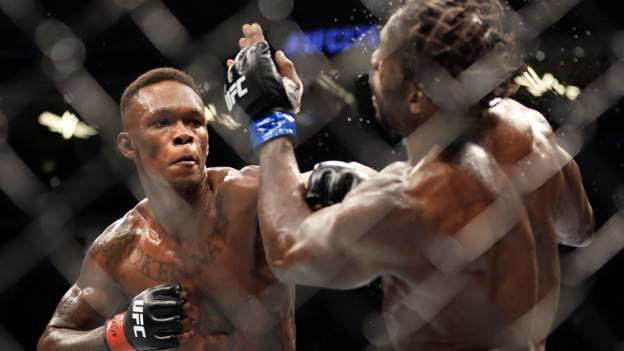 Adesanya, 32, used his superior movement and control of distance to out-strike Cannonier and secure a unanimous decision victory.

Following the win, the New Zealander called out Alex Pereira, who beat Sean Strickland earlier in the night.

“We know who’s next. I’ll put him on skates,” said Adesanya.

The fight has a backstory in that the Brazilian holds two victories over Adesanya in kickboxing before the pair transitioned to MMA.

In the co-main event, Alexander Volkanovski retained his featherweight title with a unanimous win over Max Holloway.

The Australian’s slick movement and counter-punching was the difference over five rounds as he beat his American counterpart for a third time, bringing their epic rivalry to a conclusion.

Adesanya puts on a show

Since Adesanya became middleweight champion in 2019, he has dominated the division, outclassing every type of fighter he has come up against.

In Cannonier, he faced an opponent who has won five of his past six UFC fights, while displaying ferocious knockout power.

Despite Cannonier’s run, he was a heavy pre-fight underdog with bookmakers, with Adesanya saying in he saw nothing in the American’s game which he had not faced before.

The difference between the two was evident from the start.

While Cannonier jogged to the cage with intensity, Adesanya paid tribute to WWE’s The Undertaker, wearing a wide-brimmed hat, carrying an urn and walking slowly towards the octagon with his head bowed.

It was more evidence of the showmanship side of Adesanya which has moulded him into one of the UFC’s biggest stars.

The fight started with the crowd inside the T-Mobile Arena chanting Adesanya’s name as both fighters traded leg kicks.

As the bout wore on, Adesanya found a home for more of his strikes, landing a series of body kicks and rocking Cannonier with a straight right in the second round.

Cannonier’s only route to success during the first few rounds were kicks to Adesanya’s legs as the champion successfully avoided most of the challenger’s output.

During the latter rounds Cannonier resorted to some clinch work, but Adesanya’s excellent takedown defence nullified much of the danger.

The crowd jeered as the fight reached its conclusion – perhaps frustrated at a lack of explosive moments – as Adesanya navigated a successful points victory.

Asked about Pereira, Adesanya said: “I like the story. I’ve said this before that my whole life is like a movie.

“I’m facing the guy who beat me at kickboxing and now he’s chasing me because he knows I’m the king and he wants to take that away from me.

“You guys see what happens when my back’s against the wall. I look forward to fighting him.”

Volkanovski cemented his status as the king of the featherweight division as he outclassed Holloway over five rounds.

The pair’s previous two fights were close with many fans and pundits believing Holloway should have won the second, but there was no doubt on this occasion.

From the first round to the last, Volkanovski, 33, was able to avoid Holloway’s advances while landing a number of counter-punching combinations.

As time wore on, the swelling and blood covering Holloway’s face was in stark contrast to Volkanovski, who displayed little evidence of damage.

At the end of the third round the big screen showed a deep cut above Holloway’s eye, bringing gasps from the audience.

Even during the grappling exchanges Volkanovski was able to turn them round in his favour, leaving Holloway with little route to victory.

After the bell rung signalling the end of the fight, Volkanovski circled the octagon with his fist in the air, confident of another win, whole Holloway turned dejectedly to his corner.

In the post-fight interview, Volkanovski signalled his intent to move up to lightweight.

“I just proved to you I want to be in the octagon as much as possible,” he said.

“I want to be busy and I don’t think this division is keeping me busy now. I’d love to move up a division to keep busy. I want double champ status. Let’s go.”

Cerrone, 39, is a fan favourite in the UFC, fighting 38 times in the promotion since making his debut in 2011.

In defeating Cerrone, 38-year-old Miller broke the record for most victories in the UFC with 24 – an accomplishment fellow American Cerrone would have achieved if he won.

Ireland’s Ian Garry remains unbeaten as he earned a unanimous decision win over Gabe Green for his third victory in the UFC.

The 24-year-old showed some slick combinations as he out-struck the American to extend his MMA record to 10-0.