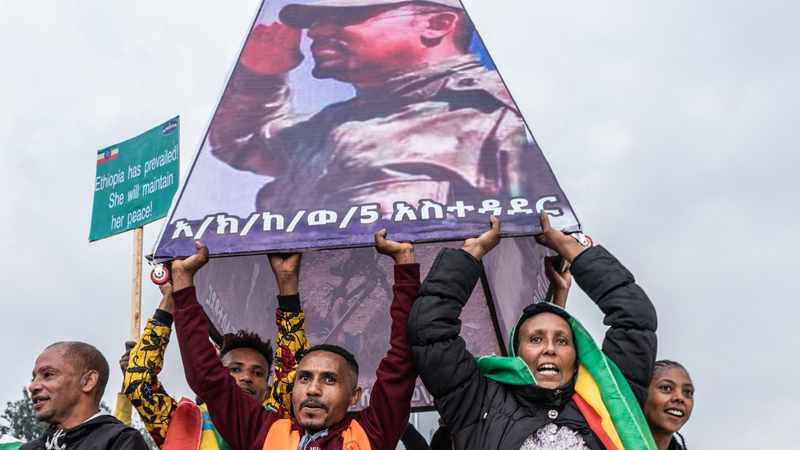 OPINION: Although progress has been made, the process remains difficult because of the land dispute between Amhara and Tigray, the malign role played by Eritrea, and the intensifying war in Oromia

Peace talks are finally on the horizon between Ethiopia’s federal government and leaders of the northern Tigray region, but lasting peace in the country remains a distant hope.

Last week, Prime Minister Abiy Ahmed told parliament that he was forming a committee to study how talks with the Tigray People’s Liberation Front (TPLF) should proceed. This was the first public confirmation of steps taken towards negotiations since the armed conflict broke out 19 months ago.

The TPLF responded by indicating that they would send a delegation and that they were prepared to participate in a “credible, impartial and principled” peace process.

The federal government’s war effort was co-ordinated with leaders in Eritrea and Amhara, but the relations are strained owing to Abiy’s back-channel talks with the TPLF. Abiy’s willingness to enter into negotiations with Tigray’s leaders may reflect a growing weariness with the war and that his priority is shifting to tackling the insurgency in Oromia.

Negotiations could begin by the end of the month in either Kenya or Tanzania, and it is expected that they will comprise two delegations with five members each.

Olusegun Obasanjo, the AU’s Special Envoy for the Horn of Africa, has been trying to mediate a ceasefire since last September. Despite some reservations, the federal government is supporting Obasanjo’s AU-led process in Arusha, Tanzania.

TPLF leaders are pushing for the peace talks to be hosted and facilitated by Kenya, with support from the US and other international partners. There is a perception among the leadership of Tigray that Obasanjo’s engagement has been lacklustre and he is biased in favour of Abiy’s government.

China is also hosting a peace conference in Ethiopia’s capital, and its Horn of Africa envoy offered to mediate disputes “based on the will of countries in this region”, The Ethiopian government, much like the TPLF, has yet to respond to this offer.

Over the past six months, fighting in the north has been limited to small-scale confrontations mostly between Tigray’s army and Afar or Eritrean forces.

Several confidence-building measures have taken place since Abiy declared a humanitarian truce on March 24. The Ethiopian government blocked aid from entering the region for much of the war, leading to famine conditions.

The flow of aid has gradually increased since then but remains insufficient. Basic services, such as electricity, banking and communications, also remain largely shut off in Tigray.

After the first seven months of the war were defined by attacks on Tigray by Ethiopian, Amhara, and Eritrean forces, the Tigray Defence Forces (TDF) recaptured the region in June last year then invaded the neighbouring Amhara and Afar regions. Having retreated from Amhara last December, the TDF withdrew from Afar at the end of April.

In late May, following weeks of talks between military commanders on both sides, the TPLF released 4 208 prisoners of war. However, the federal government denied that those released were its soldiers and reneged on its own promise to release prisoners. Reports indicate that at least 9 000 Tigrayan civilians remain in detention.

Tigray’s President, Debretsion Gebremichael, has put forward a list of non-negotiable preconditions for peace. These include the free movement of humanitarian supplies, the restoration of services, removing the terrorist designation, reparations for war damages, accountability for “genocide,” restoring Tigray’s pre-war borders, and holding a referendum on independence. The TDF will also not accept that its forces be disarmed.

Some of the demands, though legitimate, will be difficult, if not impossible, to achieve in practice. Most notably, accountability is often sacrificed in the name of peace.

The biggest obstacle to peace is the territorial dispute between Amhara and Tigray regions, which is marked by zero-sum attitudes.

Abiy’s regime allied with Amhara armed forces against the TPLF at the war’s outset and facilitated the violent and extra-constitutional annexation of Welkait, Tsegede, Tselemti, Humera, Raya, and other areas in Tigray. A campaign of ethnic cleansing then took place in which as many as 723 000 Tigrayans were expelled.

The territorial dispute has become the core issue of the conflict. Abiy may be forced to make concessions on Western Tigray to reach a peace deal with Tigray’s leaders, but doing so would further strain his relations with elites in Amhara and Eritrea.

Despite reports that Tigray’s leaders give the impression of gradually abandoning their claims to Wolkait, their position on the territorial dispute has not changed. However, the TPLF is willing to negotiate a ceasefire before the issue is solved.

In an effort by the central government to reassert its authority and reign in potential spoilers, at least 4 000 people were arrested in Amhara last month, including a prominent general, militia members and journalists.

Concerned about being cast aside, the Amhara opposition are demanding to be included in the peace process. Abiy’s secret negotiations with the TPLF and crackdown in Amhara raise fears that he may not back the Amharas on their land claims. Any concession he gives to either side on this issue risks heightening inter-communal violence.

Some political actors see Eritrea as somewhat of an internal player and others portray President Isaias Afwerki as a spoiler.

The former includes Jawar Mohammed, a prominent Oromo opposition leader and Amhara legislators. From this perspective, any process that excludes Eritrea will never bring peace to the country or the Horn of Africa.

The TPLF, for its part, has rejected the inclusion of Eritrea in the negotiations. Many Tigrayans refuse to “sit down with their mortal foe while it controls their territory and does not show an iota of interest in peace after committing abhorrent atrocities”.

Abysmal relations between the TPLF and Asmara date from the 1998-2000 Ethio-Eritrean war and represent a stumbling block to peaceful regional relations.

Including Eritrea could be detrimental to the peace process and it is doubtful that Isaias would even be willing to engage in talks with the TPLF. Any process will, nonetheless, need to take into account Eritrean security interests. Otherwise, there will always be an off-ramp for actors who are not accommodated to go to a holding area and cultivate their grievances. This is the kind of politics we saw from 2000 to 2018.

Fissures and disagreements of vision have begun to emerge between Addis Ababa and Asmara, as Isaias would prefer to eliminate the TPLF militarily. Abiy is nonetheless willing to offer some degree of cover to Eritrea, as indicated in his statements after the recent border clashes between Tigrayan and Eritrean forces.

Abiy’s willingness to negotiate with the TPLF indicates that he intends to focus on putting down the Oromo Liberation Army (OLA) in Oromia.

Federal and regional forces have been fighting the OLA since 2018 and launched a renewed offensive in March. The OLA insurgency has been accompanied by a government counterinsurgency, inter-communal violence between Oromos and Amharas, and a mass arrest campaign of Oromos.

On June 14, the OLA and Gambella Liberation Front attacked government targets in the capital of Gambella region, while OLA launched raids on towns in Oromia. Days after the deadly clashes, footage emerged of security forces shooting an unarmed man in Gambella city. Residents allege that at least 10 people were rounded up and executed.

Reports then emerged on June 19 that more than 200 people, mostly ethnic Amharas, were killed in Gimbi district of western Oromia, one of the locations where the clashes took place. Witnesses and the Oromia regional government blamed the OLA.

The OLA denied the allegations, saying that government soldiers and local militia committed the attack while retreating from their offensive. It accused the Abiy regime of using “the OLA as a scapegoat for any atrocity crimes it commits against civilians.”

While some Oromos in the opposition support the OLA’s armed resistance, others endorse the conciliatory approach Jawar and Bekele Gerba of the Oromo Federalist Congress (OFC) have adopted since they were released from prison in January.

It remains unclear what the possibility of the TPLF striking a deal with Abiy would mean for its strategic alliance with the OLA. There is also the question of whether the TPLF and OLA should be included in the same peace process or separate ones.

The Abiy administration, TPLF, OFC, and others have toned down their rhetoric and shown themselves to be more open to peaceful negotiations. Those who are opposing the very idea of negotiations are becoming fewer and fewer.

While this recent progress has generated a sense of optimism, there remains no timetable for the restoration of essential services in Tigray and Addis Ababa believes a military solution is viable in Oromia.

Although significant progress has been made between Abiy and Tigray’s leaders, the peace process itself remains difficult because of the land dispute between Amhara and Tigray, the malign role played by Eritrea, and the intensifying war in Oromia.

* Patrick Wight holds a PhD in political science and international development at the University of Guelph, Canada. The piece was first published in ACCORD.