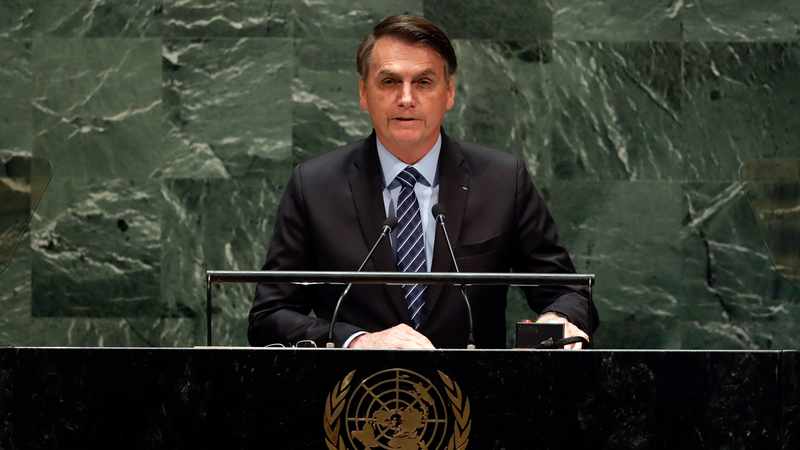 OPINION: The result is an unprecedented battle between right-wing populism and Brazil’s governing institutions, the biggest crisis in the 37 years of democracy. Courts, universities and the media accuse Bolsonaro of demagoguery and undemocratic goals while he and his supporters dismiss them as corrupt elitists.

In Latin America’s most significant election this year, Brazil President Jair Bolsonaro is facing stiff competition from Luiz Inacio Lula da Silva, a leftist former president. However, an even bigger challenge may come from a Supreme Court judge.

Justice Alexandre de Moraes is leading a broad investigation into disinformation that keeps touching the president. Moraes has opened multiple criminal probes into Bolsonaro, ordered the arrest of some of his top backers and briefly banned Telegram, a social-media service often used by Bolsonaro supporters.

All of this has been done in the name of preserving Brazil’s young democracy. For those efforts, Moraes – the author of a highly-cited work on the constitution – has been hailed by some as the guardian of the rule of law.

“He is a warrior, the only one with the courage to stand up to the attacks on our democracy,” said Joice Hasselmann, the government party leader in the lower house before breaking with the president, becoming a vocal critic and then finding social media flooded with images of herself on a pig’s body.

Bolsonaro has fought back against Moraes, defying the court, seeking the justice’s removal and filing a criminal complaint against him for abuse of power. Even some who dislike the president say he’s got a point, and some colleagues of Moraes say privately that it’s time to end the probe.

The result is an unprecedented battle between right-wing populism and Brazil’s governing institutions, the biggest crisis in the 37 years of democracy. Courts, universities and the media accuse Bolsonaro of demagoguery and undemocratic goals while he and his supporters dismiss them as corrupt elitists.

This echoes political struggles in the US, UK, Israel and elsewhere, but Brazil’s institutional safeguards are younger and weaker, heightening the risk.

“We are living in a situation that is beyond absurd,” said Debora Santos, an analyst of the judiciary for XP Inc, Brazil’s largest brokerage, who used to work at the Supreme Court. “Excesses have not been limited to one side, and after each one is committed, it draws an even more drastic response.”

The Supreme Court declined to make Moraes available for comment. The presidential palace didn’t respond to numerous requests for comment. In more than a dozen interviews, former and current justices, members of congress and legal experts expressed fear of the threat they say Bolsonaro poses. Many are also uncomfortable with Moraes, saying he’s overreaching.

The feud seems certain to get worse. Trailing Lula by double digits, Bolsonaro is following Donald Trump’s lead and sowing doubt about the integrity of the voting process. The fact that Moraes himself is due to take charge of the electoral authority six weeks before October’s vote adds fuel to the fire.

Since 2019, Moraes, 53, has overseen what’s widely known as the Fake News Inquiry. The court’s former chief tapped him to investigate lies and threats against the justices and their families. Among tweets and online chatter were threats to kill and rape the daughters of the justices and calls for a return to military dictatorship. Angry mobs gathered outside the court.

Michael Mohallem, a professor at the Law Institute of the Pontifical Catholic University of Rio de Janeiro, says that the court has cast itself as both victim and judge, a move that will haunt it. “Once you cross that line, you have extra work to say why that same precedent doesn’t apply again,” he said.

Defenders of the investigation say the justices are in danger and must stand up for themselves and their institution – that extraordinary times warrant extraordinary measures.

“When evil has all the audacity, good must have all the courage,” Christian Lynch, a political scientist at the State University of Rio de Janeiro, said in defence of the probe, quoting a 19th century French politician.

A former army captain who began in politics with no major party affiliation, Bolsonaro, 67, made his name railing against Brazilian institutions. He has praised the former military dictatorship and often said that “only God can remove me” from power.

The court is his favourite punching bag. In fiery speeches and outside its grounds, he whips up crowds and blasts the judiciary for impeding his agenda and persecuting his family.

“We have everything to be a great nation,” Bolsonaro said in April at the presidential palace. “What’s missing? That a few stay out of our way. If you don’t have ideas, shut up. Put on your robe and stay put.”

In hunting down the source of death threats and online conspiracies, Moraes has directed the federal police to investigate the allegation that has dogged Bolsonaro since his election: that a network of pro-Bolsonaro advisers, businessmen and bots are spreading lies and vitriol.

The group has been called a “digital militia” and Bolsonaro’s “office of hate.” Bolsonaro denies it exists. But Moraes says there are “strong indications of the existence of a criminal organization” and has arrested some of the president’s most outspoken allies.

Moraes himself isn’t apolitical. A professor at University of Sao Paulo, he began as a prosecutor there and forged ties with the state’s establishment. He later held cabinet positions under the three-term governor Geraldo Alckmin, Lula’s running mate in October. With his shaved head and well-tailored suits, he’s been likened to the protagonist of the 70’s TV crime drama “Kojak”.

Brazil has seen the recent impeachment of a president (Dilma Rousseff in 2016) and the jailing of Lula, 76, who left office the most popular leader in Brazil’s history. Moraes was part of the Supreme Court majority that rejected Lula’s appeal, and the one that later overturned convictions, enabling him run for his third presidential term. But in neither case was the backlash to the court so great as today.

Moraes’s inquiry is under seal, meaning his moves require faith in his integrity. But he is also overseeing other probes into Bolsonaro – his spreading falsehoods about Covid-19 vaccines and unproven claims that the electronic voting system can be hacked.

The investigations pose the biggest threat to the way the president energizes his base, and he’s pushed back hard.

Last September 7, Brazil’s independence day, Bolsonaro rallied tens of thousands to the streets of major cities and called Moraes a “scoundrel,” saying he’d no longer comply with his orders: “To us, he is no more.”

Bolsonaro’s predecessor, Michel Temer – who named Moraes justice minister and nominated him to the 11-member Supreme Court in 2017 – helped broker a phone call between the president and judge. Bolsonaro issued a written apology but tensions have simmered.

Last week, at a closed-door dinner with congressional leaders, Moraes and the president spoke privately. Bolsonaro later said the two sought an understanding but warned about the dangers of continued “interference” from the court. “At some point, a tragedy will happen that we don’t want,” he said.

Some who know Moraes describe a man under growing distress. He and and family receive death threats and are constantly accompanied by security details. Others say he revels in the conflict and is doing vital work.

“Those who are against say, ‘this has never happened before,’ but no one has ever threatened the Supreme Court like this,” said Rafael Favetti, a lawyer and consultant in Brasilia who previously worked as an aide on the Supreme Court.

Moraes has been very public in his assertion that the system needs to be defended against threats. “Freedom of speecth is not freedom of aggression,” he told university students in April.

He sentenced a Bolsonaro congressional ally, Daniel Silveira, to prison for nearly nine years for posting a video threatening the justices. Some condemned it as excessive. The next day, Bolsonaro granted Silveira a pardon.

“It is a game of cat and mouse,” said Henrique Neves, a former minister of Brazil’s electoral court. “For every measure that’s taken, a countermeasure is created almost instantly.”

* The article was first published in the Washington Post.