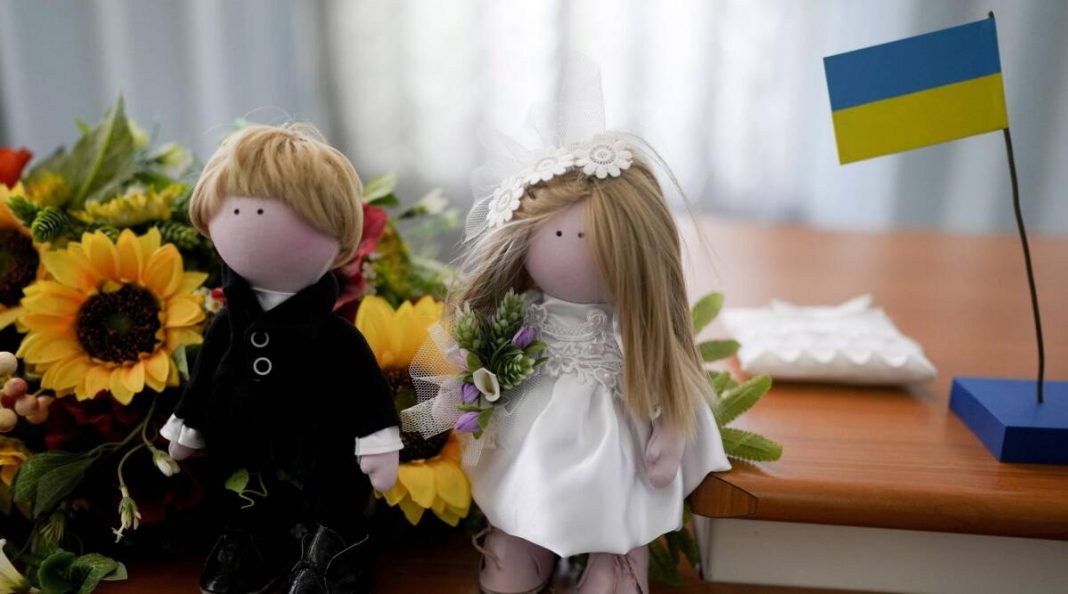 When the couple awoke to the rumble of war on Feb. 24, they’d been dating for just over a year. Russia was invading and Ihor Zakvatskyi knew there was no more time to lose.

He fished out the engagement ring he’d bought but, until then, not yet been ready to give to Kateryna Lytvynenko and proposed. If death do us part, he figured, then let it be as husband and wife.

“I did not want to waste a single minute without Katya knowing that I wanted to spend my life with her,” Zakvatskyi, 24, said as he and his 25-year-old bride exchanged vows and wedding rings this month in the capital, Kyiv.

The newlyweds joined a growing army of Ukrainian couples who are speedily turning love into matrimony because of the war.

Some are soldiers, marrying just before they head off to fight. Others are simply united in determination that living and loving to the full are more important than ever in the face of so much death and destruction.
Ukraine’s wartime martial laws include a provision allowing Ukrainians, both soldiers and civilians, to apply and marry on the same day. In Kyiv alone, more than 4,000 couples have jumped at the expedited opportunity. Before the war, a one-month wait was the norm.

After a three-month interruption in normal service, Kyiv’s Central Civil Registry Office is fully open again and working almost at a prewar pace. Since Russia withdrew its badly bloodied invasion forces from around Kyiv in April, redirecting them to front lines east and south, many people who’d fled the fighting have returned. Weddings have increased accordingly.

The returnees include Daria Ponomarenko, 22, who fled to Poland. Her boyfriend, Yevhen Nalyvaiko, 23, had to stay, because of rules preventing men aged 18 to 60 from leaving the country.

Reunited, they quickly wed — because “we don’t know what will happen tomorrow,” she said.
Jealously guarding their intimacy after their painful months apart, it was just the two of them, without friends and family. Rather than a puffy bridal gown, she wore a Ukrainian embroidered shirt, the traditional Vyshyvanka chosen now by many brides to stress their Ukrainian identity.

In peacetime, they would have opted for a traditional wedding with many guests. But that seemed frivolous in war.

“Everything is perceived more sharply, people become real during such events,” he said.
Anna Karpenko, 30, refused to let the invasion crimp her wedding — she arrived in a white limousine.
“Life must go on,” she said. She and her new husband dated for seven years, often talking about marriage, before the war turned the plan into action. 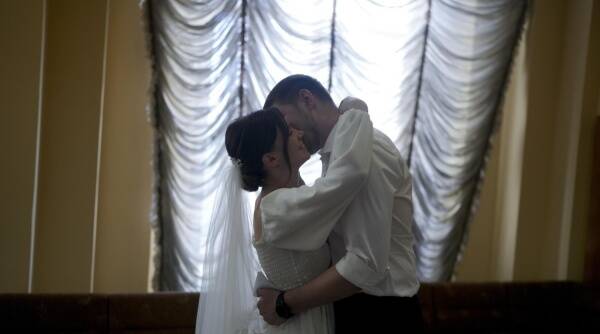 Pavlo and Oksana Savryha already had 18 years of civil marriage under their belts before the invasion prompted them to renew their vows — this time in a small 12th-century church in the war-damaged northern city of Chernihiv.

“Our souls told us to do so. Before the invasion, we were constantly running somewhere, in a hurry, and the war forced us to stop and not postpone the important decisions until tomorrow,” Pavlo said.

With Oksana sheltering in the basement of their home, her husband took up arms, joining a territorial defense force, when Russian forces surrounded and bombarded Chernihiv in the initial failed stage of the invasion.
He subsequently joined the regular army. They celebrated their love in church this month.
The next day, he was sent to the front. (AP)