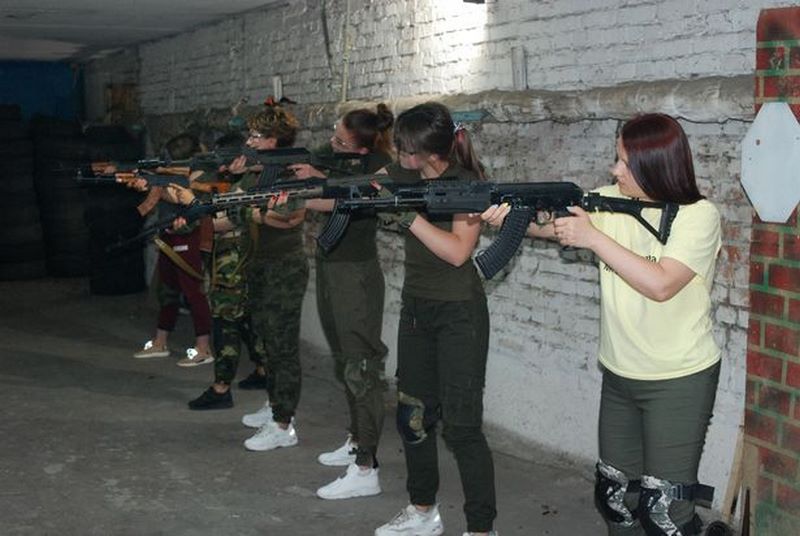 Ukrainian fighter experts have created a programme in Zaporizhzhia in the south east of the war-ravaged country to teach civilian women and girls who are old enough how to use the killer automatic guns.

The Ukrainian soldiers, armed with Kalashnikovs, are trained in a variety of urban war skills and fighting tactics which show Ukraine is preparing for a long war of resistance.

The country’s army has 240,000 fighters up to a million volunteer and foreign fighters also add to their fire power.

In March, The Mirror told how bereaved Ukraine women have joined the frontline of the conflict with arms and warn Putin “you will pay” for killing their children and loved ones.

Furious grieving mothers have joined the battle in Ukraine for blood, as they seek to avenge the deaths of their children.

Some ran beauty therapy businesses, but now they are undergoing military training as they warned Vladimir Putin : “you’ve killed our children, now you will pay”.

Kate ­Matchyshyn, 33, had never dreamed of ­joining the Army, but now she is learning how to fire, reload and clean an AK-47.

She said: “Of course I am scared to have to train so I am capable of killing someone.

“It is a very hard thing for a woman to kill and I never thought that I would ever have to do it. But we have been forced to train for such a terrible thing by Russia.

“Russians are killing Ukrainian children so Ukrainian women will do what they have to do to protect them.

“We are the same as women anywhere in the world. All women have a protective instinct towards children and we will show that every day.

“Ukrainian women are strong — my main hobby for example is boxing — and Putin will find out just how strong. He has killed our children and so we will make him pay.”

The former massage therapist has left behind her business to join the conflict and is now just one of dozens of women receiving training at a female-run centre for veterans called Warriors House.

Before the war businesswoman Bohdana Ostapyk, 23, ran her own successful PR firm in Kyiv – now she helps co-ordinate sessions at the training centre.

She said: “The war might end in a few weeks or it might go on for years and if that is the case every single person needs to know how to use a weapon — including women.”

Although the frontline is currently some distance from Lviv, Russian troops are thought to be moving west and the women are determined to be prepared.

They use tons of material donated by factories, tear them into 2in-wide strips and then tie them on to plastic garden netting to make 40ft by 6ft nets.

But despite their new reality, the industrial operation of women have not lost their sense of humour.

Bohdana said: “We make around 30 nets in a day. This is a really difficult time for the ­country but all Ukrainians will be strong. We can be strong because we have the support of the rest of the world.