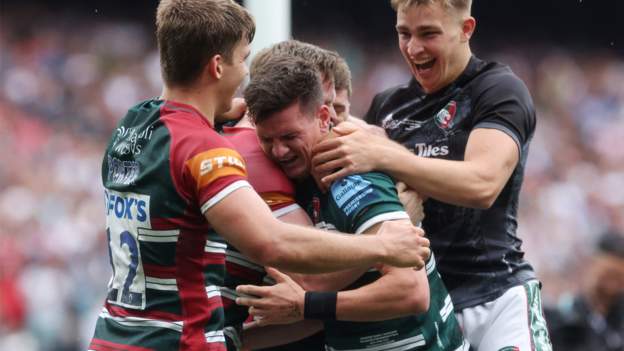 Despite losing George Ford to injury, Hanro Liebenberg and Jasper Wiese tries put Tigers 12-6 up at the break.

Owen Farrell then levelled the scores with two penalties before Burns won it.

The game appeared to be heading for extra time at Twickenham before Ford’s replacement Burns nailed his kick from 25 metres with just seconds left against a Sarries side that was finishing strongly and had a one-man advantage following Matt Scott’s sin-binning.

Glory for the East Midlands club comes at the end of a season which they dominated, having topped the table at the end of every regular-season round.

In emotional scenes at the end of the game, outgoing captain Ellis Genge – who now leaves to join Bristol – held the trophy aloft with former skipper Tom Youngs, who retired from rugby weeks before his wife Tiffany passed away this month.

Veteran scrum-half Richard Wigglesworth, who was handed a surprise start against his former club ahead of first-choice England number nine Ben Youngs, took his tally of record league appearances to 318 in a game which he finished as the oldest Premiership final winner aged 39.

An off-the-ball hit from Liebenberg allowed Farrell to tee up the game’s first points from right in front inside four minutes.

Mako Vunipola, one of Saracens’ galaxy of international stars that remained with the club despite relegation, led the north London side onto the Twickenham pitch ahead of captain Farrell on his 200th appearance for them.

The prop was typically ferocious in Saracens’ pack early on, which showcased its power and poise under pressure as a Tigers scrum collapsed just five metres out in their first real attack in the 17th minute.

Ford then missed his side’s first chance to get on the scoreboard, sending a penalty wide, before the Sale-bound fly-half’s Tigers career was ended by an ankle injury.

An Aled Davies yellow card – which Tigers argued should have been red – for a high hit on Julian Montoya minutes later handed Leicester a numerical advantage that they were quick to exploit, Liebenberg crashing over after Chris Ashton went close to crossing against his old side.

After Elliot Daly made it a one-point game with Saracens’ second penalty, the former Sarries connection of Wigglesworth and Ashton almost combined for Tigers’ second try, with the scrum-half charging down a Farrell kick which the winger collected.

While the Premiership’s all-time leading try-scorer was crowded out, a quick tap from captain Genge caught Saracens’ defence scrambling before Wigglesworth put Wiese over with a clever short-side pass.

Burns failed to hit the mark with a penalty attempt to start a draining second half, with both sides producing sensational defensive displays.

Each side came at each other in waves after the interval, but neither relented until Farrell slotted a penalty with 16 minutes remaining.

A bounding run from Andy Christie with just seven minutes left set Sarries up for a late raid. Jamie George was kept out and Farrell was repelled, only for a scrum to be earned close to the line.

Scott’s hit to stop Billy Vunipola, as the number eight tore away from the bottom of the scrum, earned him a yellow card, and Sarries the penalty for Farrell to level.

The one-man advantage was not something they were able to exploit, as Burns kicked Tigers to glory in a dramatic finish.

The tense showdown was between two sides that finished first and second in the table, and who have both regrouped and rebuilt in the past two years.

Sarries did so after the indignity of an unprecedented 105-point penalty, a £5.36m fine and relegation in 2020, which is ultimately what saved Tigers from going down to the Championship themselves.

Steve Borthwick, a Premiership winner with Sarries as a player, has overseen Leicester’s revival – taking them to a long-awaited 11th title in just his second full season in charge.

It has been a season in which they have also had to deal with their own punishment for salary cap breaches, Tigers hit with a fine of almost £310,000 for overspending in each season between 2016-17 and 2019-20.

Saracens’ highly regarded director of rugby Mark McCall has remained throughout, and previously praised the unity of staff – which includes the loyalty of some of English rugby’s biggest names, including Farrell, Maro Itoje and the Vunipola brothers – for “saving” the club.

While they were able to take Sarries back to English club rugby’s biggest day, they were unable to make history as the first side to win the Premiership title in their first season after promotion.