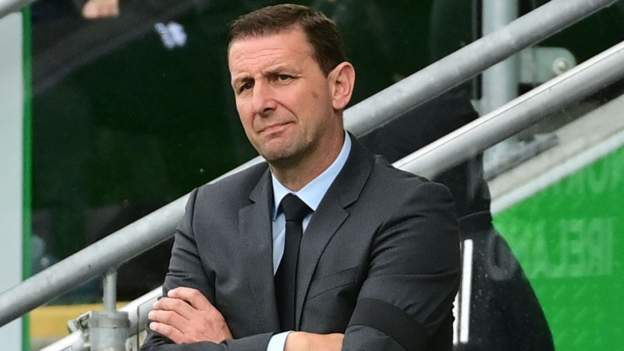 The lack of experience. The lack of cohesion. The heat. The need to rebuild. The missing players.

The list is long and there is merit to some of them, of course, the lack of experience being the most obvious. However, you can only use excuses for so long.

It also begs the question as to whether the former Under-21 boss is simply kicking the can down the road until September’s final two Nations League games, away to Greece and home to Kosovo. Injured players will likely be available, league seasons will be underway and the young players will have gained experience – so does that not unnecessarily crank up the pressure on getting results in those games?

Positivity abounded at Windsor Park on the day before the opening 1-0 loss at home to Greece, with talk of opportunities for young players and the manager setting a target of four wins from four before a quadruple-header to kick off a third-tier Nations League group for which relegated Northern Ireland were top seeds.

By tea-time on Sunday, however, Baraclough was again having to answer media questions about his future, even if he does seem confident he will remain in the role.

There were boos from supporters at half-time and full-time of the last-gasp 2-2 draw with Cyprus, while there were brief, yet loud, chants of ‘We want Bara out’ from fans in The Kop soon after the visitors went 2-0 up. There were also boos while he delivered pitch-side post-match TV interviews.

The statistics have been stacking up against Baraclough for some time. Just three wins in 20 competitive fixtures, and just one in the last 10. Still no wins in 14 Nations League games, with the current boss presiding over six defeats and four draws. And only one win at Windsor during his two-year reign.

Gauging supporters’ thoughts is never an easy task, and far from an exact science, and Baraclough’s reaction to the booing was to insist that it is just a small section, adding that the majority are behind him and understand what he is trying to do – “expose players in order to build for the future”.

It was interesting, though, that Baraclough chose not to go on to the pitch to acknowledge the Windsor crowd at full-time, instead staying at the touchline to greet players as they headed up the tunnel. Perhaps the chants of ‘cheerio’ from the travelling NI fans that met him after the 3-2 loss in Kosovo three days earlier were fresh in his mind.

One thing that was striking throughout was Baraclough’s repeated firm stance on how these games need to be used for rebuilding, and whether he was doing so safe in the knowledge that his Irish FA bosses shared his views.

Interestingly, the half-time boos would have been one of the last things IFA chief executive Patrick Nelson and president Conrad Kirkwood would have heard at Windsor on Sunday. They left the ground at half-time for a pre-arranged trip to the airport for a flight to Doha to attend the International Football Association Board’s AGM.

Nelson left behind a message that suggested he was on board with the ‘need for patience’ theme, writing in his matchday programme notes about the squad being in transition and Baraclough’s “track record of bringing young players through into the senior squad”.

Baraclough was asked post-match if he had received any assurances of that nature from his employers, and if they understand that it is a transition period.

“I think so because it is something we have sat down and discussed,” he responded. “Over a period of time, you want to see those young players coming through.

“We have a strategy that is going to develop this nation and make us stronger in the next few years. How do you do that if you don’t give these young players the experience? You won’t find out about them, and I think we have found out some really positive stuff in the last fortnight.”

Northern Ireland supporters have always been a fair bunch. Even those in the ‘Baraclough out’ camp would have to acknowledge that it’s been a particularly tough gig for him, for a number of reasons.

Without an international playing career as a base from which to start, as most NI managers have had, he is also the man that followed Michael O’Neill, an act that was always going to be difficult given the success his predecessor delivered in reaching the 2016 Euro finals.

And then there was Covid-19. His first year in charge was spent largely playing in empty grounds, meaning that an opportunity to form an immediate bond with the Green and White Army was not there. The pandemic also meant tricky triple-headers to be negotiated, with awkward friendlies often sandwiched in between qualifiers or Nations League games.

And, of course, there is the age profile of the squad and the fact he has had to blood a lot of youngsters. Some may feel he has over played this card at times, but the number of new call-ups in recent squads is testament to the strength of the field he is choosing from.

But then there are a few contradictions that have been raised during this international window in particular. He set that target of maximum points from all four games – something he stood over on Sunday – but, then, after the opening night defeat came talk of how these games need to be used for rebuilding.

He spoke of protecting young players, yet brought teenage full-back Brodie Spencer on for his debut on the opposite side to where he plays and twice asked Ciaron Brown to play out of position at left-back.

He also spoke of the taxing nature of four games in 10 days on the bodies of his players, and then proceeded to start 37-year-old Steven Davis in every match, with the Rangers midfielder having very little time on the side lines during this camp.

And so, what now? Will Baraclough’s future be up for discussion when Nelson and Kirkwood return from Doha? Or is it simply a section of fans voicing their displeasure when they should be showing patience?

Either way, Baraclough is confident he will still be in charge come September. You would imagine by then there will be no more room for excuses.