Texas shooting: During Joe Biden’s visit, Uvalde tells him to ‘do something’; he pledges ‘we will’ 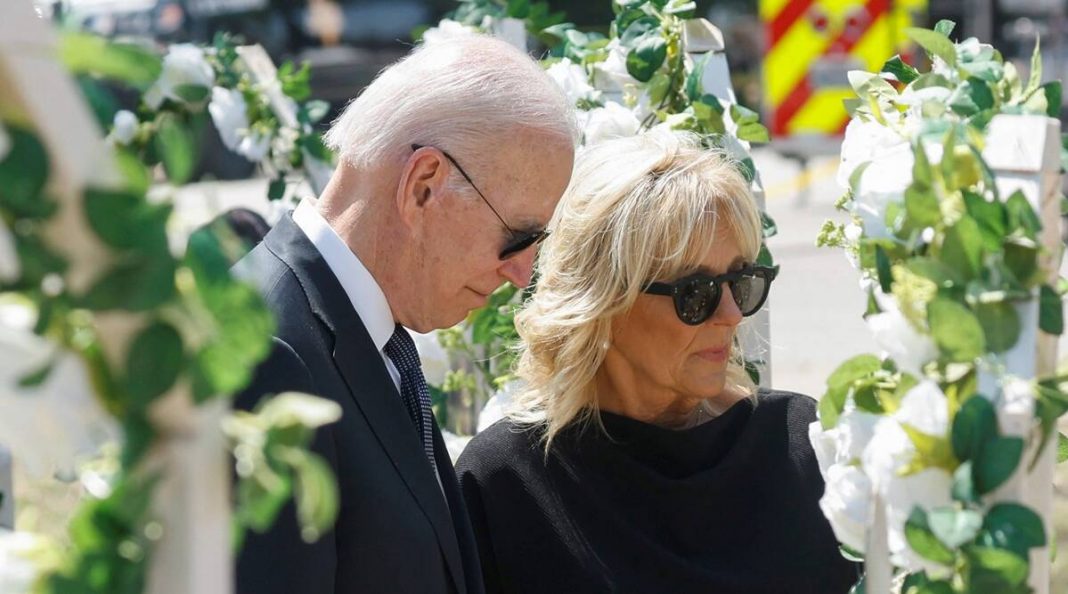 US President Joe Biden grieved with the shattered community of Uvalde on Sunday, mourning privately for three hours with anguished families of the 19 schoolchildren and two teachers killed by a gunman. Faced with chants of “do something” as he departed a church service, Biden pledged: “We will.”

At Robb Elementary School, Biden visited a memorial of 21 white crosses — one for each of those killed — and first lady Jill Biden added a bouquet of white flowers to those already placed in front of the school sign. The couple then viewed individual altars erected in memory of each student, the first lady touching the children’s photos as they moved along the row.

After visiting the memorial, Biden attended Mass at Sacred Heart Catholic Church, where several victims’ families are members, and one of the families was in attendance.

Speaking directly to the children in the congregation, Archbishop Gustavo Garcia-Siller tried to assuage the fears of the youngsters, some appearing about the same age as the victims.

“You have seen the news, you have witnessed the tears of your parents, friends,” he said, encouraging them not to be afraid of life. “You are the best reminders to us that the lives of the little ones are important.” As Biden departed church to meet privately with family members, a crowd of about 100 people began chanting “do something.” Biden answered, “We will,” as he got into his car. It was his only public comment during roughly seven hours in Uvalde.

Biden later tweeted that he grieves, prays and stands with the people of Uvalde. “And we are committed to turning this pain into action,” he said.

The visit to Uvalde was Biden’s second trip in as many weeks to console a community in loss after a mass shooting. He travelled to Buffalo, New York, on May 17 to meet with victims’ families and condemn white supremacy after a shooter espousing the racist “replacement theory” killed 10 Black people at a supermarket.

Both shootings and their aftermath put a fresh spotlight on the nation’s entrenched divisions and its inability to forge consensus on actions to reduce gun violence.

“Evil came to that elementary school classroom in Texas, to that grocery store in New York, to far too many places where innocents have died,” Biden said Saturday in a commencement address at the University of Delaware. “We have to stand stronger. We must stand stronger. We cannot outlaw tragedy, I know, but we can make America safer.” Biden also met with first responders before the trip back to his home in Delaware. It was not clear if the group included officers who were involved in the immediate response to the shooting. 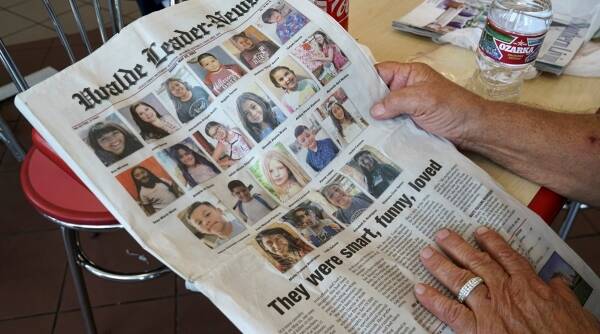 A newspaper with photos of the victims of the deadliest US school shooting in nearly a decade where a gunman killed 19 children and two teachers at Robb Elementary school, in Uvalde, Texas, US, May 29, 2022. (Reuters)

Biden visited amid mounting scrutiny of the police response. Officials revealed Friday that students and teachers repeatedly begged 911 operators for help as a police commander told more than a dozen officers to wait in a hallway. Officials said the commander believed the suspect was barricaded inside an adjoining classroom and that there was no longer an active attack.

The revelation caused more grief and raised new questions about whether lives were lost because officers did not act faster to stop the gunman, who was ultimately killed by Border Patrol tactical officers.

The Justice Department announced Sunday that it will review the law enforcement response and make its findings public.

To everyone impacted by the horrific elementary school shooting in Uvalde, Texas: We grieve with you. We pray with you. We stand with you. And we’re committed to turning this pain into action. pic.twitter.com/TIYjdmfKVP

“It’s more than mourning,” she said. “We want change. We want action. It continues to be something that happens over and over and over. A mass shooting happens. It’s on the news. People cry. Then it’s gone. Nobody cares. And then it happens again. And again.” “If there’s anything if I could tell Joe Biden, as it is, just to respect our community while he’s here, and I’m sure he will,” she added. “But we need change. We need to do something about it.” Authorities have said the shooter legally purchased two guns not long before the school attack: an AR-style rifle on May 17 and a second rifle on May 20. He had just turned 18, permitting him to buy the weapons under federal law.

Hours after the shooting, Biden delivered an impassioned plea for additional gun control legislation, asking: “When in God’s name are we going to stand up to the gun lobby? Why are we willing to live with this carnage? Why do we keep letting this happen?” Over the years, Biden has been intimately involved in the gun control movement’s most notable successes, such as the 1994 assault weapons ban, which expired in 2004, and its most troubling disappointments, including the failure to pass new legislation after the 2012 massacre at Sandy Hook Elementary School in Newtown, Connecticut.

As president, Biden has tried to address gun violence through executive orders. He faces few new options now, but executive action might be the best the president can do, given Washington’s sharp divisions on gun control legislation.

In Congress, a bipartisan group of senators talked over the weekend to see if they could reach even a modest compromise on gun safety legislation after a decade of mostly failed efforts.

“Let us also pray to use the will and courage God gives each of us to act united with common sense to protect our children” https://t.co/nrsIJDMlxO pic.twitter.com/xoVxGHKUkb

Encouraging state “red flag” laws to keep guns away from those with mental health issues, and addressing school security and mental health resources were on the table, said Sen. Chris Murphy, who is leading the effort.

While there is nowhere near enough support from Republicans in Congress for broader gun safety proposals popular with the public, including a new assault weapons ban or universal background checks on gun purchases, Murphy, D-Conn., told ABC’s This Week that these other ideas are “not insignificant.” The group will meet again this coming week under a 10-day deadline to strike a deal.

“There are more Republicans interested in talking about finding a path forward this time than I have ever seen since Sandy Hook,” said Murphy who represented the Newtown area as a congressman at the time of the Sandy Hook shooting. “And while, in the end, I may end up being heartbroken, I am at the table in a more significant way right now with Republicans and Democrats than ever before.”