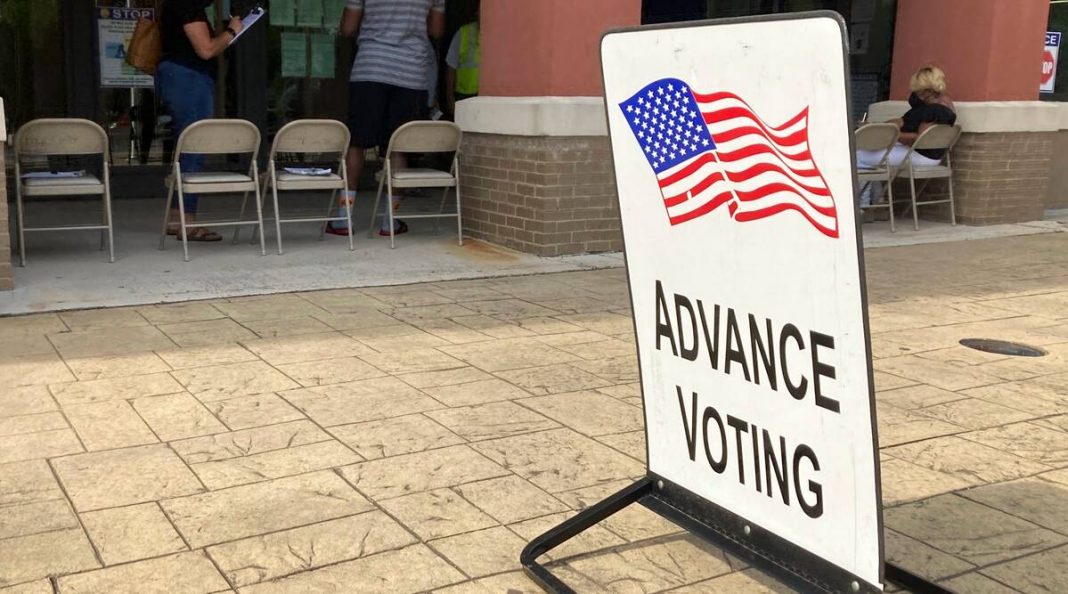 Georgia takes centre stage in Tuesday’s primary elections as Gov. Brian Kemp and Secretary of State Brad Raffensperger try to fight back challengers endorsed by former President Donald Trump, who is seeking revenge for his 2020 election defeat in the state.

US Rep. Marjorie Taylor Greene of Georgia is testing Republican voters’ tolerance for controversy in her primary. On the Democratic side, US Rep. Lucy McBath and US Rep. Carolyn Bourdeaux are facing off after McBath switched districts because of redistricting.

In Alabama, three Republicans are in a tight race for the nomination to replace retiring US Sen. Richard Shelby. In Arkansas, former White House press secretary Sarah Sanders is a front-runner for the Republican nomination for governor.

In Texas, two runoffs are drawing outsized attention: Attorney General Ken Paxton is trying to hold off Land Commissioner George P Bush, while Rep. Henry Cuellar is trying to fend off his progressive challenger in a rematch from 2020.

What to watch in Tuesday’s primaries in Georgia, Alabama, Arkansas, Texas and Minnesota:

Trump’s desire for vengeance has fueled the primary challenges to Kemp and Raffensperger, both of whom defied his pressure to overturn Georgia’s 2020 presidential election results. Trump recruited former US Sen. David Perdue to take on Kemp for the Republican gubernatorial nomination, but Perdue has lagged in polls and fundraising. Kemp has been increasingly confident the GOP will send him forward to a November rematch with Stacey Abrams, who is unopposed for the Democratic nomination.

Raffensperger, the state’s top elections official, is facing a tough challenge from US Rep. Jody Hice, who has promoted Trump’s lies that widespread voter fraud or tampering cost him the 2020 election. Trump’s candidate for US Senate, football legend Herschel Walker, appears to be cruising to the Republican nomination despite some GOP leaders warning that Walker will be unelectable in November against Democratic incumbent Raphael Warnock. Walker has been accused of threatening his ex-wife’s life, exaggerating his business record and lying about graduating from the University of Georgia.

Greene, a political lightning rod, is trying to stave off multiple Republican challengers. The Trump-backed firebrand was stripped of her committee assignments last year over racist remarks, her embrace of conspiracy theories and a past endorsement of violence. A group of voters tried but failed to knock her off the ballot, accusing her of helping foment the January 6 insurrection at the US Capitol.

In the Atlanta area, an unfavourable new district led Rep. McBath to jump into a Democratic primary against fellow Rep. Bourdeaux. McBath said her push to stay in Congress was about fighting for gun safety on behalf of her son Jordan, who was killed in a shooting 10 years ago.

Shelby’s retirement launched a heated and expensive primary for the GOP nomination for the seat. US Rep. Mo Brooks faces Katie Britt, the former leader of the Business Council of Alabama and Shelby’s former chief of staff, and businessman Mike Durant, best known as the helicopter pilot shot down and held captive in the events chronicled in ‘Black Hawk Down.’ Trump initially endorsed Brooks last year but withdrew the endorsement in March after their relationship soured. Trump has not made another endorsement in the race.

The fractured field increases the chances the race will go to a June 21 runoff. Republican Gov. Kay Ivey is attempting to avoid a runoff as she faces several challengers from her right flank. Lindy Blanchard, who was Trump’s ambassador to Slovenia, and businessman Tim James have criticised Ivey’s support of a gas tax increase and her handling of the Covid-19 pandemic that included a temporary mask mandate and appeals for people to get vaccinated. They also criticised Ivey over a charter school that welcomed LGBTQ students.

Ivey has emphasised her conservative record, including signing legislation — now blocked by the courts — to make abortion a felony at any stage of pregnancy. In one campaign commercial, the governor pulls a handgun out of her purse to note her support of permitless concealed carry.

In Arkansas, two-term US Sen. John Boozman hopes to fend off a challenge from three Republican rivals in a race in which he’s had to rely on his endorsement from Trump as well as the state’s top GOP figures. The mild-mannered Boozman has taken a more aggressive tone in his campaign ads, vowing to complete the wall along the US-Mexico border. Boozman’s rivals include former NFL player Jake Bequette, who has the support of a super PAC that’s aired ads attacking Boozman as not conservative enough, and Jan Morgan, a conservative activist and former TV reporter.

Five Democrats are seeking the party’s nomination for governor, with nuclear engineer and ordained minister Chris Jones the front-runner. The candidates are running to succeed Republican Gov. Asa Hutchinson, who is barred by term limits from seeking reelection.

Texas held the first primary of 2022 back in March, but runoffs will finally settle two major races. One puts the Bush family dynasty on the line: Republican George P Bush, a son of former Florida Gov. Jeb Bush, has spent the past year mounting a primary challenge to Paxton, the two-term attorney general. George P Bush is the last of his family still in public office and finished 20 percentage points behind Paxton in a four-way primary. Since then, Bush’s efforts to close the gap have centred on emphasising Paxton’s legal troubles, including an ongoing FBI investigation into corruption accusations and a separate 2015 indictment on securities fraud charges. Paxton, who has denied wrongdoing, has broad party support and Trump’s endorsement.

On the Democratic side, Rep. Cuellar’s bid for a 10th term has run head-on into a reenergised national battle over abortion rights. His position as one of the last anti-abortion Democrats in Congress has become a central issue in his runoff against Jessica Cisneros, a 28-year-old immigration attorney and abortion rights supporter. Democratic House leaders have lined up behind Cuellar. Cisneros trailed Cuellar by roughly 1,000 votes in March, but Cuellar didn’t hit the 50% threshold to avoid a runoff.

A primary Tuesday in southern Minnesota’s 1st Congressional District is a first step for replacing Republican US Rep. Jim Hagedorn, who died of cancer in February. A special general election to fill the rest of Hagedorn’s term in the Republican-leaning district is scheduled for August 9. Hagedorn’s widow, Jennifer Carnahan, has been making the most overt appeals to Trump’s supporters. She was state chair of the Republican Party of Minnesota until being forced out last August after a prominent donor was indicted on sex trafficking charges.

State Rep. Jeremy Munson, a founder of a hard-right faction that broke from the main Minnesota House GOP Caucus, has been endorsed by US Sens. Ted Cruz of Texas and Rand Paul of Kentucky.

Former state Rep. Brad Finstad has the backing of several Minnesota GOP officeholders. He has reminded voters he was Trump’s Minnesota director for USDA Rural Development. On the Democratic side, the candidate endorsed at the party’s district convention earlier this month is former Hormel Foods CEO Jeffrey Ettinger. His opponents include University of Minnesota law professor Richard Painter, a former White House ethics lawyer for President George W. Bush.