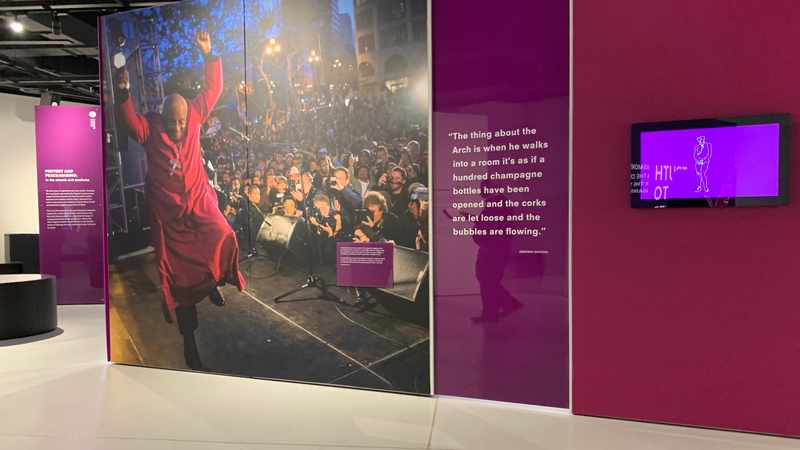 Johannesburg – Those who implore us to “stop living in the past” and “move on” will find it almost impossible to pervert our history for as long as the Apartheid Museum stands.

The museum recently re-opened after it had closed its doors to comply with Covid-19 lockdown restrictions.

What is heartening is that among the many who visit are busloads of schoolchildren from all over the country. It is arguably the only place where they will learn, from a credible source, about the beginning and the end of apartheid, declared a crime against humanity by the United Nations.

On a guided tour that lasts just under two hours, visitors, many of whom include foreign tourists, get to hear everything about the heresy – those who enforced it and those who died opposing it.

The latest addition to the museum is the new temporary exhibition titled “Truth To Power, Desmond Tutu & The Churches In The Struggle Against Apartheid”.

Typical of a museum that aims to be taken seriously on the subject it was set up to curate, there are no shortcuts. It is difficult to find fault, even for a sworn critic.

It comprises everything one ever needed to know about the late Archbishop Emeritus, born on October 7, 1931, died on December 26, 2021, who lived for one ideal only – to be a thorn in the side of the apartheid regime. Having started out their professional lives as teachers, Tutu and his wife Leah both quit the profession – the Arch joining the church and his wife taking up social work.

“Tutu did not act alone. The churches became a powerful force in the struggle against apartheid and in the quest for a better society. This exhibition charts their journey,” the visitor is assured.

It proved to be a drawcard and is still standing today!

Truth To Power is housed in the George Bizos Gallery. Bizos, an indefatigable crusader against apartheid all his life since turning up on these shores as a child from his native Greece, was a friend of the museum in his life.

Scholars will find the museum as attractive as a toyshop is to a child. There are quotes galore, almost every poignant word Tutu and Mandela have ever uttered.

Of course the wing dedicated to Mandela is an institution on its own. It is just a pity that photographs are not allowed [to be taken] otherwise one can only imagine how many visitors would die to pose next to the red Mercedes-Benz 500 SE, registration 999 NRM GP, that was specially built for Madiba by workers at the East London plant.

The car was handed to a newly-released Mandela at the Sisa Dukashe Stadium in Mdantsane.

Perhaps one would fare better to know exactly which period under apartheid one is interested in, as the museum is a maze on the subject – from its inception in 1948, leading up to its demise in 1994.

The photography of Ernest Cole, the Pretoria-born man forced into exile by the hardships of life under apartheid, are a marvel to behold.

But bring lots of tissues for the segment of the museum dedicated to the gallows, and those, such as Solomon Mahlangu and Andrew Zondo, who were sentenced to death.

There is a mural dedicated to every soul that went past the hangman. The same for those such as Steve Bantu Biko, Ahmed Timol, Neil Aggett, et al, who died in detention.

There are walls dedicated to information such as the number of people who were officially reclassified by race. It is a tragicomedy. Three Chinese became white, 249 blacks became coloured, one black was classified Griqua, 11 coloured became Chinese and, the joke of it all, “No blacks became white and no whites became black”.

This is what the apartheid government got busy with to elevate whiteness!

The volatile 1980s are captured in all their gore, blood, sweat and tears.

Think of a name that ever raised its voice against apartheid, and you will find it at the museum.