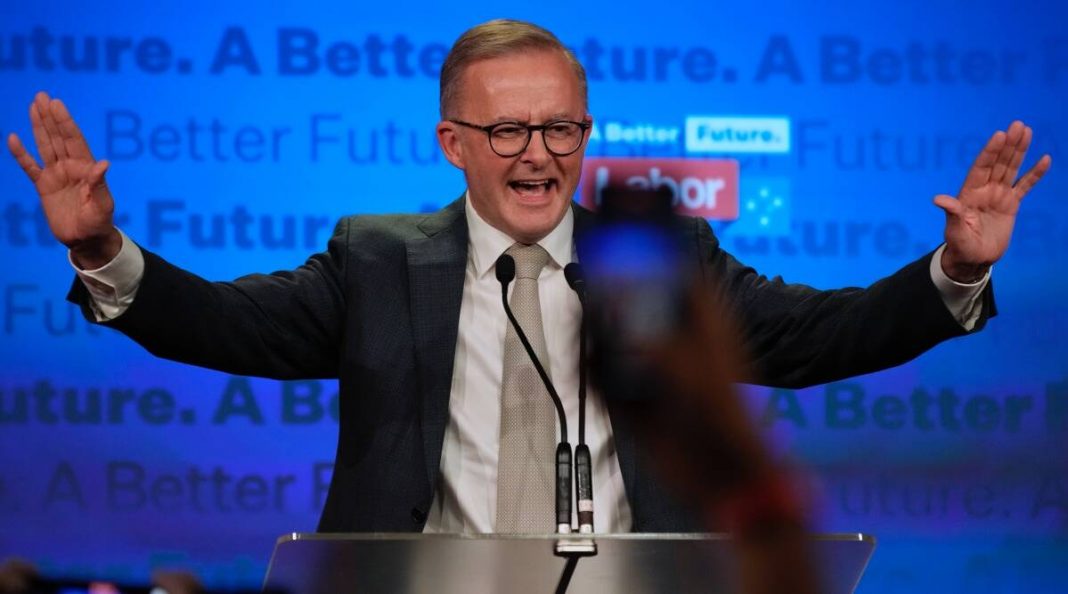 At a popular bar in the heart of Melbourne back in 2016, a slightly chubby middle-aged man stood behind a turntable leading the crowd in a sing-a-long to Iggy Pop’s “The Passenger.”

“It’s a good thing to have fun — as well as fight Tories,” he yelled to the crowd, which responded with applause and chants of “Albo, Albo, Albo.”

Six years later, the scarf, t-shirt and beer gut are gone, replaced with a suit, tie and stylish tortoiseshell glasses. And he’s about to be sworn in as Australia’s 31st prime minister.

For Anthony Albanese, 59, the personal transformation came after he was in a head-on collision with another vehicle near his home in the Sydney suburbs in January 2021, a crash that almost cost him his life.

“I was one foot either way from checking out, and I was very lucky,” he told The Monthly magazine in Australia earlier this year. “That does a few things for you.”

He changed his look entirely, prompting incumbent Scott Morrison to accuse him of trying to be “someone else” on the campaign trail. But Albanese — who was raised by a single mother in public housing — insisted he had simply decided to get healthy. “That’s a good thing,” he said.

At the same time, he shifted the Labor Party’s political strategy, paving the way for an election win on Saturday that ousted Morrison’s conservatives after nine years in power. Three years ago, Albanese took over a disheartened and frustrated party after Labor’s shock election loss. He then deliberately avoided criticism of the government’s pandemic strategy, and instead worked with Morrison at the height of the Covid-19 outbreak.

But he pivoted from that approach ahead of the election. Instead of targeting radical change, as Labor did unsuccessfully in 2019, Albanese instead focused on delivering concrete gains for voters on bread-and-butter issues — and repeatedly hammered Morrison for his government’s failings.

“I hope there are families in public housing watching this tonight,” Albanese said in his victory speech on Saturday night. “Because I want every parent to be able to tell their child no matter where you live or where you come from, in Australia the doors of opportunity are open to us all.”

Albanese will take the reins of an economy where cost of living and interest rates have risen at a faster clip than real wages amid a ballooning fiscal deficit and high national debt. Whether he governs with a majority of parliament or not, he will have to work with a crossbench of lawmakers made up of the Greens and pro-climate independents who want to see more significant cuts in emissions and concrete plans to move away from fossil fuels.

Albanese is one of the first prime ministers in decades to have a working-class upbringing. He regularly says he was bred to love three things from the moment he was born: The Catholic Church, the South Sydney Rabbitohs rugby league team and the Labor Party. He developed a lifelong love of music, politics and sports, and even has a beer named after him — the Albo Corn Ale.

Speaking in Melbourne on the last day of the campaign, Albanese teared up while paying tribute to his mother, saying the fact he was a candidate for prime minister spoke to her “courage.”

“The very humble beginnings to his life have really shaped him in terms of his values, and approach to life and to governing,” said Nicholas Reece, a former senior adviser to former Labor Prime Minister Julia Gillard and a principal fellow at the University of Melbourne.

Still, Reece said despite his hard-left background and his working class roots, Albanese wouldn’t be a “radical or revolutionary” leader.
“He will be a reforming prime minister, he will be a sensible prime minister and he will be a prime minister who understands the very important role that government plays in the betterment of people’s lives,” the former Labor adviser said.

Albanese joined the Labor Party soon after he started university and quickly became a prominent power broker in the party’s left-wing faction. He won a seat in the federal Parliament, standing for the working class neighborhood where he grew up, and at the age of 33 he was sworn in as the member of Grayndler in 1996.

As a powerful factional warrior for Labor’s left, Albanese is regarded as a shrewd political player by his opponents and those within his party. Just as his decades-long political career made him many enemies, Albanese also accumulated a number of close allies within the senior Labor leadership — including Penny Wong, who is set to become foreign minister.

In parliament, Albanese developed a reputation as one of Labor’s “attack dogs” — members who are directed to tear down the other side, allowing their party leaders to look more positive and stately. He embraced the role and kept it when Labor took power in 2007 after a long 11 years in opposition under then-Prime Minister John Howard.

In an interview with local media during the campaign, Howard described Albanese as a “left-wing inner-city bomb thrower.” Albanese said that characterization left him “untroubled.”

Albanese also had a front-row seat to chaotic intra-party squabbling between Gillard and former Prime Minister Kevin Rudd, which set off a decade of leadership changes at the top of Australian politics. Albanese was one of the few politicians who remained trusted by both sides throughout the power struggles.

As the leader of the House during Gillard’s minority government, Albanese developed a reputation for being a skilled negotiator, something which could assist him after the 2022 election. He’s worked with independents and minor parties to organize the passage of major reforms including a national price on carbon and the National Disability Insurance Scheme.

“He’s learned unity — the whole party has learned if you go down the road of disunity or short-term decisions, you end up in a bad place,” said Michelle Grattan, a professorial fellow at the University of Canberra who has written about the country’s politics for decades. “He will be reasonably cautious,” she added. “I think he will depend quite a lot on the team.”

On the campaign trail, Albanese was far more understated than Morrison, who would constantly be looking to shake hands, make roti or look for a ball or a tool or something he could pick up while taking a photo.

Albanese, by contrast, looked slightly awkward when meeting the public. He would instead gravitate to babies and dogs. During his 2016 set at Melbourne’s Corner Hotel, he dedicated one of the songs to his pooch, Toto.

During the campaign, Albanese would light up at the mention of nation-building projects and will happily list off his achievements in the area. He was, after all, Australia’s infrastructure minister for six years, through two changes of prime minister and multiple cabinet shuffles.

Yet while his election strategy worked, Albanese personally had a rough campaign. He stumbled over economic figures and policy details in a ways that some Labor officials thought would be fatal. And despite the win, Labor only secured about 33% of the primary vote so far — on pace for its worst result in decades and the lowest for any incoming government since World War II.

But that didn’t faze Albanese on election night. Dressed in a suit, he said he’s “been underestimated my whole life” while outlining an optimistic vision for an Australia that empowers women, takes climate change seriously and looks out for working families at a time when inflation is the highest in decades.

“I am here not to occupy the space, but to make a positive difference each and every day,” he added.

Beneath his new buttoned-down exterior, occasionally a glimpse emerges of the old Albanese. During an event to kick off the six-week campaign in April, he stayed true to his working-class rocker roots.