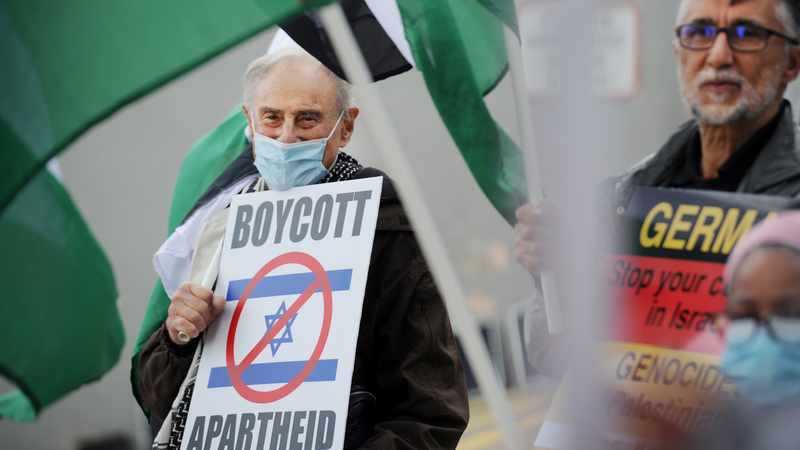 Israel’s drums of war beat incessantly against the Palestinian people. It is a war waged daily against us for nearly three-quarters of a century. Last week, Palestinians marked the 74th anniversary of the Nakba – the catastrophic founding of the state of Israel in historic Palestine in 1948.

More than 500 Palestinian villages were destroyed and depopulated; more than 10 000 Palestinians were killed, and at least 750 000 more were expelled. It was the start of a bloody war of dispossession, displacement, and denial of rights that continues to this day.

It is a war that Palestinians endure from the moment we are born, in every aspect of our lives, and even after we die – as the world witnessed when Israeli police attacked pallbearers at the funeral of journalist Shireen Abu Akleh last Friday.

On Monday, Israeli forces fired tear gas canisters and shot rubber-coated bullets at mourners at the funeral of 21-year old Walid Al-Sharif, who died from his wounds after Israeli soldiers shot him last month while attacking worshippers at Al-Aqsa Mosque. The scenes from Abu Akleh’s funeral were “chillingly reminiscent” of South African apartheid forces and the brutality meted out to mourners at the funerals of anti-apartheid activists during South Africa’s liberation Struggle, observed the Desmond Tutu Foundation.

Israel’s allies across the world, including in South Africa, may not be ready to use the word, but apartheid is – and has been, for decades – the everyday reality of Palestinians. Israel applies different laws for Israeli settlers and Palestinians under occupation.

The laws explicitly privilege those who are illegally on our land and discriminate against lawful inhabitants. That is settler colonialism—and apartheid.

Israel proclaims a Jewish person’s automatic right of return but is outraged when Palestinians claim our right to return to the land we were uprooted from 74 years ago and to homes that we still have the key to. It does not see the irony of that outrage and its denial of our right to return.

Why? Apartheid. Israel’s zoning and planning policies confine Palestinians to specific areas of our land and grant unlimited expansion to Israeli settlers. This is maximum Palestinian geography with minimum Palestinian demography. This is textbook apartheid.

In the Gaza Strip, two million Palestinians have endured 15 years of blockade and one aggression after another that targets all and spares none. Israel justifies its crimes by claiming its right to security.

Where is the Palestinian right to safety and security from Israeli violence? Israeli laws and courts have ensured impunity for Israeli settlers and occupation forces while criminalising the presence of Palestinians in our land and our legitimate struggle for freedom.

Why? Apartheid. Instead of being outraged by the word “apartheid” being applied to Israel, Israel’s allies should be outraged by the policy. As we prepare to celebrate Africa Day on Wednesday and commemorate the founding of the Organisation of African Unity (OAU) 57 years ago, we must acknowledge that Palestinian resistance and struggle is largely inspired by Africa’s liberation and anti-colonial struggles.

Palestine’s liberation from Israeli occupation and colonialism was consistently high on the agenda of the OAU. In 2002, as the OAU stood on the threshold of being reborn as the African Union (AU), president Yasser Arafat stood besieged by Israeli troops in Ramallah.

Arafat sent his envoy, Farouq Kaddoumi, to attend the final OAU meeting in Durban. Through Kaddoumi, Arafat appealed to African leaders for the AU to continue supporting and advocating for Palestinian freedom.

This, then, makes Israel’s recent accreditation to the AU even more unacceptable. It is unthinkable that some AU member states – which themselves have emerged from painful histories of colonialism and occupation – openly support the presence of a modern-day colonial power such as Israel at the AU.

If Israel’s accreditation is retained, then the AU, an institution that serves as an anti-colonial beacon to the world, will follow the example of much of the international community’s inaction when it comes to Israel.

In the past three months, however, the world has shown that it can act; that it can translate condemnations and words into action. We have seen how boycott, divestment, and sanctions are appropriate responses to a belligerent regime and violator of international law.

Acting against an occupier is not complicated or controversial. If the world has been moved to sympathise and act immediately against Ukraine’s invaders, why then has it failed to do so against Palestine’s occupiers for almost 75 years?

Israel has been able to sustain its illegal occupation of Palestine and its apartheid policies against the Palestinian people only because of the world’s inaction. It is now time to act against Israel.

* Jarrar is the Palestinian Ambassador to South Africa, Namibia, Lesotho and Malawi