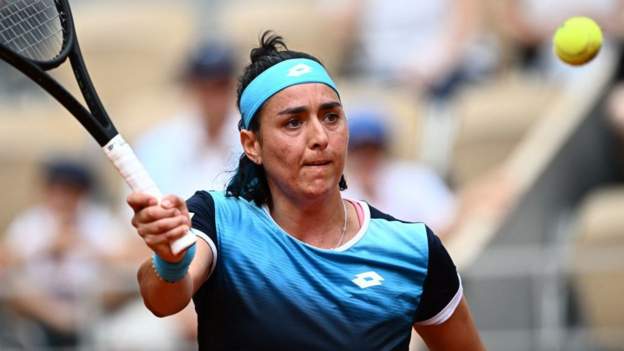 Sixth seed Ons Jabeur suffered a surprise first-round defeat by Magda Linette on the opening day of the French Open.

Jabeur was among the favourites for the title, having reached three clay-court finals in the build-up to Paris.

However, it was Linette, 30, who held her nerve better on the big points to secure a fine victory.

Linette will face either Britain’s Harriet Dart or Martina Trevisan of Italy next.

Jabeur, 27, had won 17 clay-court matches in the weeks before the French Open and became the first African to win a WTA 1,000 event at the Madrid Open earlier this month.

She is a player known for reacting well under pressure, but cut a frustrated figure as the match progressed.

The two traded breaks in the opening set and Linette faltered when serving at 5-3 down to hand Jabeur the opener.

The Pole left court for treatment on her right thigh, which was heavily strapped, and struggled with her movement at the back of the court.

However, Jabeur missed four break-point chances in the second set and looked the less confident of the two as Linette forced a decider.

A tough final set saw both players break, with Jabeur having to dig deep to save two break points at 4-4, but Linette kept the pressure on.

Serving to stay in the match, the Tunisian squandered a 40-0 lead and double-faulted to hand Linette match point.

Linette converted it and raised her arms in triumph as she notched the third top-10 win of her career.

Earlier, 2018 runner-up Sloane Stephens claimed her first victory since March as she fought back to beat German qualifier Jule Niemeier.

Former champion Garbine Muguruza and 2021 US Open runner-up Leylah Fernandez are among the other players in action on Sunday.