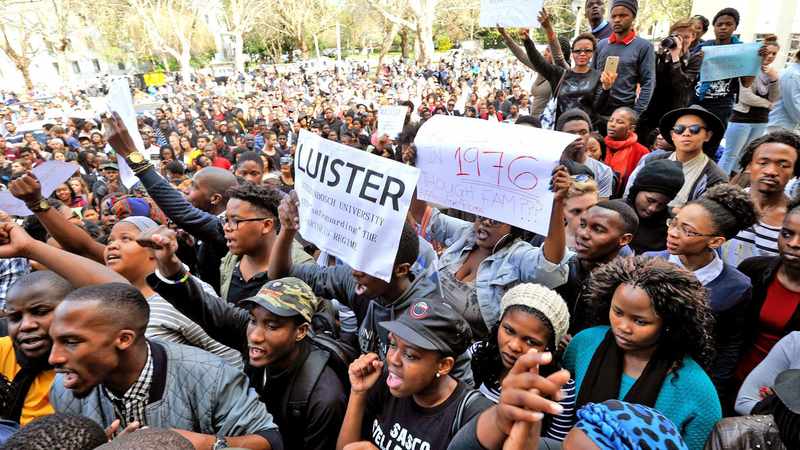 Johannesburg – The depiction of various racially charged incidents in the media may betray a willingness to use language that, for a number of reasons, avoids calling a spade a spade.

The recent widely reported incident by the white Stellenbosch University student, Theuns du Toit, who broke into the Huis Marais residence dorm room and urinated on the study material and laptop of a fellow black student, Babalo Ndwanyana, who has since laid charges of housebreaking, crimen injuria (impairment of dignity) and housebreaking, has depicted a reticence on the part of the mainstream media to label the action of the Stellenbosch Widdler, bluntly as an act of racism.

Mainstream media, including television in South Africa has the tendency to be euphemistic in its reportage on matters of racial discrimination, mainly of whites against blacks.

More recently in fact, in July last year during the widespread looting and rioting mainly in KwaZulu Natal and Gauteng, Indian residents of Phoenix butchered black Africans in the name of protecting their properties from looters and many reports never referred to the incident as a “Phoenix Massacre”. This, while many people who were found dead with gunshot wounds were not looters – arguing that they didn’t want to inflame the situation.

The same media has never been shy to label attacks on criminals who are foreigners, as xenophobia or Afrobophia and stirring up emotions and hatred just because the alleged perpetrators are black Africans.

The Stellenbosch Widdler, who is currently suspended from the university and faces the possibility of expulsion, in some reports has been reported as “the Stellies Urinator” instead of, for instance, “The Racist Urinator” given the historical black-white racial divide in South Africa.

In earlier, more volatile times ahead of the advent of democracy in 1994, reports in 1993, on Polish immigrant Janusz Waluś who murdered SACP and ANC leader Chris Hani, have largely reported on him as “Hani’s killer”. Never as a racist “Hani killer”.

The 1988 Pretoria mass shooting when Barend Strijdom known as the Wit Wolf (White Wolf) on November 15 of that year, on Strijdom Square (renamed Lilian Ngoyi Square) went on a shooting spree, and killed eight innocent people, seven of them African and one Indian, is a reminder of how far the people of South Africa have come, in terms of dealing with racial tensions.

Professor Admire Mare, Associate Professor in the Department of Communication and Media at the University of Johannesburg, said passive reporting is a strategic approach used by journalists to tone down on issues considered to be controversial.

“This is particularly evident when dealing with racism, classism, ethnicity, gender, and xenophobia. It serves the purpose of hiding the racial, ethnicity, nationality, gender and class of the perpetrator or the victim.

“It is meant to protect a certain social group and not to present them as racists, tribalists, xenophobic or even ageists.”

Mare said it promotes subtle racism, classism, ageism, xenophobia and other isms that are unpalatable in contemporary societies.

Language is a weapon, conceded Mare, that is used by the media to build, malign, destroy, build bridges and communicate meaning.

“However, the strategic use of certain terms is meant to hide, rather than to reveal, deep-seated racism. In the context of the Buffalo Shooting, it was clear that the media sought to continue with societal stereotypes of blacks as gangsters and criminals while presenting whites as ‘gunmen’ or people acting in self-defence against a marauding violence-inclined racial group.”

He believes such tropes have been normalised in the reportage of controversial issues not only in the global North but also the global South. Language can serve the purpose of exonerating the perpetrator, while re-traumatising the victims.

He’s found that the media often tries to play it safe when handling race-related issues. This makes sense within the context of conflict-sensitive reporting, because language can unite but also can divide.

“We are increasingly seeing journalists and sub-editors using carefully chosen euphemisms, tropes, metaphors and adjectives when reporting on racial issues in South Africa and beyond. There is evidence that journalists are trying by all means not to generalise racism as a white people issue but understanding its various manifestations.”

Mare reiterated that while it is important to call a terrorist by his or her correct name, it is also important to strike a balance between escalating hate speech or even promoting reverse racism.

“However, it is important that journalists name and shame racists, xenophobes, tribalists or so forth without fear or favour. The culture of racism seems to be amplified through this tendency to use politically correct terms. In most cases, these terms are used so that the media house does not offend their advertisers, readers and funders. The media doesn’t want to bite the hand that pays the bills.”

According to Mare, a proactive approach to reporting racism should focus on unpacking the structural and foundational drivers, manifestations, and enablers of racism in South Africa.

“It is about highlighting the impact of racism on racial relations and life chances of black South Africans. Once the context is laid bare, it becomes easier for journalists to link the episodic manifestations of racism online and offline to deep-seated structural issues.”

The Head of Performing Arts at the University of KwaZulu-Natal, Professor Sihawukele Ngubane says the use of euphemisms by media promotes African culture and social cohesion.

“South Africa has diverse cultures and they are equal in their status. African society respects each other’s cultures and we must learn to accept each other. Calling a terrorist a terrorist is always reserved for justice, although one can refer to a terrorist act but not label a person as one,” said Ngubane.