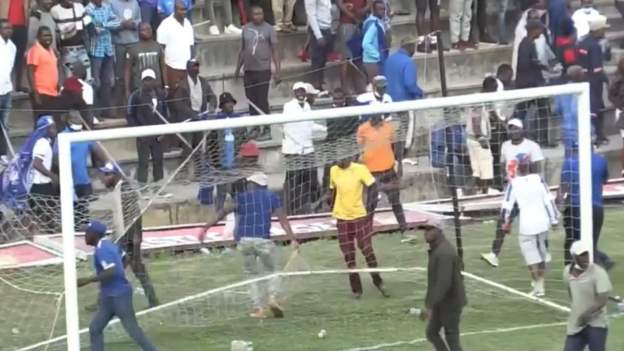 Zimbabwe’s Premier Soccer League (PSL) has suspended all matches until further notice following pitch invasions, violence and vandalism at a game between Highlanders and Dynamos on Sunday.

The biggest fixture in Zimbabwean football was abandoned as the scenes at Barbourfields Stadium in Bulawayo included a supporter attacking a referee, perimeter fences being pushed over and the net of one of the goals being torn by Dynamos fans, who also vandalised the posts.

The incidents were sparked after Highlanders went 1-0 up in second-half injury time, with Dynamos protesting about a challenge on their goalkeeper.

The PSL’s decision means Zimbabwe has a suspension of both domestic top-flight action as well as international football, with the country also under a Fifa ban.

Football’s world governing body suspended Zimbabwe in February for government interference in the running of the game in the country.

The Warriors are set to be excluded from qualifiers for the 2023 Africa Cup of Nations unless they get that sanction lifted two weeks before their first group fixture, which is against Liberia on 9 June.

The match between Highlanders and Dynamos was the second fixture this season to be abandoned, with a contest between FC Platinum and Highlanders called off in April.

On that occasion, tear gas was fired by police after Highlanders fans invaded the pitch following a disputed penalty decision.

The PSL says it will meet with the Zimbabwe Republic Police, club security officers, marshals and stadium owners on Friday.

“We take this opportunity to apologise to all football loving fans, our sponsors and stakeholders. We hope to address these challenges before resuming football matches,” said PSL chief executive Kenny Ndebele.

However, there has been an outcry from supporters and clubs, who feel the PSL’s decision to suspend the league is too harsh.

“Why not suspend the culprits or make them play behind closed doors? Suspending the entire league will disadvantage some peace-loving fans and organised teams,” said PSL side Herentals Football Club on Twitter.

Bulawayo Chiefs secretary-general Dumisani Mantula Sibanda told BBC Sport Africa that they “will choose to accept the decisions made by our governing bodies in their endeavours to make the best of our football”.

“We can only hope for the best and a favourable outcome,” he added.

Meanwhile, the Zimbabwe Football Association (Zifa) says it will investigate the incident.

“It is also imperative to identify the roots of the hooliganism so that we find a lasting solution,” a Zifa statement said.