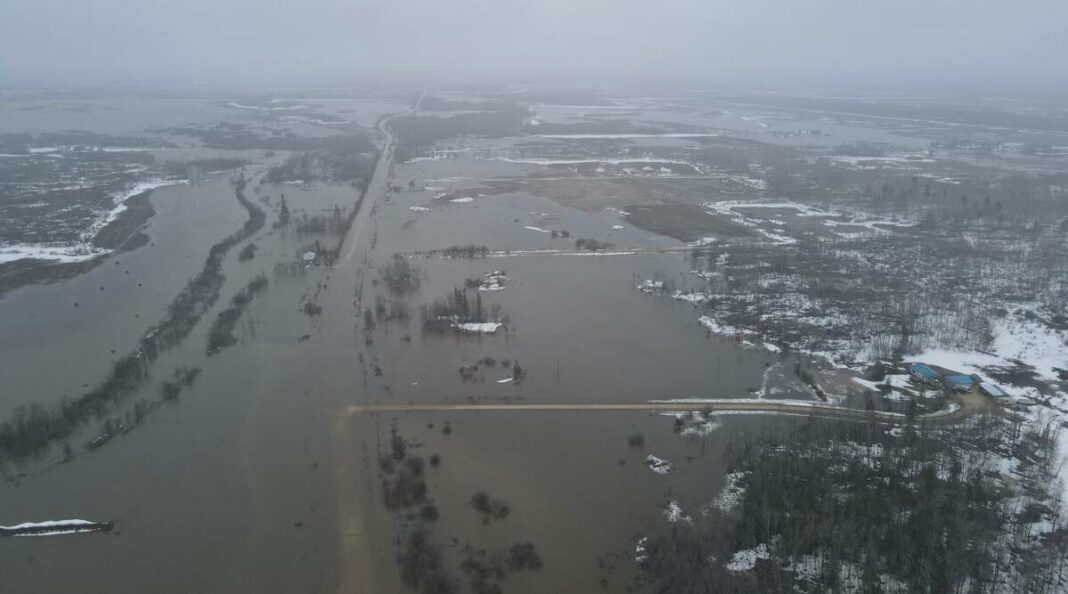 All 4,000 people in the Northwest Territories town of Hay River were ordered to evacuate as floodwaters reached the community’s downtown area.

Chief April Martel of the Katl’odeeche First Nation on Wednesday ordered her entire community to leave and head south toward the town of Enterprise as parts of western Canada struggle with some of the worst flooding in decades.

The city of Yellowknife opened an evacuation center for people leaving Hay River in search of safety, and in Fort Providence the Big River gas station assisted evacuees through the night. Other people seemed to be heading for northern Alberta.

“Some had very little warning and had to react quickly to stay safe, while leaving their home, their possessions and, for some, their business to endure the water and ice,” Northwest Territories Premier Caroline Cochrane and Municipal Affairs Minister Shane Thompson said in a statement Thursday.

The local Department of Infrastructure closed as impassable the only road to Hay River’s Vale Island, where the local airport is located.

Residents wade through waist-deep waters to salvage what they could from properties in Hay River, Northwest Territories, amid an evacuation order prompted by serious flooding: https://t.co/XwnKbUVLLL #HayRiver #HayRiverflood

Earlier Wednesday, a section of ice broke away, sending a fresh surge of water toward the town and the downtown was covered in a foot or more of water within minutes. Some residents reported being rescued from their homes by boat.

The town is at the mouth of the Hay River where it flows into the Great Slave Lake and it’s essentially a miniature delta through which multiple river channels run.

Ice jamming those channels had blocked water and a weekend of rain and snow in the river’s basin added more and more water into that system.

“There was a large volume of ice, a large volume of snow in the basin over winter, and then this storm hit — initially as rain, which then flowed directly into streams and creeks, bumping up the water level immediately — and it parked over the entire basin,” territorial hydrologist Shawne Kokelj said this week. “Now what we’re seeing is there’s still high water coming from farther upstream because a lot of rain fell there, too, and now some of the snow is melting and so keeps feeding a lot of these smaller streams.”

Justin Gaudet of the Paddle Prairie Mtis Settlement, where about 800 people live, said a local emergency alert was issued Sunday after rain and snowmelt raised water levels on six nearby rivers to heights that elders in the community last saw more than 50 years ago.

Gaudet said the water level had lowered, but moisture and contaminated water posed the threat of mold damage, and he said some bridges were damaged.

“Without the bridges, people can’t leave their homes,” he said.

The Dene Tha’ First Nation at Chateh, about 845 kilometres northwest of Edmonton, and the Little Red River Cree have been under local emergency alerts due to flooding since the weekend.

The mayor of High Level said this week that some evacuees living in the town’s arena and hotels were running out of food.

“It’s a huge influx of people for our small community,” said Crystal McAteer.

In the province of Manitoba there are 28 municipalities and four First Nation communities that have declared states of emergency, with 2,500 people out of their homes.