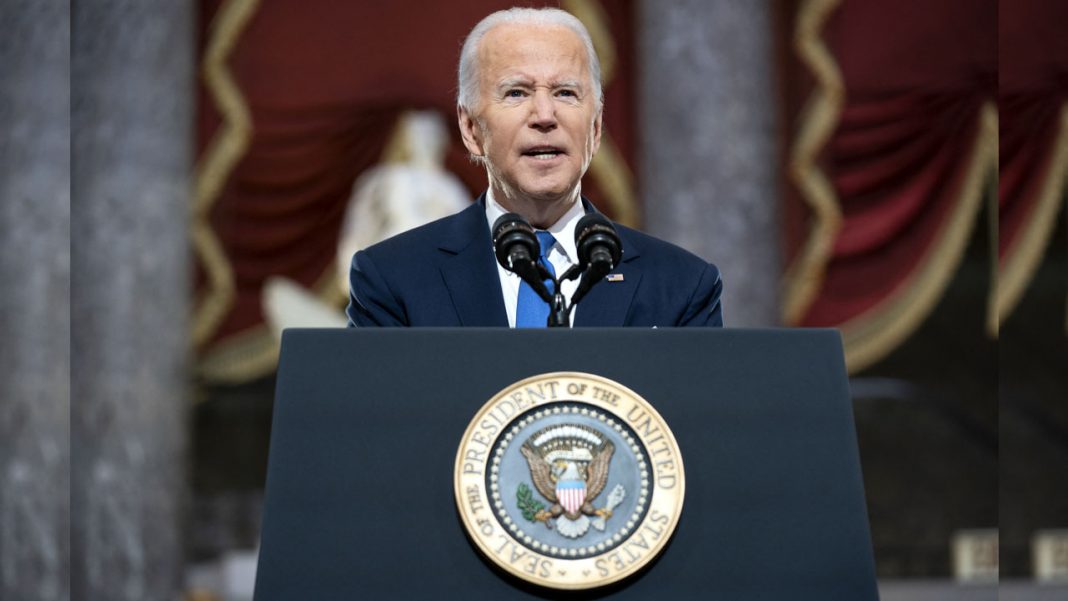 Joe Biden’s verbal assault on Donald Trump met with near pin-drop silence from top Republicans on Thursday’s anniversary of the US Capitol riot, ceding the stage to the fury of the former president whose personality still dominates their party.

The citadel of American democracy was under heavier-than-normal guard as Biden tore into Trump for instigating the riot with the “lie” that the 2020 election was stolen, which no court has ever substantiated.

But as Biden’s Democrats vowed “never again,” warning democracy will be on the ballot in November’s midterms and the 2024 presidential race, Republican lawmakers were conspicuous by their absence.

Instead, top Senate Republican Mitch McConnell, attending a late colleague’s funeral in Georgia, released a statement accusing Democrats of seeking to “exploit” the anniversary, while the party’s leader in the House, Kevin McCarthy, had yet to make public remarks.

With the nation stunned by the Capitol assault a year ago, both men had broken ranks to condemn Trump for stoking the violence.

Since then, however, they have quietly backed off — along with almost the entire party, bowing to Trump’s enormous influence with voters, and possible bid to return as president in 2024.

With no other leading Republican voices to guide the narrative, Trump filled the vacuum.

“This political theater is all just a distraction for the fact Biden has completely and totally failed,” Trump charged, in one of a rapid-fire series of statements pushing back at the president.

“Never forget the crime of the 2020 Presidential Election. Never give up!” Trump thundered, doubling down on his baseless claim that the election was “rigged.”

“Too many are hoping the American people will just look away and forget that that day ever took place,” Schumer said of January 6.

Like Schumer, Biden called on Americans to face up to the gravity of the Capitol riot — and draw the consequences.

“Close your eyes. Go back to that day. What do you see?” Biden said. “You’ve got to face it. That’s what great nations do. They face the truth, deal with it, and move on.”

One year later, most physical signs of the insurrection have been scrubbed away. Paint and blood smeared on statues have been cleaned off, smashed windows and doors replaced, and the ransacked offices of lawmakers repaired and reset.

But magnetometers installed after the insurrection remain at the doors to the House chamber, and the US Capitol Police force has been bolstered.

One Trump ally — Senator Lindsey Graham — did acknowledge the crimes of the rioters, hundreds of whom are currently being prosecuted.

But his statement was far from the demonstration of “unity” to which Vice President Kamala Harris appealed in her own anniversary address.

Instead, Graham assailed Biden’s presidency as “in free fall not because of the attack on our Capitol, but because of failed policies and weak leadership.”

‘Violence over voting’
Only two Republicans appeared to be present for the minute of silence held in the House for US Capitol Police officers who died in the wake of the unrest — outspoken Trump critic Liz Cheney and her father, the former vice president Dick Cheney.

“An extraordinary image of where this country’s politics are,” tweeted Democratic Senator Chris Murphy in response.

“If you move on without accountability for what happened on January 6, you are embracing the concept of violence over voting.”

Some Republicans appeared eager to whitewash the events altogether.

Marjorie Taylor Greene, a Trump acolyte who like him has been excluded from Twitter, convened a press conference with fellow far-right congressman Matt Gaetz “to expose the truth about January 6” and insist that what occurred was no insurrection.

Republicans and Trump supporters have been “smeared constantly over this past year,” Greene said.